Should Parents Tell Kids About Their Past?

How much should you reveal about your partying or promiscuous pasts? Depends on what kids ask, in part. Get insights here on where to draw the lines. 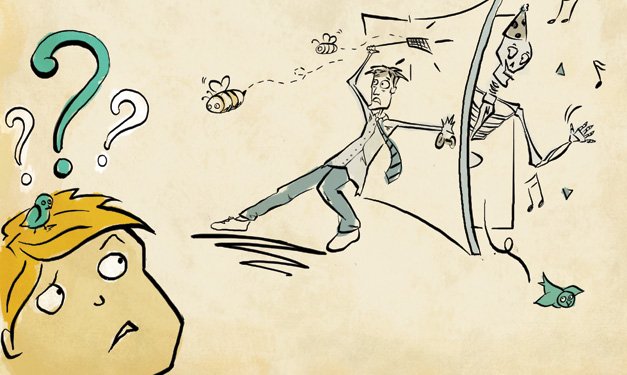 There’s a joke about a little boy who comes home one day and says to his mother, “Johnny told me where he came from.”

The mother, thinking her son is referring to how babies are made, launches into an elaborate discussion of sex and reproduction. Her son, jaw dropped, eyes wide, speechless, says, “Mommy – Johnny came from Denver.”

The moral of that story, says Eileen Bond, supervising faculty at the University of Michigan Center for Child and Family and a clinical social worker, is that parents have a responsibility to listen carefully to a child’s questions and determine what, exactly, they want to know.

At some point, every child asks uncomfortable questions about sex, drugs and the past lives of his parents. Do you offer just the facts, or add personal commentary? How much is enough? And when, if ever, should you share details of your own past?

“It depends on the age of the kid and their level of sophistication,” he says. “There’s a difference between saying a couple of sentences and going through an elaborate story where you get lost in the story, with no educational goal. Just answer the question that is asked.”

When Michelle (who asked to be quoted by first name only) from Berkley was asked by her 9-year-old daughter how a baby gets inside the mother, she told her.

“Just recently, she said something about when she gets married, she’s going to do that thing to get a baby, maybe after about a year, and she’ll do it one time. I said, ‘Well you do it for other reasons too, when you love somebody.’ She said, ‘Oh, why do you want to do it more? It’s gross.'”

Sexual education is one thing, but past deeds and indiscretions can be trickier.

Major studies find that talking with your kids about your own past can help your children learn from your mistakes. It doesn’t necessarily mean sharing gory details, but honest conversation can make a difference, according to a 2009 survey of teens at the Hazelden Addiction Treatment Center in Center City, Minn. Half the teens in the study said they would have been less likely to abuse drugs or alcohol if their parents had shared knowledge about their own drug and alcohol use as teens.

Michelle and her husband don’t drink, although they were quite “social” before they had kids. She insists on not letting her kids know that she drank when she was young and believes it is harmful to let them know because it might come across as permission for them to try it. She doesn’t want to reveal too much about her own past for fear of harming her kids’ reputations.

Everybody has a sordid past, she argues, but nobody really talks about it. And besides, it’s not relevant.

“I would tell them a little about me and their dad, but not before that,” says Michelle. “If they wanted to know when I lost my virginity, I don’t think it would be relevant. Maybe when they are adults and married, but as teenagers, they want boundaries – and if you tell them you had sex when you were younger, they might think, ‘That’s great, maybe I will.'”

“No matter how close you are with your kids, they’re still going to do things and not tell you,” says Michelle. “All you can hope for is that they think enough to not do something that is dangerous. If they feel confident about themselves, they won’t get hurt with drugs or sex. Parents need to teach their kids to love themselves enough to respect themselves.”

The irrelevance of openness

That can be easier said than done. David Sheff, author of Beautiful Boy, the 2007 tome that won nods from Oprah and the New York Times, thought he did everything right when raising his son, Nic, who was dangerously addicted to drugs for years. Growing up in a generation of drug-dabblers, where friends overdosed and otherwise endangered themselves with their habits, Sheff believed complete, straightforward honesty was the best policy when raising his son.

“I made what I thought was a wise decision at the time,” Sheff said in a phone interview. “I thought I would have some credibility in my son’s eyes if he knew I really did know what I was talking about, in ways that I thought were appropriate for his age. I talked about the temptation to use, which my parents never did. I understood that it was not just about the ubiquity of drugs, but the purpose of them – to feel better.”

Despite Sheff’s best efforts, which included telling his son about a friend who died from drugs, Nic still chose to travel a dangerous path of addiction.

Parents’ hands are tied, Sheff warns. If you lie, you put your entire relationship on the line, risk being caught in a lie and ruin any trust you’ve built over the many years of parenting.

But if you come clean, you run the risk of showing your kid that it’s fine to try anything because, hey, you’re still here to talk about it.

Either way, “It’s not going to determine whether your kid uses or not,” says Sheff. “The reason kids are going to use or not use has almost nothing to do with what their parents say.”

“It has to do with the relationship you have with your kids, and how open are they going to be with you,” he notes, “and how involved in their lives you are to perceive the struggles they’re having below the surface.”

Sheff’s son Nic struggled with depression and insecurity but hid those vulnerable stresses from the adults in his life. Plus, Sheff and Nic’s mother divorced and wrangled over custody – another stressor. “I saw what I wanted to see because I was in parent denial,” says Sheff.

In the years since, Sheff has talked with administrators and teachers who universally agree that, when they bring to a parent’s attention concern over troubles a child may be facing, most parents don’t want to hear it.

“I would like to think if a teacher told me my kid was having a hard time, I’d say, ‘Thank you. What can we do?’ Most parents get defensive, don’t want to hear it, blame other kids or teachers for it,” says Sheff. “It’s the opposite of the way we need to be.”

Make peace with the past

When Nicole Bopp was ending her first marriage, she discovered she was pregnant with a second child. Her son was a toddler at the time and she says, “I knew I would never get out of that marriage with two babies.”

So, she made the decision to terminate the pregnancy and complete her divorce. Her son, now 15, does not know about the abortion, but if he asked her point-blank if she ever had an abortion, Bopp says she’d be honest.

“I don’t regret that choice,” she says. “I don’t see anything I’ve done as a skeleton in the closet. Everything in my life is an experience, for better or for worse, no regrets – even my ex-husband, because you walk away with perspective and make better choices. All I can do is offer him honesty.”

Bopp has had discussions with her son about sex, but he has yet to ask how old she was when she lost her virginity. She’s ready for it, though.

“I don’t know what I gain from not being honest,” says Bopp. “All I can do is offer, ‘This is why it was and wasn’t a good choice at that moment. You’re going to do what you’re going to do and I’d prefer that you do it with open information from me than behind my back and doing something stupid.'”

Bond says it all depends on the parent’s intent. If a parent had premarital sex or smoked marijuana or got drunk as a teenager, and they can turn the experience into a “teachable moment,” then it becomes a tool to convey to their child an important life lesson.

But parents do not have to reveal all.

“A parent has rights, too, in terms of how much to disclose,” says Bond. “Parents can say, ‘It’s not something I want to discuss now,’ or ‘Let me think about that and get back to you.’ Push the pause button and respond, rather than react. Parents have the right to keep their private lives private.”

Also, if a parent has not made peace with his or her past experiences, they really should before discussing it with their children.

“There are shameful things that parents feel, and they have to come to terms with that first,” says Bond. “Shame should not contaminate their response. That requires reflection.”

Ultimately, whatever a parent decides to share with their children, they should listen carefully to determine what the child really wants to know. Don’t share details of adult sexual experiences or regale them with tales of getting high and feeling mighty.

It’s not about you, experts say. It’s about them.

Are they curious or conflicted? Respond to them; don’t project. Says Friedberg, “Children don’t ask questions until they are ready for the answers. Judge your child. Answer the question directly and wait and see them think and process and ask you another question. It’s the questions that guide you.”

Illustration by Sarah Kovelle. This post was originally published in 2011 and is updated regularly.