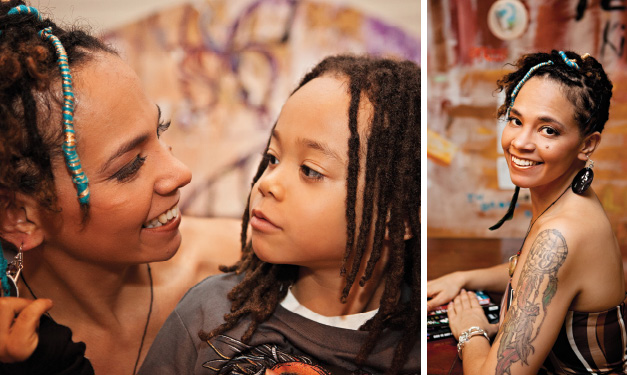 “I can bake cookies, bear babies, preside over revolutions

Get rings out of tubs, wear a suit, sport baggy jeans, slick my hair back

Or tie it up in braids – my aura is unafraid”

Delivered in a lightly raspy voice, those bold lines – from the manifesto “Black Statue of Liberty” – made jessica Care moore a star in the mid-’90s.

Today, the renowned performance poet remains true to her words, which are as empowering as ever and flow as easy as breath. moore, now 40, still knows how to make a statement on page and stage. And she rocks the role of mom to two boys: Omari, 17, and King, 5.

She’s forged that path. And, after shaking up the poetry scene in NYC and Atlanta, it’s lead moore back to the city where she grew up, represented by an old English “D” tattoo on her right arm, to bring her artistic flair home.

Going by the success of moore’s career – she’s a celebrated Showtime at the Apollo winner, has published three books and collaborates with a range of musicians, including hip-hop mega-star Nas – you’d think she was born a poetic force. But her roots are actually in journalism.

“I wanted to tell stories,” moore says. “I was very, very curious. I think I was more curious about the world than I was about poetry.”

That changed when she read Ntozke Shange’s dramatic “For Colored Girls Who Have Considered Suicide.” “I had already known the things they teach in school – the Shakespeare, the Robert Frost,” moore recalls. “I knew all the dead European men.” Now, she saw for the first time, this was a medium for her ideas.

Her mixed-culture childhood on Detroit’s west side was a factor, too. moore attended a mostly white Catholic school. Her mom was born in England and raised in Canada. “I saw myself in one way, and the world saw me as something else,” she recalls. “That really influenced my work.”

When moore’s father died in 1994, she read one of her poems at his funeral. Afterwards, a relative asked to buy her work. Inspired, moore began writing more frequently. Her work reflects her dad’s influence – “he’s like my angel in this,” she says – voicing activism and the hopes and struggles of a generation of strong women.

Serendipity kicked in during a 1995 family trip to New York City, when moore performed a few poems at an impromptu talent contest. The crowd went wild. She got an invite to compete on the Apollo show – which she won five weeks in a row, the first artist of any genre with that sort of streak.

Suddenly, the world noticed this spunky Detroit girl with big talent. “I went from not knowing how to get on the train and learning to get around New York City to people stopping me in the street, asking for my autograph.”

So, at age 22, she went home, packed up a pickup truck and “I said to my mom, ‘I’m gonna move to New York.'” She paid bills with a journalism gig. By 1997, she’d founded Moore Black Press and released her first book, The Words Don’t Fit in My Mouth. She’s since published two more, and books by other successful poets. In 1999, moore was named Woman of the Year by the Harvard Black Men’s Forum.

Marriage and motherhood shifted her scene to Atlanta in 2000. By then, new husband’s son, Omari, had become her own child.

“I took on that role,” she says. “We never used the term ‘step-mom.’ Ever.” Despite an eventual divorce from his father, her bond with Omari is strong. Mom even recently booked the budding DJ for one of her shows.

And she’s now a full-time mom to little King – a name captured in a dream catcher on her left arm – her son from a second marriage. “(He’s) my best friend, without question. He is the reason that I smile daily. Things can never get that bad when he’s in the room!”

In their Corktown home – moore moved back in late ’07 – her kid’s art hangs on the wall next to her own. And while King’s more focused on skateboarding right now, mom makes sure he’s exposed to art in all forms. Books are plentiful, as are paint brushes and glue sticks.

King travels with mom when he can, and the two video chat when separated. “Thank God for Skype!” moore says.

Even after 12 years away, she adds, Detroit is home. moore’s enjoying giving back to the art scene that gave her a start. And she’s experimenting. There’s a lengthy list of projects in the works, from a jazz album to a memoir to translating her work into film. And she’s still busy with Black Women Rock!, an effort moore created in 2004 to showcase outstanding music and stories.

“You grow; you’re constantly learning new things,” she says. “It changes you and it changes the kind of art that you make.”

Maybe she could say the same of those “baggy jeans.”

These days, moore’s out-of-the-box style walks the line of “peacock” and “Catwoman,” with an eclectic mix of funky hats and earthy touches. That may even spark her to design a clothing line, too.

It’s a heavy workload, moore agrees. But she wouldn’t have it any other way.

“I like the idea that I’m the decision-maker. I get to really, truly raise my son the way I want to raise him, and I don’t have to listen to anyone else.

“There’s something really powerful about that.”

And mom’s job has allowed King to have experiences moore herself didn’t get until she was in her 20s – something she considers a blessing.

“You have to be the example,” she says. “Don’t have white walls. (Art) makes for a more colorful life.”