Politics and Kids: Should You Pass on Your Opinions?

Raising children without your own biases. Is it harder than it sounds? Is it even necessary? Politically minded parents in Michigan have differing views. 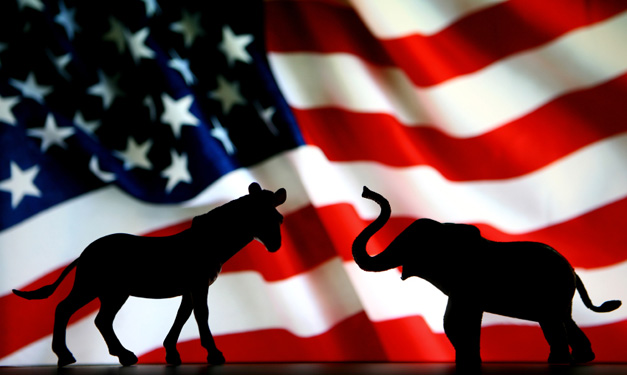 Presidential political campaigns have never been for the faint of heart, but this year the discourse has been nastier than ever. Insults about hand-size and, ahem, other parts of the anatomy that we tell our kids should not be discussed in public, let alone in a public forum between people running for president has made many folks shake their heads and wonder, “What do I say to my kids?”

When it comes to parenting children, there are different schools of thought for introducing kids to the polarized – and often confusing – world of politics. Talking with southeast Michigan parents, it becomes apparent that everyone has their own way of tackling this issue.

Remaining neutral on political issues is a common approach – or, at least, the goal. A number of metro Detroit parents think that teaching their kids to live by a certain code while withholding their beliefs will allow politics to emerge later, on the child’s own accord.

“I teach my child values and morals. It’s up to her how she interprets them in the voting booth,” says mom Sara Waldecker.

“My daughter is only 6, so ‘politics,’ insofar as parties, hasn’t come up,” says Sterling Heights parent Tiffany Danielle. “However, we do talk about issues.

“We don’t support a particular party; we support ideals,” she continues. “I think that’s a good way to raise our child.”

This echoes the words of one very famous political parent.

In her speech to the Democratic National Convention in 2012, Michelle Obama said that she and her husband were taught by their parents that “gratitude and humility” were virtues, and that they should “value everyone’s contribution and treat everyone with respect.” After listing off some of her and her husband’s core beliefs, she finished her statement with this thought:

“Those are the values Barack and I – and so many of you – are trying to pass on to our own children.”

Many parents, however, believe the idea of being completely politically unbiased with your children is wishful thinking. For them, the line between politics and morals is more or less blurred, so being candid about their beliefs is just a part of parenting.

“We raised our sons within our belief system and have been active in campaigning and volunteering for candidates, because that is the way we grew up,” says Shelby Township mother Carolyn Gammicchia. “Our oldest son, his first year voting, actually voted for the opposing party – and we were proud he made that choice.”

Despite her and her husband being candid about their views, “We raised him to be an independent thinker,” Gammicchia adds.

In this same vein, discussing your political beliefs with your kids doesn’t have to lead to indoctrination, as some parents maintain.

“It seems crazy that you would intentionally raise your kids without your own political bias!” says Kara Potts of Harper Woods.

She says political issues and stances were discussed openly during her childhood. “Even then, I didn’t always agree with them – but it was helpful to hear their opinions and perspectives.”

Think of a current political issue that you have a definitive stance on. However long this topic has been up for debate, you’ve since made your decision about how you feel about it – and why the other side is just plain wrong.

Now, imagine your child asks you about the subject. Before spilling out the talking points you’ve memorized so well or praising your chosen candidate, try to think how you would explain both sides of the problem in easy-to-understand terms. You may realize you know far less about the issue – and both sides’ takes – than you originally thought.

“I told my son who I’m voting for – then regretted it right away,” says Lara Alami of Troy. “I would like to explore all of the candidates with him, really listen to what he thinks and keep an open heart. I might learn a thing or two in the process.”

Anthony Salciccioli, formerly president of the Michigan Council for the Social Studies and father of three, believes that presenting political issues to children without bias is paramount in raising critical thinkers.

“Parents should seek out – and present – the most ‘primary’ sources available,” he says. “Primary sources have no inherent meanings, people-place meanings, upon them.”

To do this, he suggests parents teach children how statistics can be manipulated to push forward an agenda – and how political pundits and advertisements can mislead through visual effects and clipping of sound bites.

“While having this dialogue, parents should use ‘hedging’ language, such as ‘I suspect,’ ‘I suppose and ‘we speculate’ – instead of from the perspective of absolute fact,” he adds.

Most importantly, when you talk to your children about politics, try to keep an open mind and listen to what your child has to say.

“Do so in a fashion that facilitates their own thought processes,” Salciccioli advises. “Don’t use their brains as empty vessels to indoctrinate them with your personal beliefs.”

The common ground between political programming and complete neutrality may be balance: Teach kids to think, find accurate and reliable data and to be good people. The politics will come later.

How do you handle discussing politics with your children? Or do you avoid the topic? Weigh in below!