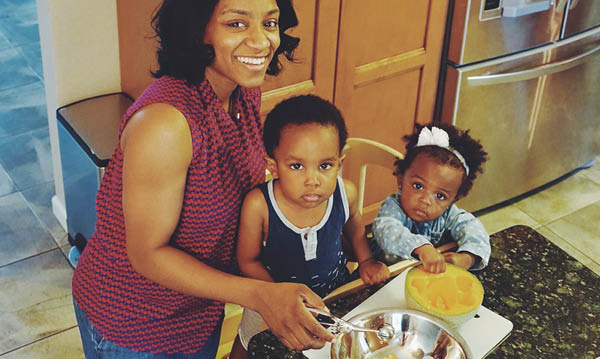 Since January 2017, this West Bloomfield mom has offered pop-up cooking lessons at local community centers including Ferndale, Detroit and Southfield.

It all started with a passion for fresh food – and a desire to start a business that could include her toddlers, who were 1 and 3 at the time of this interview.

“A cooking class works because if I have my kids there, no one ever blinks an eye,” says Cowles, who also works in digital advertising. When she was a child herself, Cowles says she regularly ate processed foods.

“If they’ve gone through the trouble of slicing it up, putting it in the skillet, putting it on the plate, then they’re like, ‘Well, wait a minute. I did all that work, I’ve got to try it at least,'” Cowles says.

Safety is a focus, too – especially for little ones.

Crew cooking classes for ages 5-10, which require parent participation, cover techniques, tools and caution in the kitchen. During lessons, also offered for ages 10-15, students have made everything from churros and gnocchi to frittata and German pancakes.

All along, they’re developing lifelong skills of cooking and choosing healthy, nutritious food, one meal at a time.

“The goal is for them to be able to go back home and be able to cook one of the meals for their family. It’s really the confidence I want them to learn.”

Watch for a possible brick-and-mortar location in the future, Cowles adds.

Preheat oven to 375 F. Lightly brush tops of each tortilla with coconut oil. In a bowl, combine vanilla, cinnamon and 2 tablespoons sugar. Sprinkle this mixture on tortillas.

Bake tortillas on an ungreased baking sheet, sugar side-up, for about 8-10 minutes or until edges start to curl. Remove from oven and slice each tortilla into 8 equal wedges. Allow chips to cool.

No need to carve your pumpkin this Halloween. Here are some fun no-carve pumpkin ideas to try with your kids.
Read more
Guides