A recent study found kids prefer the 'real thing,' but a local expert explains that imaginative play has critical benefits, too. 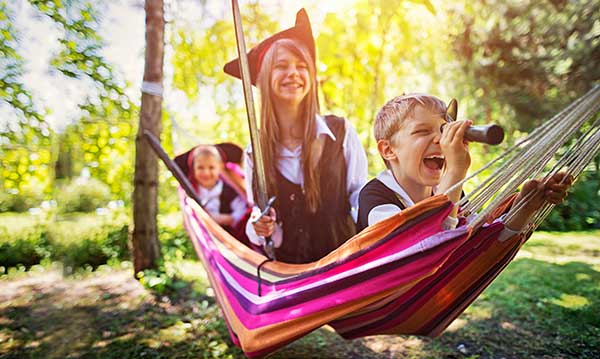 Getting kids engaged in imaginative play is often a top priority for parents of preschoolers. But should it be?

One recent study questions just how much parents should emphasize pretend play over opportunities to try the “real thing.” The study found that kids ages 4 to 6 preferred “real” activities – like eating ice cream or feeding a baby – three times more often than they did the same activities in make-believe, a Dallas News column by the study author, University of Virginia psychology professor Angeline Lillard, reports.

When it came to things like riding a horse or cutting up vegetables, more kids wanted the real thing over the imaginative-play version.

While the study participants preferred pretending about a third of the time, some of the kids said it was because they wouldn’t break things like play dishes or get burned on a pretend stove.

“But how often do we as parents relegate children to pretend activities that they could do for real, and we thus deprive children of the sense of accomplishment they could have?” Lillard wrote in the Dallas News column, which was titled: “Playing make-believe can deprive kids of important developmental experiences.”

So should parents make changes, or even cut out pretend play opportunities, to avoid “depriving” their kids? Absolutely not, says licensed psychotherapist Adam Walker with Sollars and Associates, who also serves as classroom clinician at Walnut Lake Preschool in West Bloomfield.

“I agree that children do need opportunities to feel like they’re important in the world, like we take them seriously and like they have a role to play,” says Walker, who specializes in working with children ages 3 to 13.

But it shouldn’t be suggested that imaginative play could be harmful or unnecessary, or that it somehow takes the place of real-world experiences. The two aren’t mutually exclusive, Walker points out.

“I think it was worded to cause a stir,” he says. “But we should be talking about giving children these opportunities to have a little more responsibility and to be taken ‘seriously’ in the sense that we’re respecting what they’re trying to communicate and ‘seriously’ as future adults.”

Encouraging real-life experiences instead of play brings up a slippery slope, too, since it’s not always safe or feasible to let kids play with real kitchen utensils, feed a baby instead of a doll, and so on.

“If I show any child a picture of real ice cream versus wooden ice cream, everybody knows what they’re going to pick,” he says.

And the benefits of imaginative play shouldn’t be minimized.

“I have absolutely no doubt that make believe is so incredibly important for children because they get to experiment, they get to try things out, they get to look at something from many different angles,” he says, pointing out that realistic toys aren’t even necessary. “I have blocks in my office that children make believe are families … their imagination is rich.”

In Walker’s practice, children often use make-believe to act out difficult situations and share how they feel.

“It’s the only way they have to communicate and make sense of what’s going on,” Walker says, calling out the first line of the column that calls pretend play a “charming” activity. “It’s not really charming. It can be if you want to minimize it. It’s not always.”

But overall, Walker does agree that it’s beneficial for parents to take the extra time to involve their children in cooking, cleaning and other “real-world” activities when it’s possible.

“It takes extra work to incorporate a small child into your routine, but that work will pay off. Find a safe job that they can do,” he encourages, like putting chopped veggies into a bowl or helping rake the leaves. “It will take them a long time, it won’t be done the way you want maybe but they’re contributing and they get a real sense of what it takes to maintain a house and they also get the satisfaction of being thanked for their job.”

And parents should remember it’s also important to encourage their child’s imagination.

“Ask your kid what their play is instead of telling them something looks cute or that they have to hurry up and stop,” he suggests. “Take that extra five minutes and say, ‘So, what’s this?'”