Learn about American flag display etiquette, the rules of the United States Flag Code and more. 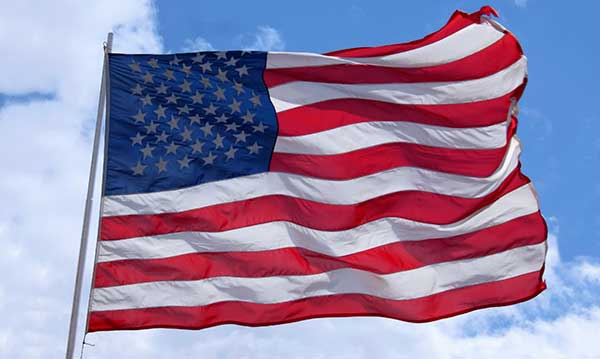 The red, white and blue flag of the United States of America has many nicknames, along with several patriotic songs paying homage to it. Even the holiday Flag Day, which is celebrated on June 14, is all about honoring our country’s flag and its adoption.

But did you know our country’s flag even has an established United States Flag Code? There are certain guidelines for displaying the country’s flag, and learning how to properly respect the flag is important.

“Especially to veterans, it’s something we always looked at when we were overseas,” Jack Hall, U.S. Air Force veteran who served in Vietnam and chaplain of the Veterans of Foreign Wars Acorn Post 1669 in Royal Oak. And it’s significant information to teach kids. “It’s just part of being raised – learning to say the Pledge of Allegiance and what the flag means and (having) respect for one of the symbols of our country,” he says.

This Flag Day, brush up on proper American flag etiquette so your family can proudly and respectfully wave the grand-old, high-flying flag at your home all year round.

Here’s a summary of the American flag display etiquette for civilians according to the code:

When a flag is displayed at half-staff (meaning it’s positioned halfway between the top and bottom of the pole) the U.S. Department of Veterans Affairs notes it’s to signify the nation’s mourning, whether nationally or locally, as declared by the president, governor of your state or territory – or depending on the jurisdiction – by heads of federal government departments and agencies. You can find out when and why flags are displayed at half-staff here.

To raise a flag to half-staff, you should first hoist it to the peak, then slowly lower to the half-staff position, the code states.

U.S. flag etiquette: What you shouldn’t do

Out of respect for the American flag, the United States Flag Code outlines what not to do with the flag. Here are a few key points:

Care and disposal of flags

Over time, displaying your flag may cause wear. Although not discussed in the United States Flag Code, USA Flag Site suggests you care for your flag by cleaning it and also mending it if needed.

When disposing of an old, worn flag, the flag code states the flag should be “destroyed in a dignified way, preferably by burning.”

Though not specified in the code, the Veterans of Foreign Wars website explains fires for disposing of flags should be large and of “sufficient intensity” to fully burn the flag. Fold the flag in its “customary manner” and place it on the fire. Next, come to attention and salute the flag, recite the Pledge of Allegiance and allow for a moment of silence. Afterward, extinguish the fire properly and burry the ashes. (VFW notes you should check with local fire codes, too).

Hall says the VFW collects flags to see that they’re properly burned. You can even contact your local VFW if you’d like help disposing of your flag respectfully.

For even more details on proper American flag etiquette, you can find the full United States Flag Code here, describing additional display guidelines, including those for various other institutions and situations, as well as more detailed explanations for certain areas of the code. You can find answers to several frequently asked questions about U.S. flag etiquette on the Flag Rules and Regulations page of ushistory.org.

How busy moms can really — and should — make time for themselves.
Read more
Health