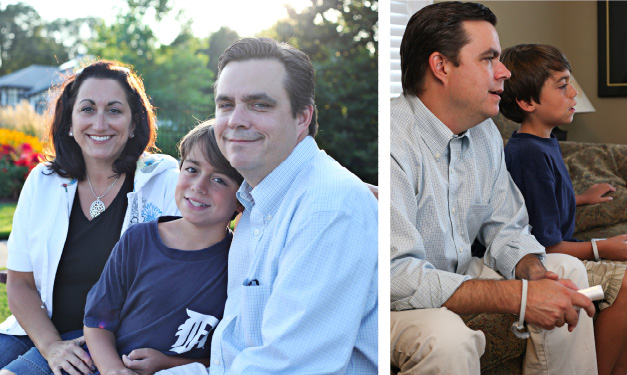 This story appeared in the September 2010 print edition of Metro Parent.
Photos by Kristen Hines

The Motor City is Craig Fahle’s bread and butter. Every weekday on Detroit Public Radio’s The Craig Fahle Show, the reporter chats up the city’s shakers, difference-makers and station listeners on hot topics from politics to art.

But when he breaks it down for Career Days at local schools like his son’s, his job at WDET 101.9 FM is pretty simple.

“I get paid to read, talk to people and try to help other people understand certain things that are going on,” he says. “I just happen to do it into a microphone.”

And how. Fahle figures he talks to 2,000 folks a year for his two-hour segments. At day’s end, though, there are two that matter most: His wife Debra, and son Alex, who’s 11. Hearing dad’s voice on the radio is second nature to Alex, Fahle says. Not that it’s a primo pick on the pre-set.

“Gubernatorial candidates: How exciting is it going to be to a kid?” Fahle quips.

Still, pop has some cool cred. As a kid, he worked at a couple of local indie record stores. He later fell into a DJ gig at U of M-Dearborn, spinning tunes on the student station. It was there that the broadcast light bulb went off.

A hometown guy, Fahle started as an intern at WDET, where he’s spent most of his career. “I left twice and returned twice,” he says – most recently, from a North Carolina station. Then Detroit called him back.

He checked with Debra, and “It’s the shortest conversation we ever had. We missed it, frankly. We like it here and we always have.”

That pride – and deep-rooted knowledge, particularly in politics – makes him a pro at interviewing the D’s bigwigs. Even when the going gets “feisty,” Fahle tends to sound calm, open and even friendly.

“Most people come by their opinions honestly,” he’s learned. “Just because you don’t agree with someone doesn’t mean they’re wrong.”

Sounds like good fatherly advice, too. And having a kid definitely has impacted Fahle’s take on the topics, whether education, economy or the Gulf oil spill.

“You’ve got skin in the game,” as he puts it – likely because Fahle’s also a diehard Lions fan. Ditto for the Tigers. You might catch the family at Comerica Park or other haunts like The Henry Ford or Detroit Science Center.

If they’re not unwinding with a little Wii at home in Grosse Pointe, father and son also hit the strings: Alex is learning violin, while Fahle’s picked up guitar. Dad still keeps his iPod packed with playlists, too (after all, the WDET station has some 50,000 titles!).

A self-described optimist, Fahle has plenty of hope for Detroit’s future, despite his challenges. He even sees it becoming a place Alex might want to live one day.

“Not everybody’s motives are bad,” he says. “I do think we’ll get to a better place.”

Gig: Host of The Craig Fahle Show on WDET radio
Dad declaration: I just want my son to be his own person – and be confident in that.