Your child could be the next big innovator of his or her generation. Here are seven tips for raising a business savvy kid with entrepreneurial chops. 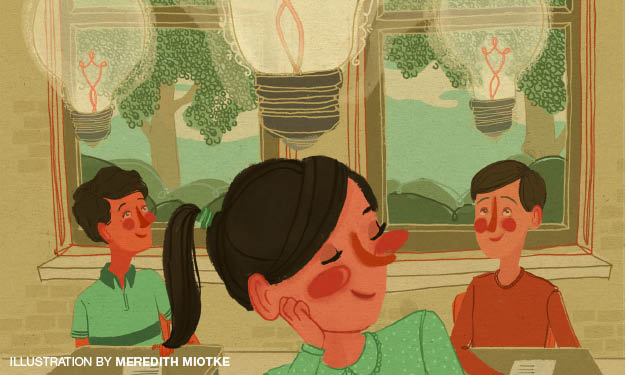 What’s the difference between a child who becomes an innovator and the one who doesn’t? If you ask entrepreneurs in the metro Detroit area, that answer comes down one thing: risk. And it’s a key component when it comes to raising a business savvy kid.

Children who learn to take risks and accept that sometimes their ideas turn out – and sometimes they fail miserably – are the ones that go on to become innovators. It’s a lesson that seems to reverberate throughout southeast Michigan thanks to the legacy of Henry Ford. As biographers are quick to point out, Henry Ford didn’t invent the automobile, nor did he succeed at business right away (his first two shuttered). But what he did have was the creativity and drive to keep going, eventually developing a new way of manufacturing cars that your kids read about in their textbooks.

That spirit of innovation is still alive and well in Detroit. As area entrepreneurs look for ways to build up our communities – and our local economy – they see inspiring children to become innovators as key. Here are their insights on what it takes to raise a biz kid.

“I think one of the most important qualities that children can develop is to be goal driven,” says Wendy Fichter, former director of small business development at the Dearborn Area Chamber of Commerce, in talking about helping kids become entrepreneurs. “We’ve all heard that old adage, ‘If you fail to plan, you plan to fail.'”

Guide your children through setting goals by starting simply. Talk to them about coming up with something they want to learn or do that they can’t right now. Then have them write down their goal, along with the steps and timeline to achieve that goal. For example, say your 5 year-old really wants to learn how to ride a bicycle – that can be her goal. She can write down, “Ride a bike” or she could even draw a picture of it. Discuss what she’ll need to do to accomplish her goal. Maybe she needs to practice riding for 15 minutes each day for three weeks. She can post her goal somewhere where she’ll see it often, like on the door to the garage or the refrigerator. Breaking down a goal into manageable parts that your child understands and can track will help her feel like she’s progressing. Don’t forget to celebrate her achievement once she meets her goal – and then to have her set a new one.

Let kids do it their way

As a parent, it can be tempting to rush in and explain to a child how to do things, “the right way,” whether it’s loading the dishwasher, cleaning up a room, or working out algebra problems. Yet this approach can discourage kids from figuring out how to do things on their own. “You need to give (children) the opportunity to do something without hovering,” says Fichter, a mother of three grown children. “They need to know that they have free reign and that you don’t mind how they do it as long as they get it done.”

Giving your child tasks around your house might be one place to start. First, you can show your child how you would do something like raking the leaves in the yard or making dinner (depending on your child’s age and interests) and then let him come up with his own approach. My 10- and 12-year-olds are tasked with cleaning the kitchen floors once a week. They’ve come up with a system that’s shaved the time it takes them to finish down to under 10 minutes. One, on hands and knees, sprays the cleaning solution while the other follows – a small rag on each foot to dry each spot. (They’ve even added in music, so they can scrub to the beat.)

Allow kids to reach their own conclusions

Part of innovation involves creativity by seeing that problems can have multiple solutions. “One thing I try to do – and I’m not perfect at it – is to help my kids reach their own conclusions,” says Josh Linkner, a tech entrepreneur, best-selling author and former CEO and managing partner of Detroit Venture Partners. With his two children – Noah and Chloe – he tries to ask open-ended questions to fuel conversation.

Exploring ideas together helps kids imagine various possibilities. “They come to view the world as something fluid and ever-changing,” says Linkner, who believes it’s vital for kids to develop critical thinking skills to succeed in today’s world. Gone are the days where kids could just memorize facts as a way to learn. “Today things are changing rapidly in everything from technology to geopolitical systems. It’s much more important to teach children to think. … Facts and figures are going to change; it’s teaching them how to think that’s important.”

When Pam Turkin first considered the idea of leaving her corporate marketing job behind in favor of starting her own cupcake shop in Michigan, she enlisted her family as support – and her workforce. She tried out different recipes for her kids to sample and critique. At the time, she had two kids in high school in North Farmington. And when her first Just Baked store opened its doors in 2009, her kids were there to pitch in.

“I believe kids mimic what they see at home,” says Turkin. Even if you aren’t a business owner, look for ways to share your work experiences or passions with your children. They’ll learn from your example.

Expose your kids to people and ideas from a variety of cultures and backgrounds – not just your own. Linker calls this approach “maximizing diversity” and goes on to explain the reason for it: “Generally speaking, kids are exposed to the same type of people in the same type of socioeconomic circumstances as they are, which leads to a sheltered point of view.” Having more diverse interactions can provide kids with a different perspective and a new way of looking at things that in turn can encourage them to think through problems creatively.

Henry Ford, who was born and raised in what’s now Dearborn, used lessons learned from the meat-packing industry as the inspiration for a car assembly line. To construct automobiles, he used insights he gained from gun, watch and bike makers. For your kids, seek out opportunities for them to become more acquainted with other cultures – not just in the sense of people from other parts of the world, but other economic or social backgrounds, too.

“Parents really need to teach kids the art of speaking,” believes Turkin, who noticed that her younger employees often felt uncomfortable in speaking situations and in meetings. Turkin, who now has several stores throughout southeast Michigan, taught her employees how to conduct themselves in meetings – and how to communicate their ideas confidently to a group.

“Everyone can write an email, but being able to talk and communicate is very different,” Turkin says. Guide your children into being more comfortable expressing their ideas by giving them chances to share their opinions. Use dinner as a time for conversation, not just eating. In the car, turn down the radio and discuss topics that pique your child’s interests – from whether the Silly Bandz fad may come back again to who their favorite character is on a TV show. Tweens and teens might want to share their thoughts on local or world events. The idea is to help them become comfortable talking through their ideas and learning how to express them to someone else.

Part of fostering a sense of innovation in kids is to cheer on their efforts at trying new things. “One thing I think we as adults tend to do is to be critical or harsh, which creates an environment of fear that can stay with a kid deep into adulthood,” Linkner says. Instead, Linkner believes parents should encourage kids to take risks. Through trial and error, kids learn how to develop their ideas. “I think a good required course in every middle school should be ‘Making Mistakes.'”

When my tween first started work on her science fair project in eighth grade, she was determined to make a working waterfall. After constructing a design she found online, her waterfall did little more than propel a trickle of water through a complex system of tubing that went from one bucket into another. She scrapped most of the tubing in favor of her own blueprint, which involved a configuration of plastic spoons and PVC pipes. The eclectic design didn’t look anything like the sleek versions she had first tried, but the water flowed from the buckets, and the design was all hers.

That message – of working through mistakes and not being defeated by them – isn’t just something that’s helpful at home. In a greater sense, Turkin sees it fitting into a comeback for the region. “If you look at the drivers of the resurgence in Detroit, anyone who’s at the forefront of this will tell you we’re really trying to encourage kids to set out to learn from their failures and keep going.” After all, that sense of not giving in to defeat is part of Detroit’s identity. “We’re kind of gritty,” says Turkin. “We’re able to pick ourselves up, dust off our shoulders and get back to work. We’re used to getting knocked down and picking ourselves back up. That’s the kind of spirit and drive of Detroit. You can feel it right now when you drive into Detroit and see the businesses popping up. There’s a sense that if you have a great idea and you’re willing to work for it, Detroit is the place to be.”

This post was originally in published in 2013 and is updated regularly.