Sure, their emotions run high, but so does their potential – if you know how to handle them. Learn more about raising a highly sensitive child. 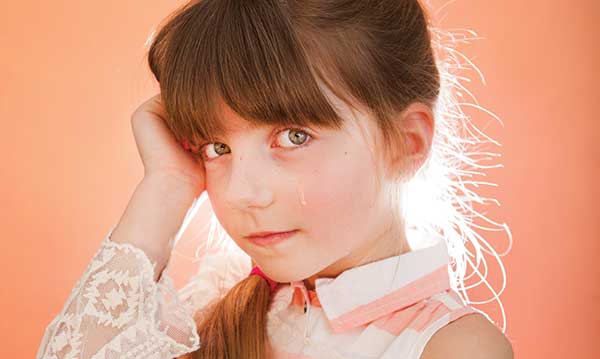 Lisa B.* describes her 9-year-old son as an “interesting character.” He always has to have the tags cut out of his clothing or they drive him crazy, she says.

He’s “slow to warm” with strangers, and the separation anxiety he suffered in preschool has morphed into a more generalized stress that keeps him up at night.

He sometimes complains about physical symptoms like headaches or nausea, which seem to be related to external changes such as having a substitute teacher at school.

And since he’s never liked the pressure of hosting his own birthday parties with lots of kids, Lisa and her husband treat him to family outings instead.

“We tell him his mind worries a lot, but we’re working on it,” says the Hartland mom, who has taken her son to therapy to help him talk it out.

“I used to wonder if he was being stubborn or asserting his independence, but I’ve come to realize some things just really bother him. It’s just the way he is.”

Lisa has never put a label on her son, but one researcher does has a name for the fourth-grader’s disposition. According to Dr. Elaine Aron, he’s probably a Highly Sensitive Child.

Aron, an author and psychotherapist based in Mill Valley, California, has been studying the innate trait of high sensitivity since 1991.

Highly Sensitive People (who start out as Highly Sensitive Children) are attuned to sensory feedback most of us ignore – the seam of a sock that rubs the wrong way, subtle odors in a room, an item on a shelf that has been moved ever so slightly.

They begin as infants who may be awakened at the slightest sound and are startled often.

As they grow, they continue to be easily overstimulated by light and noise – and can become agitated, upset or even have meltdowns over seemingly trivial things, leaving parents frustrated that everything has to be “just so” to keep peace in the home.

But their sensitivity goes beyond the five senses. HSCs can be more aware of virtually everything around them – the moods of loved ones, a slight alteration in their routine, violent scenes in movies, their own inner life and even social injustice on the playground.

HSCs present unique parenting challenges, Aron says. They may complain a lot or descend into tantrums and rages to avoid what irritates them – or in reaction to it.

They may refuse to talk to others, prefer to be alone or avoid “normal” kid stuff like the soccer team, summer camp and play dates because of the inherent stress and competition they bring.

Since they are in the minority, an HSC’s preferences and reactions may seem odd to their parents as well as their peers. Yet on the upside, HSCs are actually gifted with the ability to take a deeper dive into many things the rest of us don’t even notice.

They may be extremely empathetic and socially aware. They tend to seek meaning in their lives very early and feel all emotions deeply – including joy and happiness.

And this, Aron says, presents a unique opportunity for parents who are, themselves, highly sensitive to their HSC.

Through countless surveys and deep analysis, Aron has concluded that about 15 to 20 percent of the population is highly sensitive.

The trait arises from an active “behavioral inhibition system” associated with the right hemisphere of the thinking part of the brain (the frontal cortex).

Although HSPs are a minority, they play an important role in evolution, Aron proposes.

Think of two deer at the edge of a meadow. After a cursory glance around, the first deer runs out to eat the grass. The second deer, on the other hand, lingers to look more closely for danger, and listen for any unusual sounds before stepping into the clearing.

The balance of both approaches leads to survival of the species. The more sensitive deer risks missing out on the choicest grass and may suffer over time due to its tendency to “pause and check,” Aron says, but if the first deer is killed by a predator due to its impulsivity, the second deer survives.

Yet being highly sensitive, pensive and cautious isn’t always prized in our “go get ’em” society, and sensitive kids – along with their parents – can feel the societal cues that they are different.

“With a few bad experiences, they are more likely than others to become shy, fearful or depressed,” Aron says. “HSCs do better than other kids in good environments and worse than others in bad environments, so parenting is crucial.”

Ironically, HSCs are more sensitive to their parents’ moods, expectations and feedback – along with everything else.

Aron suggests that parents listen to their children, validate their preferences and strive to understand the cause of their meltdowns. In effect, the more sensitive parents become, the better equipped they will be to handle their HSC.

With a little gentle guidance, Highly Sensitive Children are creative, cooperative and kind.