Understanding the feelings of others and caring about those feelings can be tricky for kids. Parents play a big part in boosting this quality. Here are tips for raising kids with empathy. 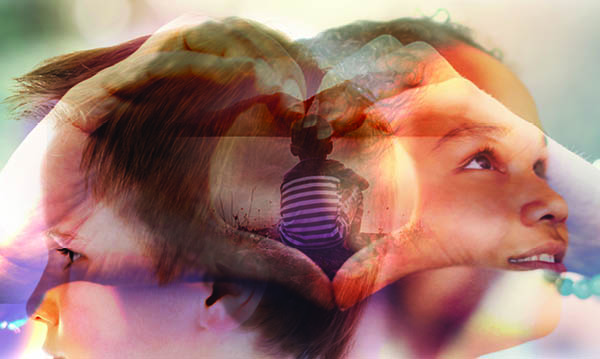 When it comes to empathy, Amy Martin says her daughter’s a natural.

“I feel like from the minute Claire was born she’s always been on the lookout for others,” says the Northville mom. “She’s the first to point out the goodness in other people. Over the years her teachers have seen she’s the kid who takes to heart others kids’ situations. She’s inspired me to be more empathetic.”

Claire is quick to volunteer for causes in the community, Martin says, which led girls activewear store ivivva to choose the 13-year-old as a brand ambassador when they opened at Twelve Oaks Mall in Novi.

Yet for Martin’s 12-year-old son, it’s a little harder to walk in someone else’s shoes.

“We’ve raised them the same, but they’re 100 percent different when it comes to empathy,” Martin says. “One of my children just looks out for other people and the other one – not so much.”

Martin’s son is of the mindset that he can take care of himself, so why can’t his friends? If a hockey teammate has an epic fail, it’s probably a result of his own bad decisions.

It wasn’t until he volunteered for an organization that refurbishes bikes for needy kids that a cause really hit home.

“To him, going biking with his dad is one of his favorite things. When he realized not all 12-year-olds have bikes, it made sense to him,” she says. “You have to dig deep to find something he can relate to, so he can have compassion to think about somebody else.”

If the shoe fits

Empathy, defined as an awareness of the feelings of others, is a key component of emotional intelligence. It requires the imagination to actually see life through someone else’s eyes, not just through the veil of your own perspective and bias.

And some are just born with it.

“There is a genetic component,” says Kotrba, who leads Thriving Minds Behavioral Health in Brighton. “It seems that genetics explains one-third to one-half of the variation in children’s empathy.”

Yet while empathy is a gift that comes more innately to some, it can be cultivated in others. Mature empathy can take well into adulthood to fully develop, Kotrba says. It requires having a wide array of life experiences and being able to generalize those experiences, so you can conceive what others are going through, even if it’s not exactly the same.

Cultivating empathy is a lifelong process, but it begins in early childhood – and parents play a key role.

In other words, empathy can be taught. And it’s never too early.

One step at a time

For infants and toddlers, the world revolves around them and their needs. They have difficulty with empathy, Kotrba says, because they can’t fathom the perspective of others. Around ages 3 to 4, they begin to read the facial expressions and actions of others and react to them. For example: You hurt yourself, say “ouch” and make a face, and your daughter realizes you’re feeling pain.

“This is considered the development of emotional empathy,” Kotrba says. Between ages 5 and 8 comes the dawn of a “theory of mind,” which includes the ability to step into another’s shoes and take their perspective even without reading facial expressions or body language.

During this phase, your daughter might realize something she said to a friend was hurtful because she can relate to how it would make her feel. Or, when your son hears that a classmate’s dog died, he knows they must be feeling sad. This is the emergence of cognitive empathy.

Even with the littlest children, parents can point out how others are feeling and encourage kids to think about others’ thoughts and experiences, both in real life and through characters in books and movies.

As children grow, parents can expand the discussion and ask open-ended questions about how others might be feeling and why.

For a child older than 8, parents can express empathy for others and talk about their own past experiences to show the possibility of empathy even when the child doesn’t have a personal context or doesn’t agree with the actions of others.

“We can be empathetic even when we would not have made the same choices or have the same experiences,” Kotrba says. “Additionally, children should be taught to not just feel empathy, but also to problem-solve ways to help.”

Along the way, it’s important for parents to be good role models, using kindness and empathy when listening and relating to children, when talking about others, and when reacting to needs in the community.

Nonverbal communication also plays a role. “Parents can model appropriate body language when being empathetic and compassionate toward others, such as a soft, calming voice, touches, attention and eye contact directed toward the ones who are hurting,” Kotrba says.

There’s no doubt, she adds, that empathy is important.

“Empathy is the primary motivator for helping others,” Kotrba says. “Without empathy we don’t have either the desire to help or the understanding of how we can help.”

5 ways to encourage empathy in your kids

According to Dr. Bob Sornson, founder of the Early Learning Foundation, fear interferes with the development of empathy. If children feel worried or insecure, they stay focused on themselves. Learn to set limits with respect and love and establish routines at home and school to build a sense of predictable security. Teach kids self-regulation skills, so they feel calm and strong on the inside.

When children feel safe and capable, they can turn their attention to others.

“By learning to calm themselves, regulate emotions, delay gratification, persevere and stay focused on the right things, children develop the skills that allow them to look beyond themselves,” Sornson says. “To look out into the world, look past their own needs and see the needs of others.”

Even the littlest kids can identify emotions, according to family counselor and author Tara Michener of Michener and Associates in Novi. Michener shared feelings flashcards from Self Esteem Shop in Royal Oak when her own son, Cannon, was just an infant.

“I would show him these faces – a baby that was crying, a baby that was laughing, a baby with a quizzical expression,” she says. “Then I would hold up a mirror and show him his own face. Kids eat that up. They’re not too young to learn about these things, you just have to do it on their level.”

Identifying their own emotions is the first step in realizing others have feelings, too.

Now that Cannon is older, Michener and her husband Jason continue to emphasize empathy.

“It is a focus in this house,” she says. “If ABCs are important to teach, so is empathy.”

Lauren Romeo of Northville founded the Main Street League in 2013 out of an inspiration to help neighbors in her own hometown.

The group gives back about $80,000 a year to people in the community, and Romeo says members try to involve kids in several projects a year. Her own children, Charlie, 8, and Hudson, 5, have helped stuff supply bags for Project Night Night and the Ronald McDonald House. In another effort, older kids were challenged to go to the grocery store and shop on a Bridge Card budget.

Romeo says when kids see adults participating in service projects and helping others in everyday life, they are inspired to follow suit.

“You just need to be aware, open your eyes to the people around you. There’s always people around that need you and your kindness,” Romeo says.

Basia Kiehler, a past principal at Hawkins Elementary in Brighton, says her school has seen tremendous success using The Leader In Me program, which teaches The 7 Habits of Happy Kids. “When students are given opportunities to be kind to others that may need their help, this teaches empathy,” Kiehler says. “All students love to help.”

Kiehler suggests parents urge kids to be leaders in their classroom, school and community.

“I also encourage parents to praise their child by using specific language about the action that their child has taken,” she says. “For example, ‘I really like how you went out of your way to open the door for the elderly man. You saw that it may have been hard for him and you stepped up like a leader to help. Thank you.'”

Relationships matter. Help kids build relationships that inspire them to trust and care for others. Kelly Hermann, founder of Kelly’s Kidz, suggests parents help their children reach out to make new friends, even with kids who are different from them.

Hermann’s daughter has cerebral palsy, so the Canton mom makes it a point to talk to Maggie’s middle school classmates about how she is different, yet very much the same. She also organizes outings that pair typical and special needs kids together to work toward a common goal.

“Don’t be afraid of approaching someone. You never know what kind of relationship will grow. Then, as a parent, be patient, sit back and let it happen,” she says.