This Bloomfield Hills father of three kids is a crusader for bats in southeast Michigan with the Organization for Bat Conservation. 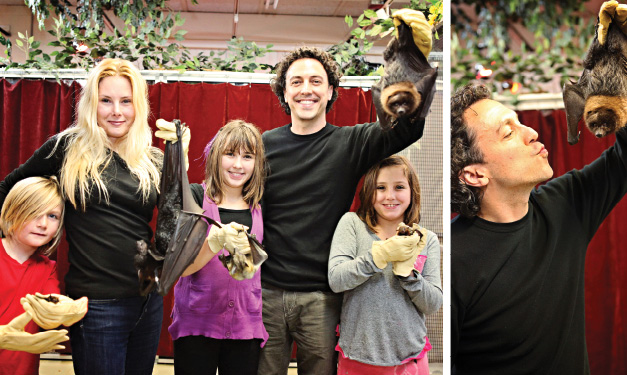 This story appeared in the October 2011 print edition of Metro Parent. This venue permanently closed in February 2018. Many of the bats are moving to the Detroit Zoo in Royal Oak.

It’s fair to say Rob Mies is a “batty” father. Heck, even he calls his family’s goldish-beige Ford “The Bat Van.” But a bona fide Bela Lugosi? Sorry, kiddo. Not quite.

That’s news that Mies, who runs the Organization for Bat Conservation, once had to break to a first-grade boy during one of his school presentations.

“He kept asking questions about vampire bats,” Mies recalls. Finally, the kid got to it: “Do you work with vampire bats?” Mies sure does. “That’s what I thought – because you have a vampire bite right above your lip.”

Laughing, the dark-haired dad explains, “I have two moles there!”

Consider it just one more bat myth he’s busted over the past 17 years.

Tucked in the Cranbrook Institute of Science, Mies’ nonprofit houses 150 “orphaned and injured” bats rescued from around the world, plus a few owls, sugar gliders, a flying squirrel and rare two-toed sloth. Each year, some 100,000 folks meet at least a handful, either at their Bat Zone “retirement” home or in the high-energy, hands-on programs Mies hosts across the country. And his own three kids chip in, chopping up fruit, cleaning cages and even training the winged guys.

“I never push them,” Mies says. “They bug me constantly to work with the animals.

“They think it’s the coolest thing in the world!”

Dad’s own passion for the nocturnal mammals started back in 1992 – in a swamp. Back then, he was an enviro-law student with sites set on becoming Senator Mies.

“I thought that was the best way to influence and protect our natural resources,” he says. Until that fateful July he spent battling mosquitoes and leeches in the sweltering heat, helping track bats with an Eastern Michigan University research team.

“Watching how they fly: Where are they going? How do they loop like that?” Mies says. “Your brain goes crazy with all the questions. I really got hooked.”

As he learned about the critters’ critical role in nature (“They’re seed dispersers and pollinators and insect eaters”), Mies also realized how endangered bats are – and misunderstood.

“They’re so beneficial,” he says. Yet, “they’re kind of the underdog.” So, with that, he scrapped Washington for rainforests, co-founding the bat org with fellow EMU student Kim Williams here at home.

“I wanted people to get interested in ecological science, not laboratory science,” he says. Harnessing children’s natural curiosity is a big part of his mission.

“Most kids are just generally fascinated by bats. They’re really thrilled with the opportunity to see these animals. Literally – thrilled. Rarely are kids nervous.”

For Mies himself, bats were no big deal growing up in Westland. He first spotted them by a street lamp as his older three sisters played Frisbee on the front lawn.

“I just found them interesting. I didn’t know anything wrong.”

Adults can take a little more convincing. While stereotypes about bats being blind or getting tangled in hair (both untrue) have waned, rabies is a nagging one.

Granted, more than 60,000 people die annually from the infection. But guess from where? “Dogs,” Mies says. Blame bats for only one to two cases per year.

His efforts have hit prime time, too. From Conan O’Brien to The Ellen DeGeneres Show, the dynamic Mies has brought his little buddies to the masses.

One of his biggest triumphs was persuading Denis Leary – who’s terrified of bats – to join him on stage for The Tonight Show. “So are a lot of other Americans,” reasoned Mies, who literally popped into the actor’s dressing room.

Mies says he just fell into his role as TV personality. “I was pretty surprised at how much I liked it, how good I was – and how people reacted to my presentation.”

As for his tweens, the Bat Zone residents are practically family pets. “They’ve been growing up with bats around them for years,” says Mies. The younger ones, 8 and 9, handle smaller fruit bats; Georgia, 11, works with just about all of them. “She’s developed relationships and trust with these animals,” Mies says.

Wife Eva Meade is on-board, too. In fact, mom and dad are currently designing a children’s alphabet book about bats, due out in spring. The couple, who met at their kids’ school and swapped vows at Cranbrook two years ago, were drawn together in part by their love of animals. They’re both 20-plus year vegetarians, to boot.

While the wedding was bat-free, Mies admits, his blended family sees tons around their backyard bat house – and the nearby lights on 14 Mile and Telegraph roads.

For his organization, Mies envisions a future biodome: a multisensory place that immerses visitors into a true bat cave environment.

And on the home front, he just might become Dracula after all.

See, Mies is usually on the road during Halloween. But this year, since the holiday falls on a Monday, he may make it back in time.

“The kids are planning the costumes,” he says. “Either bats – or vampires!”