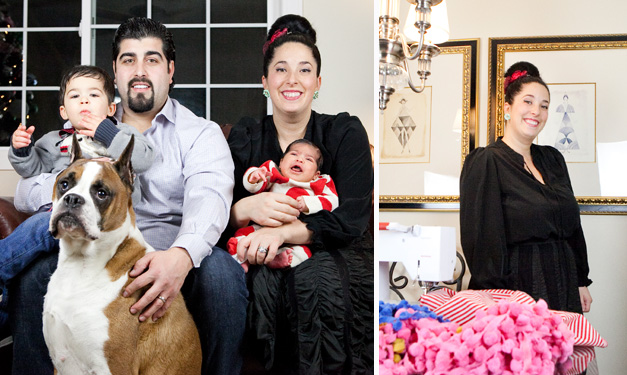 When the lights go out at bedtime for the little ones in the Loukas household, the creative engines are just turning on for local mom Rose Marie Loukas.

The 30-year-old seamstress from St. Clair Shores is co-owner of Detroit Dollface, an independent line of eclectic clothing and jewelry that Loukas started with her sister Angie Tedesco in 2002.

Selling a mix of handmade garments with a retro flair and vintage pieces updated with modern embellishments, the ladies of Detroit Dollface love to make a statement with their designs. And they’re enjoying success on Etsy and at local art fairs like Detroit’s Dally in the Alley and Ferndale’s DIY Street Fair.

When Loukas became a mother with the birth of son Dino nearly two years ago, the sisters kept cranking out their throwback wares – but settled into a new routine of working about 7-11 p.m. while Dino was sleeping.

“I’d lay him down and we’d go in my basement and sew,” says Loukas. They also often get crafty at Tedesco’s kitchen table. But working when the little “wild man” is awake? “It’s just impossible, because he wants to like tear apart my serger,” Loukas laughs.

Rosie and husband Eddie welcomed baby Ida Marie into the family about two months ago, and a new normal is still in the works.

“It’s kind of like a new balance now. I had it under control once I had my son. I have to kind of start over again figuring out when I can do it,” she says. “That’s really the trick.”

“She’s brought me some creativity back,” said Loukas, who was taking a short break from most of her sewing duties after her daughter’s birth. “I’m anxious to sew again. She’s kind of inspired me.”

With antique collectors as parents, it’s not surprising Loukas and Tedesco became experts at scouring flea markets and estate sales growing up. Now they take their vintage finds and give each piece their own personal touch with new ribbon, buttons or other adjustments to “bring them back to life,” as Loukas describes it.

Their love for vintage has also inspired their own designs, with popular dresses and skirts featuring polka dots, circus animal prints or other funky fabrics for a modern twist on a classic silhouette.

“I think that time spent at those places has helped shape our eclectic mix of inspiration,” says Tedesco, 27, who has a bachelor’s of arts in fashion design and merchandising. She takes the lead on jewelry making for Detroit Dollface and handles shipping orders all around the world (they recently sent one to a customer in Russia).

Tedesco, of Clinton Township, describes the duo’s style as “an eclectic mix of everything of 1940s/1950s retro, classic punk and traditional folk.

“Our clothing is definitely a reflection of our own personal style,” she adds.

Loukas similarly earned a bachelor’s in fashion design and merchandising from Wayne State University and previously worked as a costumer for the Detroit Opera House – a job she describes as “sewing boot camp.” She says the opportunity fell in her lap after she got to know the costume director while working at Haberman Fabrics in Royal Oak.

“Honestly, that was the best sewing experience that I could have ever had,” Loukas says of her time at the DOH.

The sisters both began making their own clothing because they could never find what they wanted (or at the right prices) in stores.

“It just basically became a business where we like it and we might as well make money while doing it,” Loukas says.

The two agree that working together is easy since they share so much in common.

“We both knew from a very young age that we wanted to be designers, so it was natural for us to collaborate,” Tedesco says. “Creating this business has been such a positive part of my life, and being able to share it with my sister just makes it all the more worthwhile.”

As she works to get into her routine as a new mom of two under 2, there’s one more project Loukas has been inspired to begin – a baptismal gown for baby Ida.

“With a girl, dressing her and everything is so cute, you just want to get back into that creative mode,” she says.

She hopes to pass her sewing skills on to her daughter. “I hope (Ida) wants to do it one day,” she said. “I hope she’ll at least want to learn.”