When Safety’s NOT in Numbers: Teaching Kids to Be Aware in Large Crowds

A local expert explains what kids should be taught about safety in large crowds and at public events. 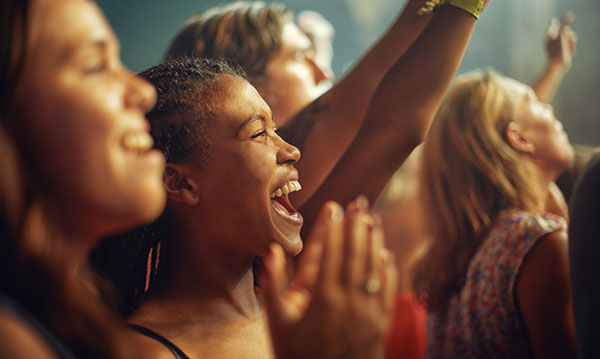 For many parents, news reports of human or sex trafficking, terrorist incidents and shootings can induce a near-constant state of worry.

While the actual risk of being involved in a dangerous situation may be low, it doesn’t stop the feeling of vulnerability while out and about with your family at crowded events. So how can you keep your kids safe?

In addition to the things you do every day with your child’s safety in mind, there are some extra precautions you can take as a family and teach your kids about safety in large crowds, says Michigan State Police Lt. Michael Shaw. It starts with a conversation at home.

“The first thing we always tell parents is you can’t be afraid to actually talk about it,” he says, pointing out parents’ natural inclination to keep kids from finding out about serious incidents in the news. “There’s violent crime out there. We try to shield our children the best that we can.”

But children are likely to find out eventually, so it’s better to have information about incidents – and the subsequent conversations about staying safe – come from a parent.

“I think it’s important for kids to hear from their parents what’s going on,” Shaw says. “There’s a lot of stuff that’s out there that kids are exposed to, be it the nightly news or media channels or their friends, and sometimes they just need to hear it from mom and dad that they’re OK.”

Kids who are old enough to understand should be taught to “run, hide and fight.”

“Run, hide and fight is one of the biggest things that we talk about in active shooter situations,” Shaw explains. “You can’t be afraid if something happens … to run. If people tell you not to run, or people won’t run with you, then you’ve got to make that decision to run on your own.”

If running isn’t possible, the next step is to hide.

“If you can’t run and there’s no clear path for you to get away from the incident … hide is the best thing you can do next,” Shaw says. “Hide under a desk, in a closet, make sure your cell phone is not on ring (since it can call attention to your location).”

The last part of the recommendation is to “fight” if needed.

“If worst comes to worst, it’s you and a bunch of other kids and a couple of adults and that person is coming in, it’s fight. It’s fight for your life,” Shaw emphasizes. “Nothing is off limits as far as using weapons, fire extinguishers, desks, you name it. This is about trying to survive that situation.”

It’s the same advice that adults are taught, he says. If you’re not sure whether your child is ready for the information, consider their maturity level – but also keep in mind that many kids are now being taught about it in school.

“If you’re in a situation where you’re leaving your child in school, this is something that kids are starting to learn as soon as they get into the public school system, unfortunately,” Shaw says. “They may get that even before mom or dad get the opportunity to talk about that.”

When kids go out on their own

Any child who’s old enough to attend an event on their own or with friends should know about “run, hide and fight.”

“If they’re in a situation where they’re going in to a public event where mom and dad aren’t going to be there, then that’s something that you need to kind of think about in the back of your mind,” Shaw notes.

And from an early age, kids should know that law enforcement officers are safe people to seek out if you need help.

“Don’t be afraid, especially the younger kids, to make contact with the police,” he says, pointing out that sometimes parents use police as a threat by telling their kids things like, “If you don’t eat your vegetables, that guy is going to come and take you away.” Then, “when they are in trouble it makes it less likely for them to contact law enforcement,” Shaw says.

If you’re headed to a festival or other busy event with your family, make sure your kids know what to do if they get separated from you. In addition to teaching them about safe people to ask for help, consider setting a meeting place.

“If something should happen or we get separated, this is where we’re all going to meet,” Shaw explains.

And stay in touch, he adds.

“Older folks have a tendency to turn their cell phones off when they don’t use them. Make sure if you’re going into an event like that, that you have your cell phone on all the time,” Shaw says. And if your child has a cell phone, as many do, “that’s another good way to track where your kids are.”

While frightening news reports can make some parents want to stay home or restrict their kids’ activities, Shaw recommends that parents keep it in perspective while taking important precautions.

Consider the countless sporting events, concerts and festivals the city of Detroit has hosted in recent weekends alone, Shaw points out. “Nothing happened,” he says, adding that law enforcement is continually working to make these venues even safer.

So while there may be people who target certain types of events, “Is it worth sitting in your house … putting plywood on your windows? It’s just not worth it.”

“Just be cautious,” Shaw recommends. “The chances of you being caught up in one of these events are pretty slim. We don’t want parents or adults to be afraid to go do anything. Just be cautious and trust your gut is usually what I tell them. It’s what I’ve told my kids growing up.”