That's compared to heterosexual dads, the new study finds. The same goes for moms across the board – whether in same or opposite sex relationships. 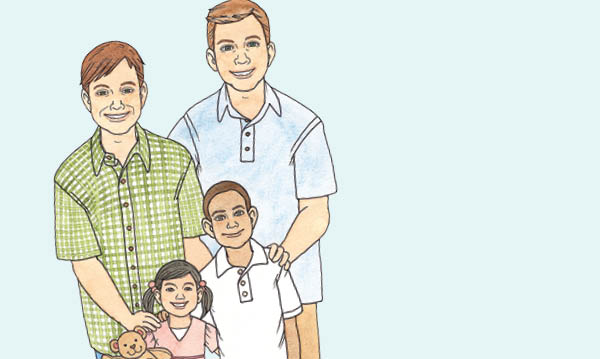 What could you and your child do in 53 minutes? Maybe play a game, make dinner together, read a few stories aloud or build a Lego structure?

Those 53 minutes, a new study says, are how much more time same-sex dads spend with their kids each day versus dads in heterosexual relationships.

The study, published in Demography, contributes to the conversation about whether gay parents provide a different child-rearing environment, says co-author Kate Prickett, a Ph.D. candidate at University of Texas at Austin. The study’s findings put same-sex moms and dads at the top of the list when it comes to time spent with their kids. In fact, same-sex moms spent 111 minutes with their children per day, dads in same-sex relationships about 104 and moms in opposite-sex unions 99. Dads in opposite-sex relationships, meanwhile, checked in at just 51.

“For gay parents, it’s great to have science support the passion we put into our kids,” says Roland Leggett of Detroit, dad to daughters Makyla, age 11, and Makeil, 6. Leggett, who’s also state program director for Working America, and his husband, Matthew Bode, a Lutheran pastor in Detroit, adopted their daughters out of the foster care system. “They were wanted,” he says, and “that’s certainly led itself to the way we parent them.”

Kathleen LaTosch of Ferndale, a fellow same-sex parent, agrees. The process takes a lot of planning, time and money. “Because of that, I think (with) parents who are trying so hard to have children, there might be a different interest in more spending time with the kids.”

It’s one thing to be in the same room with your kids, but the researchers wanted to focus on quality, child-focused interactions. So they analyzed data from the 2003-2013 American Time Use Survey, in which people fill out a 24-hour time diary.

“We wanted to try and capture time that would matter for children’s cognitive development,” says Prickett – bath time and reading stories, for example, and not housework and stuff that doesn’t involve directly engaging with the child.

This isn’t the only study that’s pinpointed a lapse in dad-kid quality time. Another from Great Britain this year found “only 25 percent of fathers between the ages of 15 and 24 read to their child every day compared to 61 percent of mothers of the same age,” national nonprofit Book Trust notes on its website.

While dads can get a bad rap, Prickett notes that men overall are still spending more time with their kids than years past.

Leggett feels these studies are a great way to open up dialogue about same-sex parenting both in and outside the gay community. Still, there are misconceptions.

Leggett says he and his husband have encountered people who have questioned their ability to raise daughters. “There were some folks that were like, ‘What are you going to do about hair?’ Or, ‘How are you going to have a conversation with your daughter about her period?'”

On the flip side are moms like LaTosch, who has two 9-year-old boys and is a diversity and inclusion consultant. “One thing that I hear a lot is, ‘How are you providing a male role model for children?'” she says. “Do our children miss not having a dad? Yes, I think they do. And we talk about that with our kids,” she adds. “Just because we have two moms in the family doesn’t mean we don’t have male role models.”

Both families report that they’re thriving. And, as the study underscores, spending child-focused, quality time with your kids is key.

“Being a parent puts you in a really vulnerable space and opens you up to scrutiny,” Leggett says. “At the end of the day, it’s really no one’s business how I parent my daughters or the way my husband and I choose to raise our daughters.”