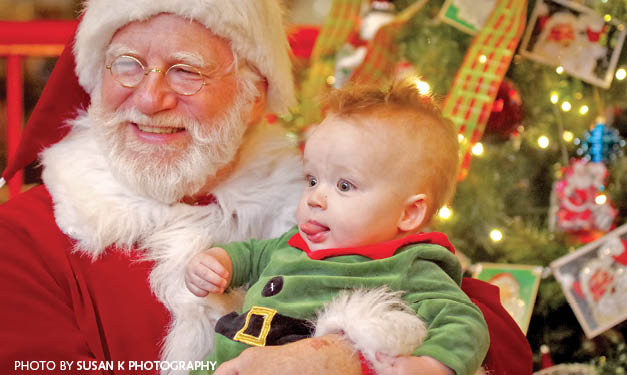 There’s more to the merry icon than the beard and red suit. Santa is all about the Christmas spirit, and he’s part of just about everyone’s holiday memories. So what’s it like to take a walk in the big man’s boots? We got the jolly low-down from Joe Eadie, the annual Mr. Claus at Kerrytown Market & Shops in Ann Arbor.

Can you spot him?

Look for a real white beard, antique bifocals and belt with a stag on the buckle – and warm twinkle in his eye. That’s Eadie. He’s been Santa for a decade now. “It’s sort of a one-man show – and yet it’s not a show,” he says. “When the suit goes on, Joe the man goes away and I become something very special.”

This father of two (ages 26 and 40) has lived in the Tree Town area practically his entire life and been married to the same “Mrs. Claus” for 40 years. In the off-season, he’s a sales rep for a local machine-making company.

His big debut was at a family gathering 20 years ago, at his sister-in-law’s request. “It was almost the last time I played Santa.” His eldest niece recognized Uncle Joe under the costume and told her mom. Eadie felt terrible. “I thought I had ruined part of her childhood!” Luckily, a decade later, he tried again, to better success.

Tips from the trenches

Still, “Santa can be scary sometimes.” That’s OK. Eadie is happy to squat down to floor level to make kids comfortable. Parents can help, too, by introducing tykes. “It breaks down the barrier, and then Santa knows their name,” he says. But never force it. He suggests mom or dad step up and talk to Santa. That warms kids up, too.

What’s on those wish lists?

Legos are always a hot ticket – plus books and art supplies. But every now and then, Eadie gets a request that really sticks. Like a child who wanted a sewing machine so he could make clothes for his mom. “That’s when you wish you could hop in a sleigh and bring him that sewing machine,” he says. Eadie never makes promises, but tells kids some things are beyond Santa’s power and he will pray.

Yes, there’s a class for that. Eadie just graduated from the St. Nicholas Institute in Livonia this October. It’s sort of a combination school and retreat, he says.

“It’s more than playing. It’s being,” Eadie says. And to him, it’s about being a kid and bringing joy. “We don’t get a chance to express the child within us very often. Being Santa is an opportunity to be a part of something more than yourself.”

Visit the Michigan Association of Professional Santas website to see what’s up for Eadie and his fellow helpers.