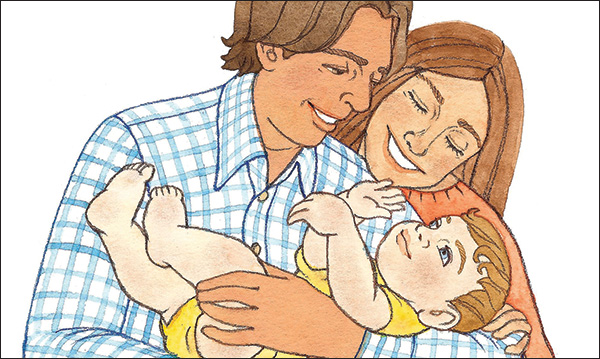 Next time you’re feeling stressed or overwhelmed with your child, take a note from Otis Redding and remember: “Try a little tenderness.”

Why? A parent’s positive involvement and nurturing actually reflects on a child’s relationships – socially and romantically – as well as academics in the future, notes a new University of Delaware study. In fact, it found sensitive caregiving in the first three years of life impacts a child all the way to adulthood.

“Our early attachment to caregivers sets the stage for our emotional and social development,” says Hauser, who’s also director of behavioral science and research at St. John Hospital.

“Sensitive” parents tend to be attuned to and responsive their child’s needs, which gives them a sense of security, Hauser adds. “When we feel this sense of safety and security, we are better equipped to go out into the world and explore, learn and make friends – as we have a secure home base to return to.”

It seems simple, yet it’s not always easy to stay sensitive when life gets crazy. How can parents strike a balance?

For their data, researchers looked at 234 children – all the way from birth to age 32. It actually was part of a bigger long-term study that began in the 1970s. These children had the additional challenge of being born into poverty, says study leader Lee Raby, a University of Delaware postdoctoral researcher.

“Many of these participants, over half of them, were not married at the time of the child’s birth,” Raby says, so researchers saw mostly mother-child interactions. Early on, they observed children being fed by their caregiver and playing with their toys at home. Then, at 2 to 3 years, they were brought into the lab to complete tasks, Raby says, to give researchers a peek at how parents supported them. And for ages 5-18, researchers went to schools, and participants’ teachers completed a measure of how well kids were doing in their peer group.

“Higher scores reflected that they were comfortable with their peers, well liked (and) able to form close friendships,” explains Raby.

Finally, in adulthood, researchers assessed social functioning by conducting interviews with the participants. Are they dating? Are they loyal? Are they in non-violent relationships? These are some things researchers wanted to examine.

Overall? The findings definitely showed a correlation between early caregiving and success – academically and socially – in adulthood.

“That measure of early caregiving not only predicted the children’s success with peers,” Raby says, “but it was also predicting educational attainment and functioning in romantic relationships in their 20s and 30s.”

Whatever the socioeconomic situation, there are three common ways parents struggle, Raby says: hostility, intrusiveness and involvement. When you’re feeding a child, for example, and the child is not cooperating, you get angry, expressing frustration. As for intrusiveness: “The parent essentially is controlling the interaction by not allowing the child in any way to move away from structure.”

And, when it comes to involvement, parents act more aloof than engaged. Raby uses feedings as an example again, noting that parents don’t show engagement in what their child is doing. Simply spooning food into baby’s mouth isn’t cutting it.

To be a more sensitive parent, let go a bit – and let your child lead the way. Think about building kids’ emotional vocabulary, too, Hauser says. Teaching kids to say words like “sad” and “jealous” is just as valuable as teaching “book” and “cup.”

“In doing this,” she explains, “parents are helping their children know that their feelings are valid and worth addressing.”

While Hauser agrees sensitive parenting is a great practice, it’s important to strike a balance and not tip into “over-indulgent or permissive parenting,” she says, “where a child’s every whim is catered to, there is little to no discipline and the child starts to run the household, dictating schedules, behaviors and activities.”