Shaka Senghor Goes From a Tough Past to a Bright Future 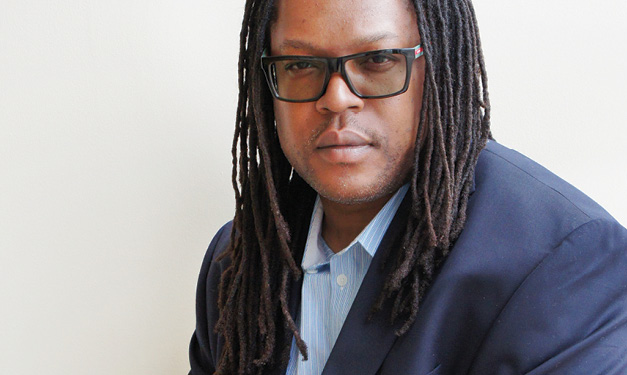 A black inner-city kid with the deck stacked against him, he ran away from an abusive home, dropped out of school and started to deal drugs. At age 17, he was shot three times during gang violence. At 19, he took the gun in his own hand, committed murder and was sent to prison.

Barely an adult, his life seemed over. But here’s where White is different.

“I took that time to work through the baggage from my past,” he says.

Along the way he adopted a new name – Shaka Senghor – to personify his new identity and a fresh start.

“Gun violence for kids isn’t born in a vacuum. It’s the things that happen. All these different things that add up to the bigger picture.”

The bigger picture was a large sense of abandonment, Senghor explains. He says he felt forgotten and that neither his parents nor teachers cared. “I felt like the signs were there,” says Senghor, who went from an honor roll student to dropping out of high school.

After serving 19 years in prison, Senghor, 41, found a new purpose in reaching out as a mentor for kids and young adults who may be secretly battling his past struggles.

“My goal is to make sure we don’t lose any more of our children unnecessarily to prison and street culture when we don’t have to,” he says, adding that he wants to reach young adults who have already started down a rocky road. “I am really passionate about it because I know what it’s like to be that kid where you feel like no one cares about you enough to pull you out of that (destructive) environment.”

For more on Shaka Senghor, his story and mission, visit his website.

Senghor has been a featured guest on TEDxMidwest – an offshoot of TED (technology, entertainment, design) talks, the global online streaming conference series – where he shared his mentoring goals and memoir, Writing My Wrongs.

“Our kids need what I have to offer. Our kids need it without a doubt. It’s not a matter of ego. It’s just this is my reality,” Senghor says. “We have kids that are living in strained environments of violence and dysfunction.”

He stresses, “We have very few people who can reach them on that level because they either don’t have the experience or they don’t have the ability to connect with kids in a very honest way who come from that environment.”

Senghor also wants to help men and women re-enter society from a prison environment and make amends through his Atonement Project – an initiative that aims to establish a dialogue with victims of violent crimes and communities about re-entry programs for former inmates.

“Part of that is atonement with oneself,” he explains.

This year, Senghor started co-teaching a Prison Creative Arts Project at the University of Michigan. The course sends undergrads to prisons for art workshops focused on apology and atonement to help prisoners prepare for re-entry.

Although Senghor is a motivational speaker and uses his story to break through to at-risk youth, he still faces his own problems of re-entry. On occasion, he explains, he is denied the opportunity to talk to local classrooms because of the severity of his crime.

“I just was so (upset) about that because I know what these kids are going through in a way that not many people know,” says Senghor, who has three kids who grew up without him while he served his prison time.

As a former inmate and absent parent, he is fully aware of the struggle to re-enter society and your children’s lives.

“My children were young adults when I was released from prison, so for me it was more about establishing mutual respect as opposed to authority,” says Senghor.

“There have been a few hurdles dealing with my oldest son who is struggling with drug addiction and the legal system. Communicating with young adults is a lot different from dealing with younger kids growing and evolving,” which is why Senghor emphasizes helping children address their issues at an early age.

“I don’t think the past should be forgotten. However, it should be forgiven, so that we can grow into a healthier relationship. I don’t know what the future holds for my older children and I, but I am hopeful that the relationships can be healed. But there is no guarantee – and I have come to terms with that.”

And he hopes that other families in his situation will as well.

Getting Re-Connected With Your Kids

There are many reasons parents have periods of time away from their kids. Maybe it’s simple geography, and you live in different cities. Perhaps it’s something more profound, as in the case of Shaka Senghor, who was in prison for almost 20 years. Whatever the reason, you may be looking to reignite a connection with your child. How do you get your kid to start viewing you as a parental figure again? Below, Senghor shares some personal advice from his struggles as an absent parent.

The need to rid yourself of emotional baggage may be strong, but consider that your child may not be ready. “I think the most important thing we should consider is the fragile emotional nature of a child who may have some abandonment issues and built-up resentment.”

“I would recommend that parents take their time reintroducing themselves as an authority figure. Take time to get to know your children’s personality and what their lives were like while you were away. I think this approach will allow for the natural growth of the parent-child relationship.”

“If they are older teenagers or young adults, you have to give them their space and make sure they are aware that you are available for them when they are ready. We can’t force a relationship if they are unwilling to resolve the baggage from the past. If the children are younger, I recommend taking it day by day. Spend time in spaces they enjoy, so it takes the pressure off and relieves some of the tension. And always remember that space and time helps with healing.”

“When attempting to reconnect with your child, you should not depend on them for your emotional needs. Surround yourself with a good support network who understands and will be there to encourage you on those rough days.”