Individual attention and quick conflict resolution are key to eliminating issues. Read up on several other handy tips on sibling rivalry. 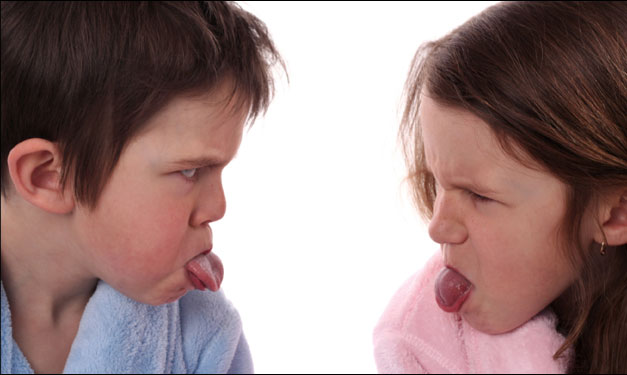 One would expect a home with three young boys to be riddled with conflict and sibling rivalry – but that’s not the case with the Michaels kids.

“I just don’t see a lot of it,” says mom Jen of her 3 sons Tyler, J.D. and Johnny. “What I do see is a lot of friendship – maybe because the older boys are so close in age.”

Michaels works out of the house and says that husband Greg does a lot to keep things balanced in their South Lyon home.

“There may be some pouting that goes on from time to time, but I don’t see a lot of competition,” Michaels says.

There are times when Jen sees a conflict brewing, but she heads off larger problems by talking things out with the boys.

“I think I take a rational, realistic approach to (conflicts),” she says. She examines the problem with the child and is very frank. “I’m very honest with them. I don’t try to sugar-coat it.”

She recalls when one brother was upset because the other was ahead in sales for a fundraising event. That’s when she pointed out that the boy having more success is more outgoing while the other is more reserved. “He likes talking to people,” she observed, and added that that makes it easier for him to approach people – which explained his success with the fundraising.

“I just sit down and talk to them,” Jen says. “I go to the kid who is being bothered by it first and find out what the problem is.” During their talk, she’ll remind him that everyone has his strengths and we are all good at something.

Once that is complete, “I’ll go to the superior brother and ask him to tone things down. I’d tell him we don’t gloat about our successes. You need to be humble about it and always want to look at how you got there,” she says, adding that others almost always contribute to his successes.

This is a good age, too, to teach children a few conflict resolution skills. Getting to the heart of a matter is not always an easy thing.

“As kids get older, the issues are about belonging and who gets to do what,” Windell says. “You need to teach them good conflict resolution skills.”

For instance, siblings may be at odds over which video game to play or which restaurant they want the family to go to. “Parents need to mediate those conflicts so they get solved in ways that represent compromises and resolution,” Windell says.

Jen says that although she treats them as individuals, there is always a concept of the family being a team – “Team Michaels.”

It works wonders in getting everyone in the family to work together. Faced with a particularly rough week, Jen wrote a note to the team and posted it.

“I need everyone in their playing positions,” she wrote. “You’re a team, and you’re always proud of your team. You need to realize how important you are and that everyone has something to give to the team.”

After that spirited message, she asked them to be particularly attentive to their responsibilities that week, such as packing and unpacking backpacks and doing their assigned chores. It worked like a charm.

A few additional quick tips? Take time for each child, acknowledge conflicts and get to get to the heart of the matter, and teach children how to resolve conflicts.

While Team Michaels is a great concept, the children also need individual time and they get on a daily basis.

“That’s something I work very hard to give,” Jen says. “I make sure they all get one-on-one time, so they have a chance to say things.”

Every night, there is snuggle time with each boy: “We read a book, and it’s just the two of us snuggling.” Even if it’s only for three minutes, it’s an opportunity the boys know they can expect.

Michaels doesn’t claim to have all the answers, but she has a lot of them – thanks to her attention to each of her children and her quick response to conflicts.

“It’s been pretty easy so far.”