Kid suddenly talking in a British accent? It's just one symptom of this common kid 'malady.' Here, find out if your kiddo's a YouTube addict. 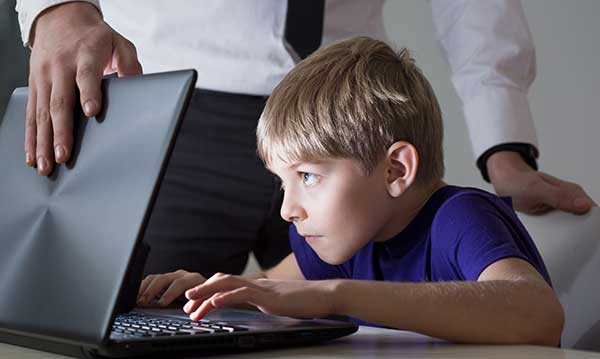 The clues you might have a little YouTube Addict in your house can start with seemingly innocent conversation. Like, “Do you have your own YouTube channel?” Or, perhaps, “How many subscribers do you have?”

These are some of the questions I overheard while driving my then-7-year-old and a few of her friends around town during the summer. They were talking about the popular video sharing site – and not just their favorite funny videos to watch, either.

They wanted to know who had their own channels (two of them did), how many viewers and subscribers they each had, what kind of videos they’d made and on and on.

I realized then just how consumed today’s kids really are with the video sharing site. It’s not enough just to watch the addicting videos; kids want to be part of it – and maybe even start a YouTube channel and have a chance at the stardom so many people have achieved.

We’re raising the YouTube generation, it seems, and those of us in the MTV generation better be paying attention. It’s easy for kids to get hooked on the app and its binge-worthy shows – and just as easy for parents to forget about keeping up with key parental controls (Remember how “you can’t do that on television?” You can probably do it on YouTube).

One study even found YouTube is kids’ most-loved brand. So stay aware, parents – and consider these six (and mostly light-hearted) “signs” your kid might be a YouTube addict.

1. Your kid is pretty quiet lately

What’s that? No bickering and sibling quarrels? It could be because your kids are holed up in their rooms watching endless toy reviews or video game walkthroughs. Ready for your home’s noise level to return to normal? Just say the magic words “Screen time is up!” – and then prepare for some whining and unrest.

Is your kid asking for some toy you’ve never heard of? Suddenly she’s interested in collecting vintage dolls or Furbies or filling the bathtub with a zillion Orbeez? You can probably thank YouTube for that. Commercials and YouTube ads don’t seem to be what’s influencing the gift wishlists among most kids I know. Instead, it’s the actual content on YouTube that has them wanting everything

Between toy unboxing videos and genre-specific collectors, your kids can easily get sucked into wanting not just the items but also the volume of stuff they see their favorite YouTubers digging into with each new video.

3. Your kid wants to record every part of his or her day

Have you become an amatuer videographer for your hopeful YouTube star? Maybe you’ve even amassed a small collection of AV equipment for “holidays and vacations” (but really, for your kid’s channel)? It’s a sure sign that your kid’s YouTube hobby is getting into dangerous territory.

4. Your kid is using a British accent

Why is it that so many famous YouTubers are from the UK? Whatever the case, if your kid starts sounding a bit British in his pronunciations, it might be because he’s spent too many hours listening to popular Minecrafters like DanTDM and Stampy or product reviewers like Toys AndMe.

5. Your kids argue about whose fave YouTuber is better

The only time YouTube doesn’t equal some moments of quiet sibling peace? When your kids start arguing about whose favorite YouTube channel is better. (“I bet DisneyCarToys doesn’t even have a million subscribers!” is a taunt that’s actually been used in my house.) Oh, and one other time: When they’re fighting over the TV, iPad or other YouTube-viewing device.

6. Your kids know things you didn’t teach them

Did your 5-year-old just explain to you the origins of the universe, what Saturn’s rings are made of, or that cashews grow on apples? You could have YouTube to thank for that, too – but this time, in a good way.

It’s the site can be full of potential problems – and it’s important to make YouTube safe for kids. But with proper monitoring, it can also be a great source of educational content. So if you do have a little “YouTube addict” on your hands, hope for positive side effects like this one.

Is your kid a YouTube addict? How can you tell – and how do you break the habit? Tell us in the comments!