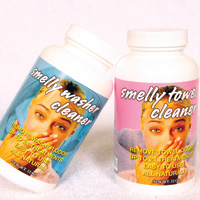 Mold and fungus are two things you don’t want lurking in your family’s laundry. But let’s face it: Clothes, towels and even the washing machine itself inevitably collect this icky stuff.

Fortunately, two new products – Smelly Towel and Smelly Washer – have their sites set on ridding your laundry of these nasty health problems once and for all. They’re non-toxic and environmentally friendly, to boot. Sounded like a good deal, so we took them for a spin.

Let’s start with the first creation: Smelly Washer. Invented by an appliance repairman, this product attacks the mold and odor found inside the machine. Think about it: If there’s mold in the machine, there’ll be mold on your clothes. One tablespoon added to a hot cycle brings the washer back to its original state.

Our office manager tested this product in her home. As a user of cloth diapers for her son, she is no stranger to a smelly washing machine and was happy to report that it worked great.

The next invention is Smelly Towel, which removes stink from towels, clothes and fabrics. Just a half-teaspoon with detergent is touted to obliterate odors.

I was in charge of testing this product. I’m known for leaving towels in the washing machine over night, causing them to get moldy and smelly. Sure enough, I once again did this – but, when I went to put the towels in the dryer, I was shocked to find that there wasn’t a hint of mold or mildew smell. It really did work!

A bit of caution: Straight out of the bottle, these products have a pretty strong industrial-cleaning smell, with a kick of sweetness. But once the cycle’s done, that sharp aroma definitely dissipates.

Both products can be purchased for $16.99 for a 12-ounce bottle at SmellyWasher.com or Ace Hardware. Happy washing!