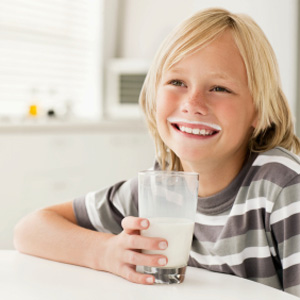 Should young kids ages 2 and up drink skim, 2 percent or whole milk?

It's a question that up to this point, parents following the American Academy of Pediatrics' recommendations would answer with low-fat milk, according to a Time magazine article. However, a recent study may indicate a need for re-evaluation.

Researchers at the University of Virginia conducted a study looking at milk type and the weight of preschoolers. The research, published this month in the Archives of Disease in Childhood, was an analysis of a database of 10,700 children in a "longitudinal birth cohort study" – meaning, basically, that researchers delved into details about kids with similar characteristics, within a defined period of time.

The results revealed skim milk drinkers actually gained more weight between the ages of 2 and 4. The preschoolers who drank whole milk and 2 percent milk, however, had lower body mass indexes, or BMI – despite the higher fat content of the milk.

In an NPR report, Dr. Mark DeBoer, the study's co-author, speculates that the higher fat content may cause kids to feel fuller, meaning they might forego other high-calorie foods.

However, Dr. Linda Van Horn, a professor of preventive medicine for the Northwestern University Comprehensive Center on Obesity, remains skeptical, according to Time magazine. She cautions that the study "was not directly observed," but dependent on parents' observations, which are not always accurate.

Julie Koning, a registered dietitian at Customized Health Solutions, LLC in Royal Oak, finds the study interesting. She personally feels that whole milk provides many benefits to the body.

"I think that it would be fine for kids to drink whole fat – as long as it's in limits of their daily calories," Koning says.

In her experience counseling families with kids under the age of 5, she's observed that eating too much sugar-laden, processed food is more often the problem – not milk.

Koning points out that fruits and vegetables are more expensive than high-fat treats. In fact, there are studies indicating a relationship between affluence and childhood obesity rates.

One such study out of Rice University in Houston by researchers Rachel Tolbert Kimbro and Justin Denney found that children living in lower-income neighborhoods had a 28 percent higher chance of becoming obese. Middle-class children had only a 17 percent chance of a sky-high BMI.

However, Carolyn Jennings, a local registered dietitian and certified diabetes expert, is concerned about the effects of the saturated fat in whole or even 2 percent milk.

Jennings, from the Southeast Michigan Diabetes Outreach Network, sees children starting school at age 5 with high blood pressure and cholesterol. Both conditions can be traced to diets high in saturated fats, such as ones with full-fat dairy products.

But ultimately, both experts agree sugar, not milk, probably remains at the root of weight gain in kids.

When going on your next road trip, why not rent a RV?
Read more
Sponsored Content