A recent survey found that one in five grandparents don't like their grandchild's name. Find out what their issue is and which baby names cause the fights. 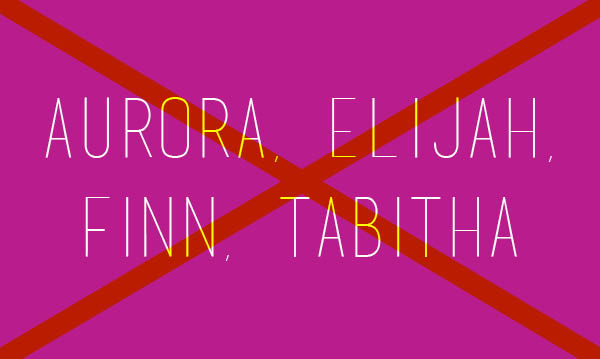 When Jill Jones*, a mom of 2 from Shelby Township, first became a mom she probably didn’t think that baby names would tear a rift between her and her own mom, but it did.

“My mother hated my oldest daughter’s name,” she explains. “[She] was offended that we gave her the middle name ‘Charlotte’ after my mother-in-law.”

‘Anita,’ the middle name that she chose for her second daughter, after the child’s paternal great grandma, didn’t fair too well with maternal grandma, either.

A recent survey by sister sites Gransnet and Mumsnet of 2,000 grandparents and parents found that one in five grandparents hate, or have hated, their grandchild’s name.

Of those surveyed, 69 percent of grandparents felt that it was fine for them to give their opinion on their grandchild’s name, while just 38 percent said that it was none of their business.

Two percent of the grandparents that disliked their grandchild’s name fell out with the parents over it and 6 percent actually got sick over it – which seems pretty crazy. But there may be a solid reason why parents and grandparents are butting heads over it.

Back in 2016, a study published in the journal of Applied Social Psychology found that millennials have been choosing more unique baby names.

Funny enough, the top three reasons for grandparent objection to the names were all subjective: the names were too ugly (28 percent), too weird (17 percent) or too old-fashioned (11 percent), with Aurora, Charlotte, Elijah, Finn, Jack, Lindsay, Noah, Sally and Tabitha causing the most strife.

Luckily, some 39 percent of those surveyed did eventually come to terms with the child’s name, but unfortunately, some didn’t.

Seventeen percent still avoid mentioning the hated name to other people, another 17 percent admit to using the name reluctantly and 6 percent avoid using the name altogether.

As for Jill, “There’s still a very bitter grudge.”