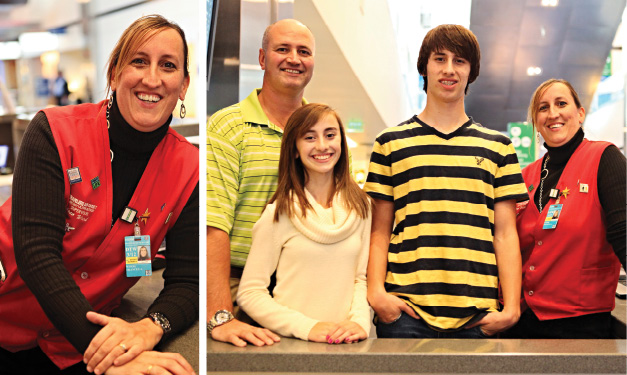 “Joe was so pleasant, nice and helpful.”

These aren’t your typical airport-related thank-you notes. Who’s gushing? A woman who couldn’t find her husband. A traveler who lost his cell phone. And the one that really stuck with Fran Wood: An exhausted, confused U.S. Army sergeant just trying to get home for his mom’s funeral.

Each one of them got help from a smiling person in a red vest. That’s Wood’s crew: volunteers for the Travelers Aid Society of Metropolitan Detroit, visit as part of its Airport Ambassador Program.

“Nobody knows we’re here,” Wood says. That is, till the stress hits the fan. Then her friendly force shines, stepping in and giving assistance.

“All of a sudden, boom! You’re getting this great big bear hug and kisses on the cheek,” she says. “I just giggle. That’s something no one will experience in any other job.”

And her job as TAS’s volunteer director is simple: “We’re a helping hand along the way. We try to relieve some of that tension and show customers it’ll be OK.”

That Samaritan attitude comes easily to this New Boston mom of two – who zips around Detroit Metro Airport’s two terminals in her trusty Sketchers.

“I love my job,” she says. “I always thought it would be a neat little place to work at.” You may even say it’s a family affair: Wood’s hubby Mark works there too, in U.S. Customs. Her youngest, Rachel, has manned TAS booths during a couple of take-your kid-to-work days. And it’s a beloved starting (and finishing) point to family vacations.

“Travel can be pleasant,” Wood says. “We’re there to try to give that smile as you arrive, and hopefully we send you off on your way in a happy state.”

Really, it’s always been a small world to Wood – with open doors. It started with a multi-cultural stream of visitors to her childhood home in Hamtramck.

“Our house was kind of home base for everybody. My mom would cook meals for 40 people.” Four plates were for her own children, whom she raised solo: Wood’s dad died when she was just 7, and her mom, a Spanish native, took the reins.

“She barely spoke English,” Wood recalls. “She had all the odds stacked against her. But even though she didn’t have money, she made things work.”

Incredibly, that included two trips to Spain – Wood’s earliest air-travel memory. “Imagine four kids under the age of 10 traveling on a plane,” laughs Wood, who recalls her sister getting airsick all over her doll. “It was long. It was a doozy.”

Jet setting was never a staple, but Metro’s magic stuck with her. It wasn’t till 2009, though, that the employment gates opened. Wood spotted the posting on MichiganWorks.org.

By then, she’d logged 20-plus years in costumer service. But she wanted a closer commute to spend more time with her kids. Romulus fit the bill.

“It all just kind of seemed to be a perfect opportunity.” See, the 30-year-old TAS volunteer program had just lost funding, and its ranks had dwindled to 15. But that plucky group rallied, Wood says, and convinced the airport authority to keep it.

The catch? They needed a director who could recruit. Big time. Enter Wood.

“We’ve built it up to 60-plus today,” she says. You’ll find them at five booths (two in McNamara Terminal; three in North). Her goal is 150, but it’s tricky business.

“Usually if we can get their foot in the door, they’re pretty easy to keep,” Wood says. “It sells itself.” Many volunteers are retired, and she’s constantly hawking on websites like VolunteerMatch.org and Believe In Detroit or at local volunteer fairs.

Still, folks get sick, skip town. Or stuff pops up. Like the Spirit pilots’ strike in 2010. Overnight, she had to round-up 10 volunteers for 6 a.m. duty on a Saturday.

“It’s kind of a catch-22,” she says. “Managing that can be difficult.” At the same time, “They make my day … to see how passionate they are about what they do.

“They do not make a dime off it. We do not accept tips for anything.”

“The other thing is, we’re the eyes and ears of the airport,” she adds. Think your props or gripes fall on deaf ears? Nope. Early each month, Wood gathers all the recorded feedback from volunteers and merges it into a 25-plus-page report, which helps fix anything from wheelchair issues to unclear signage.

On rare occasions, Wood even spots Mark, who transferred to the airport a year ago. But you’re more likely to find the couple, who met on a blind date, chilling with the kids at their well-loved New Boston digs. Or hosting one of their popular parties, from Super Bowl to summer BBQs. With open doors, of course: “We consider our neighbors family.”

They built their home with that in mind. “It kinda flows so everybody is always interacting,” she says. “It’s very open. We aren’t segregated into groups.”

It’s what she’s trying to instill in her kids – and her volunteers. Whether that’s by lending someone a cell phone, or facilitating a family reunion at the baggage claim.

“You’re able to make that connection,” Wood says. “It really makes a difference.”

Like the time she helped reunite two scared, and very lost, elderly sisters.

“It was one of those situations where I got the big bear hug,” she smiles. “Another happy ending.”

The Travelers Aid Society of Metropolitan Detroit is always actively seeking volunteers to help at Detroit Metro Airport. Click the link to learn more, or call 313-962-6740.