Tattletale Kids: Why Kids Snitch and What Parents Can Do

Here's a look at what motivates tattletale kids, plus nine tips and ideas to help kids break the habit and build conflict resolution skills. 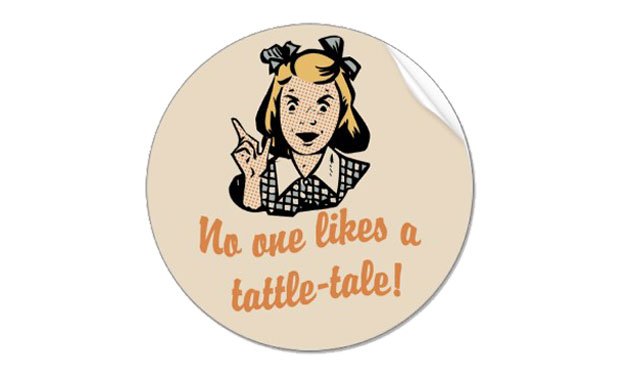 The tattletale kids phenomenon is common — especially among children ages 5 to 10. While parents want to keep an open line of communication, teaching kids to discern when to and not to tell can be complex and confusing.

But by second grade, inviting adults into social conflicts is clearly not cool. Perhaps because this is also the age, around 7 or 8, when a child has the ability to distinguish between what does and doesn’t need to be told.

“Kids who tattle get labeled – tattletale, squealer, snitch – and left out,” says Thompson. Bringing infractions to an adult’s attention sets your kid up for friendship failure.

Parents may assume kids tattle because they don’t feel empowered to stick up for themselves, says Fran Walfish, a child and adolescent psychotherapist in Beverly Hills, California. That’s not true.

“Kids tattle because they’ve developed a strong sense of right and wrong and they start policing other people,” says Walfish. Tattletales suffer from an overdose of conscience.

The most prominent reason is a developmental stage called “rule-governed behavior.” Somewhere around 5, kids begin to understand there are rules to be followed – but they don’t have the capacity to distinguish between major and minor rule-breaking. The result is that every broken rule is brought to an adult’s attention.

“Tattling at home may also be rooted in sibling rivalry,” says Walfish. An older child might feel he is held to a higher standard than his younger siblings, or that he is disciplined more severely. And he may be right.

“Parents need to take an honest look within,” says Walfish. “If you are harsh and judgmental with your children, they’ll act the same way with peers.”

It seems obvious: Giving attention to tattletale kids will only reward them for it. But experts say parents shouldn’t dismiss kids’ reports or tell them to “Get over it.” Sometimes, kids just want a safe place to share their concerns.

“Kids won’t say, ‘I need you to listen to this and be outraged on my behalf and then do absolutely nothing,'” says Thompson, “but 90 percent of the time that is what they want.”

Here are nine tips to help you with your little tattletale.

Look at what prompted the tattling. Is the child speaking up because he knows a rule has been broken but hasn’t developed the cognitive skills to understand when it’s important to and not to tell? Does he lack the social skills needed to resolve problems on his own?

Kids also may tattle if they feel something is unfair, to get another child in trouble, for attention or approval, or for deflection.

2. Brush aside, but don’t boot

When the child tattles, downplay it without completely dismissing it. Use this time to begin teaching him the difference between trivial and timely telling – another child breaking his crayon, for instance, versus another child playing with matches (danger).

Many kids under 8 don’t have the ability to determine what does and doesn’t need to be told, so guide the process. When your child comes to you with a story, listen, accept and acknowledge his feelings.

Then, ask, “Is someone going to get hurt? Is anyone crying?” If the answer is “no,” tell him he didn’t need to tell you that. He’ll begin to understand good and bad judgment calls.

You may need to coach your child on problem-solving skills. Tell him as long as people are working together peacefully and no one is in danger, they can work out solutions on their own. In this way, you equip your child to take charge of situations.

Tattletale kids who judge and blame are usually more focused on their peers’ behavior than their own. Kids need to learn how to present concerns to each other, not authority figures. Give each child a chance to without interruption or name-calling.

Then, ask “How could you work this out?” Listen to kids’ ideas. If they don’t have any, offer suggestions. Let kids choose how to proceed. “The resolution is not nearly as important as the process of working it out,” says Walfish.

Except in extreme circumstances — like when a child is intentionally hurt or belittled — don’t take sides or punish (whether it’s the tattler, or the other child the tattletale reported). “Play the role of supportive consultant, not hired gun,” says Thompson.

You’ll reinforce the tattler if you act on his info – and you could cut off communication if you yell at him.

Be present, nurturing and interested in what the child has to say. But if the tale isn’t of a crisis nature, minimize the response and, with time, it may subside.

It may help to arm yourself with kind, matter-of-fact phrases you can use in response, says Walfish. For example, say, “There are only two grownups in this house, and it’s our responsibility to enforce the rules.” Assuring “kid cops” that you are on the job may reduce their need to patrol and shift their attention back to their own activities.

Most tattletale kids outgrow the whole business as they mature. If not, social consequences such as being ostracized by peers or becoming a victim of tattling may cure unnecessary snitching for good.