Teaching Kids the Art of Conversation

Cursive is already on its way to being a relic of a bygone era before texts and emails. Will face-to-face discourse soon be a skill kids can't master? 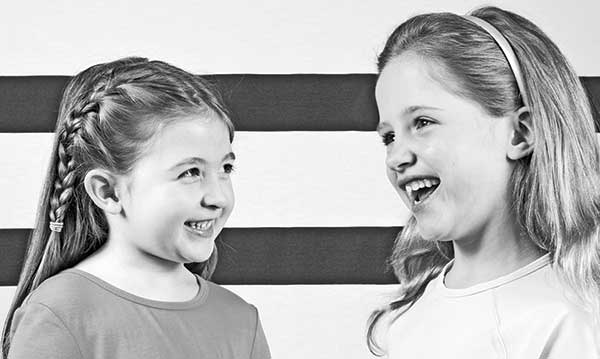 The sun was rising in pinks and oranges as we drove east along Eight Mile to turn south on Van Dyke. It was before 8 o’clock in the morning, and I was taking my youngest child to school. He attends Detroit Waldorf School, so we have a lot of time in the car. We could listen to the latest hits on the radio or we could have a conversation.

On this particular day, we were taking a new route to avoid the thick traffic on major thoroughfares and, in doing so, we ended up driving through a quiet long stretch of Detroit’s neglected neighborhoods: burned buildings, graffiti-decorated facades, empty meadows where buildings once stood, houses that have seen better days.

In the quiet of the morning, I asked my son what he thought as we drove past these sites.

“It makes me sad,” he said. And grateful, for the nice neighborhood where we live.

“Do you think there is anything we could do about this, since it’s part of our city?” I asked. And the conversation continued at a very high level of brainstorming between me and my 8-year-old. We came up with no great solutions, but the conversation itself gave me hope.

Most kids today, of any age, couldn’t have such a deep and thoughtful conversation. It’s not their fault, though. It’s the fault of all the technological distractions that are causing our entire society, especially those being raised in an era of quick-text communication, to lose conversational competence.

Kids spend hours every day engaging with others and with ideas via screens – smartphones, computers, tablets and TV. It’s not just relegated to the home. Many teachers “require” kids to have some form of technology at their fingertips for ready researching, to use as calculators or to find assignments on school blogs. This is true for my older kids, who attend public school.

In fact, teens send an average of 60 texts a day, according to a 2012 Pew Research Center study; for older girls the number hovers around 100. More than 60 percent of teens text daily with friends and family compared with 39 percent who speak to friends by phone and 35 percent who socialize face-to-face.

Sherry Turkle, author of Alone Together: Why We Expect More from Technology and Less from Each Other, wrote in a 2012 New York Times column entitled “The Flight from Conversation”: “Face-to-face conversation unfolds slowly. It teaches patience. When we communicate on our digital devices, we learn different habits – we start to expect faster answers. To get these, we ask one another simpler questions. We dumb down our conversations, even on the most important matters.”

In Joe Cornell Entertainment‘s 13-week sixth-grade dance program, there’s a strict no-phone policy, say Rebecca Schlussel and Steve Jasgur, the sister-brother team who own the Southfield company. “We force them to interact, to be present, to unplug,” they say, of the evening dance classes that teach boy-girl interaction and etiquette in a coming-of-age way.

“There’s a time and a place for mobile devices,” says Schlussel, a West Bloomfield mother of two boys. “The dinner table is not it. Extracurricular activities are not it.”

Three hundred kids go through the Joe Cornell program every fall. Boys learn how to look a girl in the eye and ask her to dance; girls learn to look the boy in the eye and reply affirmatively, with kindness. They learn the importance of “please” and “thank you,” to have manners when they attend an event, to thank their friends’ parents before they leave.

“There’s no lesson plan for parenting,” admits Jasgur, a father of two daughters in West Bloomfield. “These are important lessons that stay with you.”

When my son enters his classroom every morning, he stops at the door to greet his teacher. They shake hands, look one another in the eye and say, “Good morning.” It’s part of the Waldorf approach to educating children from a whole-person perspective.

“That really teaches children to have eye contact with adults, and also lets the child know that they’re seen,” says Charis Calender-Suemnick, enrollment and outreach director at Detroit Waldorf School. The school’s no-technology policy “gives ample opportunity for human connection. All the material is coming from a human being.”

Morning circle recitations create interaction between students. They learn partnership by moving through motions and words together. Even in kindergarten, the children have teatime on Fridays to work on manners and the art of conversation with their teacher.

The school’s no-technology policy comes from a philosophy to avoid pre-made images that might “inhibit a child’s imagination or growth,” says Calender-Suemnick. “We want them to build pictures in their mind.” Older students are required to check their phones into the office at the start of each school day.

Also at DWS, older students frequently approach Calender-Suemnick with a handshake, eye contact and a friendly greeting when they pass her in the corridor. “I don’t know other adolescents that give eye contact and are confident in their speech,” she says.

Jill Washburn, a Rochester mother, broadcast journalist and frequent school speaker about the importance of public speaking, believes “texting is ruining communication in America. It’s symbols and horrible spelling and complete lack of punctuation, and it trickles down to other parts of our lives.

“It’s really important to know how to converse with people, how to engage, how to convey your message and be interested in what others have to say,” Washburn says.

From the time her daughter was a toddler, Washburn encouraged her to communicate “to the best of her ability on a more adult level. I would talk to her and say, ‘Hi, how are you?’ and encourage her to say, ‘I’m good, how are you?’ Asking about the other person and listening to them is a huge part of engagement.”

When she speaks in schools, Washburn calls students up to the microphone one-by-one and asks them their name. She employs her interviewing skills to pull the child out of shyness and into conversation. Most audiences are encouraging, she says. “They want you to succeed.” Once kids realize that, it makes speaking – and conversation – less scary.

From Kings Island to Medusa's Slidewheel and more, here a few last-minute excursions to enjoy with the kids before the new school year.
Read more
Advice

From boogers to pen caps, here's why some kids can't seem to keep strange and stomach-turning things out of their mouths.
Read more
Things to Do