Teens and Too Much Texting

Is your child's cell phone turning into an appendage? Here are six ways to curb your kid's addiction. 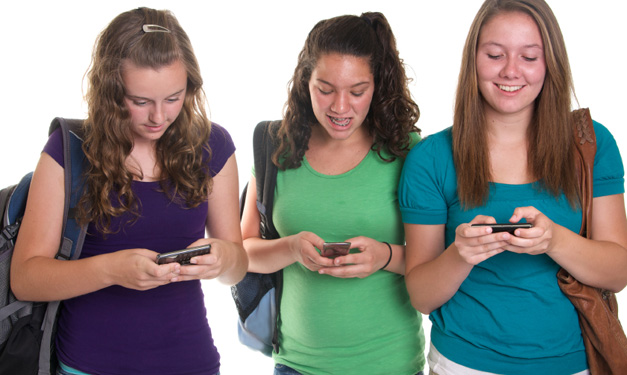 Can your 14-year-old text a full paragraph to her BFF faster than she can dial the phone number to call her? She’s in good company.

According to a Nielsen Co. report, 83 percent of teens with mobile phones are using them for texting. Even more revealing, “the average U.S. mobile teen now sends or receives an average of 2,899 text messages per month compared to 191 calls. The average number of texts has gone up 566 percent in just two years.”

In other words, most teens have become proficient texters, mastering the shortened, written blurbs sent to friends, but when it comes to actually speaking to their these friends on the phone? Well, they’d rather let their fingers do the talking.

What are the risks?

Researchers are just beginning to understand and theorize about the downfalls of overtexting for teens. They’ve already noted that teens are missing out on learning how to read a person’s physical and verbal clues because they text more than they talk.

The subtle changes in tone when someone is expressing affection, the shifting body position when someone doesn’t want to reveal something, the sarcasm that’s revealed when someone rolls his eyes – those nonverbal cues are lost on text messages, no matter how many emoticons you use.

If you’re concerned your teen is a bit of a text addict – that she gets jittery every time she’s separated from her cell phone – Mary Jo Rapini, co-author of Start Talking: A Girl’s Guide for You and Your Mom about Health, Sex or Whatever, offers some ideas for parents.

Teens are texting – that’s not going to change. As a parent, you need to understand our teen’s favorite tech tool (not master it; just know how to use it). Rapini says you don’t have to become your teen’s new texting BFF. Just send her an occasional text.

Help your teen get used to talking on the phone by calling her yourself (chances are her friends won’t be).

Teens aren’t too old for get-togethers with friends. Rapini describes texting as often a selfish, superficial way to communicate.

“You aren’t listening to what the other person is saying, or looking them in the eyes, you’re simply writing a message and then hitting send. Texting has basically no accountability or responsibility attached to it.”

Give your teen face time with friends by encouraging them to have friends over (and check the phones at the door). Teens need time to talk to each other in person to gain valuable skills at communicating – in person.

Sitting around the table for a meal can be a perfect time to let teens talk face-to-face. So make sure to find time for your family to sit down together for at least a few meals during the week.

Teens often pick up their affection for their phones from their parents – not just their peers. They may not have been seen you texting, but if your cell is always glued to your ear, they’ll learn that talking on the phone is a priority for you. So why not for them, too?

Even if you have an unlimited texting plan on your teen’s phone, that doesn’t mean that they should have unlimited access to that phone. Have a curfew for texting – say 9 p.m. – or come up with other guidelines for your teen, so that she’ll have time for real face-to-face conversations – not just finger-to-finger ones.

Brought to you by Sloan Museum of Discovery
Read more
Health