The Bully’s Parent: What to Do When Your Child is the Bully

Here's what you can do to put an end to bullying for the sake of your child AND the kids he targets. 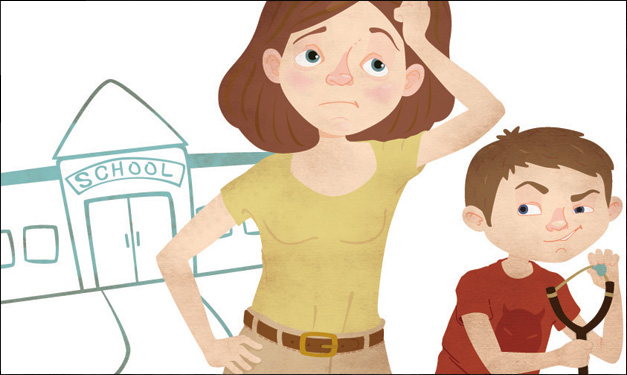 As a child, Teresa Nowicki was a little pudgy, meek and wore glasses. It’s those three traits that she felt made her grade school years misery – especially recess.

“I was just a magnet for mean kids,” says the Macomb Township mom of two. “If there was a bully within 10 yards of me, you could bet he’d sniff me out. It was hard. I felt terrorized. And I never wanted my children to go through that.”

That’s why she says it “killed her soul” when she discovered that one of her sons was having problems with bullying.

“I was nice to him all morning, made him pancakes. I felt so sorry for him,” Nowicki says.

But when she got to school, she discovered that her son wasn’t being bullied. He was the bully.

“I almost threw up,” she says. “I couldn’t even look at him the same way at first. I just kept thinking, ‘What did I do wrong?'”

Bullying has become an issue of dire importance to educators, researchers, parents and students. In recent years, an alarming number of bullying victims have either turned their pain inward and committed suicide, an act now being termed “bullycide” in the United States, or they have taken up weapons to strike back at students they blame for their pain.

Most cases of bullying are not so outwardly dramatic, but can still have devastating and long-lasting effects on the victims and, many now believe, on the bullies, as well.

The National Crime Prevention Council says “kids who bully are more likely to do poorly in school, smoke and drink alcohol (and) commit crimes in the future.”

A 2001 National Institutes of Health report found that 29 percent of all American children reported being involved in bullying in a given school year, either as the victim or the bully. Interestingly, 16 percent of the kids said they had been on both sides of the behavior, as both bully and bullied.

And yet, while a great deal of information is available on how to help the victims recover from the abuse, far fewer resources exist to help parents of kids doing the bullying. Here, local educators and bullying experts offer parents advice on what to do when their child is caught on the wrong side of a bullying incident.

If your child is caught bullying, the first step is to sit down and talk – to your child and to the school personnel.

“I want to, first of all, listen to my kid and hear what has been going on,” says Glenn Stutzky, L.M.S.W, a clinical instructor at Michigan State University’s School of Social Work and an expert on bullying issues. “Sometimes you might find out that what they’re doing is trying to deal with a situation where they themselves have been a target. Sometimes kids are labeled as bullies, but they are what we call ‘provocative victims’ where in essence they are victims, but because of the way they respond, they end up getting in trouble at school.”

Next, parents should talk with the school staff to get the rest of the story.

“Approach the school as an ally rather than an adversary,” says Bloomfield Hills psychologist Jeffrey DeGroat. “They’re there for the child’s best interest, ultimately, and knowing that there’s a parent who is interested and willing to help, they’ll work with you and it will be best for the child. Once you’ve got communication with the school, find out what’s going on.”

Once parents have established that their child has indeed exhibited bullying behaviors, it’s time to make it clear that the behavior will not be tolerated.

“Parents love their kids and they want the best for them. They don’t want them to be out there bullying, but sometimes they don’t know what to do,” says Jill McDonald, national bullying expert. “So we’ll talk about things they can work on at home. These are hard conversations sometimes, but we have to be consistent in what the school expectations are.

“Overlooking the behavior is basically giving permission to let it happen.”

Decide on and apply non-punitive consequences for past and future bullying. All parents, especially those whose kids have a history of cyber bullying, should monitor their children’s cell phone, texting and computer usage. If the kids balk, take the devices and accounts away.

One of the keys to immunizing kids from becoming bullies, or to help them after the behavior has been recognized, is to work on their sense of empathy.

“Parents need to talk to their kids about things like that, about being kind, feeling empathy for other people and showing respect to all people,” says McDonald. The parents should also take a closer look at their own attitudes.

“Kids sometimes pick up aggressive thinking and behaviors from people around them. If we as adults show intolerance and don’t take the time to be empathetic, they learn from that.”

Having children apologize to their victims is a great way for them to demonstrate that they are taking responsibility for their past actions and moving forward.

4. Develop a behavioral plan with the school

School administrators may also advise drawing up a concrete plan to help the child learn how to manage his own behavior, especially for kids who have explosive anger issues at school.

“Develop a behavioral management plan with the school that lays out what the child can do when they start getting upset or when triggers start occurring, giving the child a way to remove themselves from the situation to try to break away from the cycle of escalation,” says Dr. DeGroat.

5. If there’s still a problem, seek outside intervention

Kids who have not learned appropriate social skills can seek out help from school social workers, counselors or community organizations. “They may need more help,” says Jennifer Hartenburg, a counselor at Troy’s Smith Middle School. “Maybe some kind of social skills group or outside counseling on how to handle conflict or anger management and how to interact with people in a more positive way.”

In some cases it may be apparent that a child’s bullying is a symptom of a deeper issue. In that case, therapy may be useful.

“It’s a chance to help children recognize these inner feelings and conflicts they’ve created that perhaps no one knows anything about,” says Dr. DeGroat. “So even if you do work out things with the school, the child may still have a conflict within themselves, low self-esteem, or guilt, whatever is fueling these behaviors. That’s something therapy can help with.”

For any of these plans of action to help, the parent and the child need to take responsibility for bullying behavior and be willing to change.

Most experts agree that the worst course for a parent to take to combat bullying behavior is harsh punishment, which simply encourages the cycle of harsh behavior.

“The temptation sometimes when dealing with someone who has bullied is to try to bully them into stop bullying – and it usually doesn’t work,” says Stutzky.

For Teresa Nowicki, that was never an option – though she was tempted.

“We are not a house that uses corporal punishment, but I have to tell you, I wanted to shake the crap out of my son and say, ‘What the hell were you thinking?'”

But after tempers calmed and she processed the disappointment, she and her husband did what was most important – they tackled their son’s bullying head on.

“It wasn’t easy,” she says. “We really had to really hammer home the effects his bullying had on the kids he picked on. It’s a funny thing. I think sometimes kids just don’t think. They just don’t realize how hurtful they are being.”

Recovering bully Andy Tomkin agrees. Because no adult ever tried to help him stop his bullying behavior, he had to experience his own series of failures well into his 20s before deciding to turn his behavior around. “It took me a long time to learn that this isn’t the proper way to live,” Tomkin says. “I knew there was something missing in my life that other kids had but I didn’t. And that turned out to be compassion, pride and responsibility.”

“If you don’t like the way you are, you have the option to change,” Tomkin advises kids. “It takes a lot of work. It doesn’t happen overnight. But you can become who and what you wish to be.”