The Dangers of Leaving Kids Alone in Hot Cars 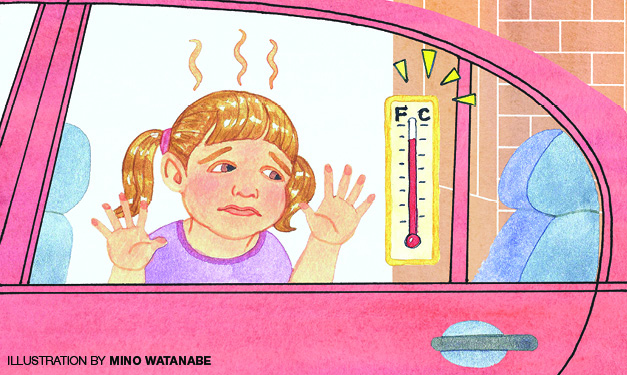 In just 15 minutes on a hot summer’s day, the temperature inside a parked car can skyrocket from 80 to more than 100 degrees – and that’s with the windows rolled down 2 inches, according to the National Highway Traffic Safety Administration.

Imagine if the windows were closed, and your child was locked in the car as you ran an errand. That seems incredibly dangerous, right? According to a survey by the Public Opinion Strategies of Washington, D.C., seven in 10 parents are aware children can suffer from heatstroke if left in a car alone. Yet some still left their kid unattended for a period of time.

Why? Joann Moss, education coordinator with the Kohl’s Injury Prevention Program of Children’s Hospital of Michigan in Detroit, says it’s simple. “Most people think, ‘This won’t happen to me,'” explains Moss, who’s taught injury prevention for 10 years. Parents may leave their child alone once and the kid is fine, she says, so they do it again without thinking of the consequences.

What many parents don’t realize is that a child’s body heats up three to five times faster than an adult’s, according to Safe Kids Worldwide. Once that internal temperature hits a certain point, it can be fatal.

“By the time they get to 107 (degrees), their major organs are going to start shutting down,” Moss says. An average 38 kids die as a result each year, notes KidsAndCars.org, a public-safety advocacy group.

“Younger children many times don’t have the ability or knowledge or physical ability to get the door open or the window open,” he says, “and they suffer the consequences.”

Still, it seems parents are taking the chance.

The survey found 14 percent of parents say they’ve intentionally left their infants, toddlers and kindergarteners alone in a parked car. Twenty-three percent of those with kids ages 3 and under reported doing so.

In addition, 11 percent said they’ve forgotten their child in a car – and, for those with kids ages 3 and under, it’s nearly 1 in 4. Finally, dads are almost three times more likely than moms to leave a child in a parked car.

Moss believes forgetfulness is one of the main culprits. We live in very busy society, she says, and if your child isn’t part of your normal routine – maybe dad is taking him out on errands when mom normally would – it’s easy to forget the kid is there.

Officer Nick Mitchell, who’s been working for the city of Rockwood Police Department for two years, has a different theory. “It almost seems like it’s just the parents being lazy,” he says. “They are not going to take three or four minutes to pull the stroller out when they are going to be inside for a minute.”

Mitchell tends to witness this behavior at convenience stores, where moms or dads will quickly run in to grab an item or two. But there’s no guarantee that these errands actually happen as fast as a parent thinks.

Use common sense, Collins says. “You gotta look at your child and go, ‘Is this a good idea or not?’ If you have to ask that question and you can’t answer it in like a second or a split second, then you bring your kids in with you.”

If forgetfulness is part of the problem for you, here are a few helpful tactics.

“Always put something that’s very important to you with the child,” Moss says, like a purse or iPhone – anything you can’t leave the car without. So, when you open the back door, you’ll see your child there too.

Need another reminder? Try a teddy bear. Get in the habit of putting it in the car seat. Remove it when you put your child in the seat and, then, place the bear on the passenger seat next to you. You’ll see it before you get out of the car and remember the infant in the car seat. Place the bear in the vacant car seat once again – and keep this system up.

“We want to remind them to ACT,” Moss adds. That stands for  avoid  heatstroke, create reminders (put something in the back seat) and take action if yo u see a child left alone in a car (call 911 or the police).