The Power of Parent-to-Parent Time

For these local moms and dads, nothing beats some time sharing the unique trials, tribulations and triumphs of parenting a child with special needs. 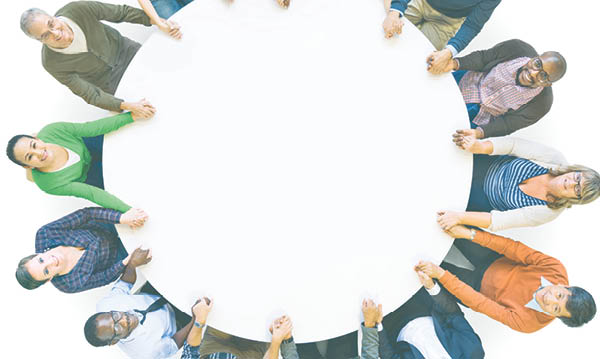 Ten mothers with 10 powerful messages shared their best life lessons about raising a child with a disability while a roomful of moms parenting younger children silently but eagerly absorbed each and every word.

Lisa LaBelle, a Birmingham mother of two, including a 12-year-old son with Asperger’s syndrome, furiously scribbled notes while these 10 women spoke candidly about the struggles and joys that accompany raising their children. Throughout the presentation, LaBelle kept thinking, “They were in my shoes 10 years ago and they’re OK. They’re getting up every day, they’re laughing and they’re happy.

“Hearing them made me feel like, ‘When my kid is in his mid-20s, it will be OK,'” says LaBelle. She says she walked away with the realization that it was time to really enjoy her children and stop worrying so much. She went home and immediately challenged her son to a game of basketball. He won easily.

LaBelle had her moment of clarity last month when she and 41 other moms participated in a weekend retreat designed to pamper, connect and inspire mothers of children with special needs.

This group eagerly awaited this retreat since either participating in it previously or hearing about it from past participants who couldn’t stop talking about the power of spending a weekend with others who understand exactly what it’s like to parent a child with a disability.

The event, called Shabbat at the Spa, was sponsored by the Friendship Circle, a nonprofit organization in West Bloomfield, offering programs and services to children and young adults with special needs and their families. Although a majority of Friendship Circle programs and services are not religion-based, this retreat was centered on gaining inspiration from Jewish philosophy and the celebration of Shabbat, or the Jewish Sabbath.

Talk to a parent of a child with a disability and chances are they will discuss the relief of being able to connect with another parent who “gets it.” “Getting it” means sharing stories without judgment in a world where their child is constantly judged. “Getting it” means hearing advice or encouragement and believing it because the other parent shares your similar experience.

Parents and professionals like Julie Zorn (who is both) point to the power in connecting with another parent who understands the unique challenges associated with raising a child with a disability. Whether it’s participating in a weekend retreat, online chat group or traditional support group, building connections helps parents feel less isolated. Plus, parents are frequently the best resources for information.

Zorn has two boys, ages 14 and 11, with autism – and she is a school social worker with a private practice. She has been participating in Shabbat at the Spa since its inception three years ago.

“The weekend was like an espresso shot of moms connecting and supporting each other,” she says. “For an entire weekend we were parents coming together and talking to each other not only about our problems, but also about the things we want to celebrate. It’s so much different than having a professional stand up and give a speech. Sharing the collective wisdom of a group is so powerful.”

After a relaxing girls weekend up north, Julie Cadman realized that taking time away from the challenges of raising a child with a disability was just what she needed to recharge emotionally. Cadman, who is president and CEO of Healing Complex Kids in Rochester Hills, also felt that a rejuvenating weekend would help so many other moms, especially the ones who called her office mentioning feelings of isolation. Because these mothers desperately needed to connect with others beyond the internet, Cadman recruited a group of women for what would be the first annual Warrior Moms’ Pajama Party.

Next month, Cadman expects more than 100 moms to spend 26 hours together for the third annual pajama party in Clarkston. Participants will listen to motivational speakers, have a chance to participate in activities such as a bonfire, get makeovers and footbaths and sample great food, including gluten-free and dairy-free treats.

Nicole Grabowski of Warren is looking forward to her third Warrior Moms’ Pajama Party because it’s a time where she can actually slow down. In the past she has arrived feeling physically and emotionally spent from the challenges of raising a son with autism and twins with severe ADHD. “Just being able to sit in silence and not have to worry about my children is an amazingly powerful thing. This was probably the first time in 10 years that I was actually able to sit and clear my head and be with people who didn’t judge or pity me.

“You don’t realize just how much you need it until you’re there,” adds Grabowski. “When you have a child with autism, your world is different. We’re not able to just pick up and go like other families. When you get a diagnosis, you feel all alone. You need those moms in your life who can answer your questions and remind you that you’re doing exactly what you need to be doing.”

Going away to a retreat or even getting out for an evening can be especially hard for the parent of a child with a disability, making online parent groups not only popular but numerous. There are all types, including options for parents of children with extremely rare conditions.

“At the hospital, no one knew what to tell us,” says Rosenzweig of West Bloomfield. “We felt totally alone and the things we were reading online were really scary.”

Rosenzweig found the National Organization for Disorders of the Corpus Callosum during an online search and has since attended national conferences and met other families like hers. She also started an online Facebook group for moms of kids with the disorder to “share the happy stuff” and provide a parent-to-parent resource.

“Not everyone is going to think it’s a big deal when my daughter picks up a spoon and feeds herself or when she walked at 2 1/2,” Rosenzweig says. “I wanted a place where people could share the positive things, so that not everything online is about the nightmares. This type of online networking has also given us an opportunity to get to know the adults with ACC and hear about how they are living happy, fulfilling lives.”

In addition to the yearly Friendship Circle retreat, Shabbat at the Spa participants also participate in a closed Facebook group where frequent daily posts can be on anything from recommendations for a speech therapist and requests for prayers to suggestions for dealing with difficult behaviors or funny stories that others may not find so funny.

This Facebook group is the first and sometimes the only place these moms will post because they know they have the support and understanding of a very caring and nurturing group of women, says Sarah Schectman, a family coordinator with Friendship Circle and planner of Shabbat at the Spa.

A few years ago, Friendship Circle started a dads group – but not a support group, organizers say, because dads are reluctant to get involved on that level. What’s worked well for the dads is a night out, such as a Pistons game, barbeque or and other social activity, says to Rabbi Tzvi Schectman, also a family coordinator with Friendship Circle.

With six or seven dads nights a year, Schectman says the events give fathers a much-needed chance to be with others in a fun environment where they can share their feelings and experiences if they want to. Only recently did this group decide to meet with the purpose of specifically discussing their special needs children.

The Healing Haven in Berkley planned an informational meeting this month to unveil an upcoming dads support group.

Fathers play an important role in the development of their children with autism, says Jamie McGillivary, director of Healing Haven, which offers services to help families cope with the stress of having a child with special needs and support programs for families running a behaviorally based program.

But fathers, she says, often struggle with finding a balance between work and family life, communicating their needs and managing stress. This group is designed with that in mind, says McGillivary.

“There is tremendous power in parents connecting and sharing their experiences,” says Cadman, of Healing Complex Kids. “They lift each other up, inspire and offer advice – and this is so critical on this journey of parenting a special needs child.”