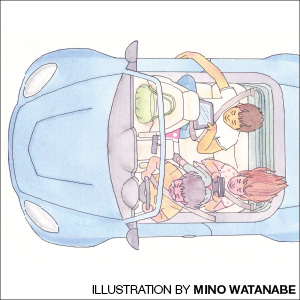 Sixteen-year-old Erin Loch couldn't stop smiling. With the windows rolled down and the moon roof popped open, the moment was perfect.

"I've been excited for years and years, so I wanted to get it as soon as I could," says the Farmington Hills teen.

Erin is talking about her driver's license – the ultimate sweet 16 present for teens across the country.

But according to a recent University of Michigan study, nationwide, fewer teens are joining Erin on the road. The study, conducted by Michael Sivak and Brandon Schoettle of the U-M Transportation Research Institute, paints the picture of a national decline. They found that just six out of 10 Americans ages 17-19 have a driver's license today, compared to eight out of 10 in 1983. But do these numbers apply in Michigan, home of the Motor City? According to statistics provided by the secretary of state, they do. In Michigan, only 69.7 percent of teens ages 16-19 held licenses in June 2012, an almost 15 percent drop from 2001.

Key reasons for the drop

So what's causing this trend?

"My mom is a stay-at-home mom and my friends all drive, so anywhere I go, I have a ride," says 18-year-old Katie Diekman of Farmington Hills, who hasn't hit the roads – even after her first year in college.

For 18-year-old Jed Johnson of Marquette, driving wasn't a priority. With a busy high school schedule consisting of AP classes, orchestra practice and college applications, driver's education failed to make the cut. "Some people give me a hard time for not having a license, but once I tell them I had 10 AP classes and a ton of extracurriculars, they usually back off," Johnson says.

Statistics from the College Board, the organization administering Advanced Placement tests, reports that the number of AP tests administered has nearly tripled, from 1.2 million tests in 2001 to 3.2 million in 2010. Ambitious academics and school enrichment may be two big culprits for the teen driving delay. Melvindale's Brook Maggard, 19, says she also was too busy with activities and sports. "I put my time into other things besides learning how to drive," she says.

Lee Alpern, owner of Farmington Hills-based Lee's Driving School, has noticed the trend, too. He's been teaching driver's training since 1968. Since May, Alpern has run full classes – capped at 36 students by the state. But for the upcoming September session, only two people have registered – and he expects only a few more.

Alpern believes packed school-year schedules cause low September through May enrollment, while the freedom of summertime brings a bustling June through August. "Kids are busier than they used to be. When school starts, there are so many activities. I'm afraid the trend will continue," Alpern says.

Alpern thinks some of the decline has an economic base. Many teens wait until turning 18, when driver's training – which runs about $300 – is not required.

Economic influences have an even wider impact, according to Lori Conarton, communications director for the Insurance Institute of Michigan. Gas prices, car costs and insurance for young drivers all play into the decision to drive. "With the economy in Michigan, it's probably harder for young people and parents to afford all these things," she says.

Conarton also cited increased local transportation, walkability and social media as other reasons for decline. "The times have changed," she says.

According to the University of Michigan study, sites such as Facebook, Skype and Twitter make seeing friends in person less of a priority.

But 16-year-old Gillian Greenbaum of Farmington Hills, who doesn't expect to get her license for another year, disagrees. "Even though you can talk to your friends online, seeing them is more fun. People still like to get together," she says.

"I'd rather meet face-to-face and just ask my mom to drive me," adds Brook, who only recently got her license after the cost of renewing her permit began to pile up.

On a cool July evening, Erin heads out with her newly licensed friends. Keys in the ignition, it seems the freedom and fun of late-night 7-Eleven runs aren't so easily replaced by the latest status update or intensive schedule.

But for Erin, the streets may feel a little lonelier, as fewer teens continue to share the road.