Tips to Get Your Kids to Try New Foods 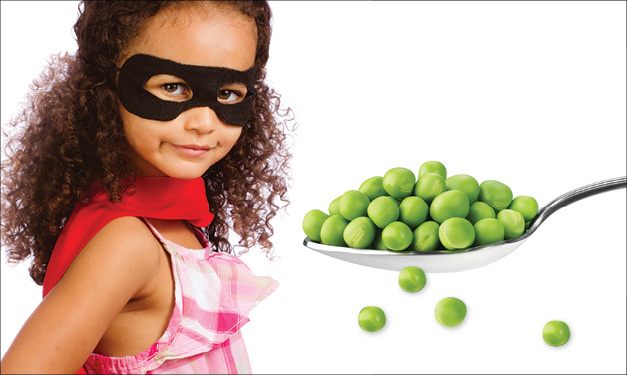 The dinner table can often become an unhappy battleground for children and parents. While parents try to entice kids to try new foods – or at least to eat a wide variety of healthy ones – kids refuse and stick with their tried-and-true staples like plain pasta or chicken nuggets. So the battle lines are drawn with kids on one side refusing to eat anything beyond their regular foods and parents on the other, doing their best to get kids to take even one bite of broccoli, fish, cooked carrots or quinoa.

Here's how to tip the battle in your favor: Every so often, try a mealtime game to encourage your child to try something new. You can't play a game at dinner every night, but an occasional, creative game can help jumpstart your child's interest in new-to-them foods. Follow up the games with regular habits of continually offering your child foods they've refused in the past at each mealtime – even if it's just one piece of cauliflower on the side of their plate and they don't eat it. Seeing the food continually helps your child become familiar with it and more willing to try it. Another key is to set an example for your child. If you eat a wide variety of foods, chances are that your child will, too … eventually.

These mealtime games can take some of the stress out of picky eating. And if your kids won't play? Play on your own in front of them or with another adult at the dinner table. As a reward for a well-played game, offer to do something fun with your child – like going for a walk or playing a board game together. Here are five food game ideas to get your started.

Are your kids into comic book heroes? Or perhaps other animated action heroes? Let them come to the dinner table dressed as their favorite hero or cartoon character. Explain to them that heroes need enough food to be able to fend off villains. Serve them a bowl of steamed vegetables or another food that they normally wouldn't eat. You might even have your child brainstorm what kind of food the Black Widow, Iron Man or The Incredible Hulk would eat (the Hulk would gobble something green, right?!). Then, have them eat up – suggest to your child to act like the character as he or she eats. Remind him that he needs to finish up so you can go and fight Loki.

Create a picture out of your child's next meal. For example, use a spoon to make mashed potatoes into a wavy shape at the bottom of the plate, and then place broccoli as trees and bushes. Use chicken tenders as clouds. Another idea is to make smiley faces – pasta can be the smile, two zucchini or cucumbers can be the eyes, a black olive can be the nose, and the hair can be shredded carrots or lettuce. When you serve the meal, ask your child what part he's eating, like "Did you just have one of the clouds?" "I just ate the nose!" Once your child gets the idea, he can come up with the food picture at a future meal.

Let your child become a food reviewer with this game. Create a simple food review sheet on a piece of paper – write the name of the food or have your child draw a picture of each item along the left-hand side of a sheet of paper. Then have a column across the top of the paper listing different reactions to the food, such as "Liked it," "OK, but not my favorite" and "Didn't like it." You can also create these reactions visually with a smiley face, a flat smile (for a so-so reaction) and a frowny face. As your child eats, encourage her to rate each part of her meal. This approach gives her a say in what she's sampling – she'll learn it's OK not to like a certain food, but trying it is good.

While preparing dinner, set up three or four small plates with various vegetables like carrots or snap peas – and one food you know your child really enjoys. Make these small servings; larger portions can be intimidating for picky eaters (the goal is to guide them toward becoming more willing to eat different foods, not necessarily to finish their serving). Cover each plate with an inverted bowl so your child can't see what's underneath. Serve your child her normal dinner but let her know that, as a side, she's going to get to pick from the mystery plates. Whatever she picks, she needs to at least try. She can then either choose to finish off that dish or pick another mystery plate. You can get into the fun, too, by selecting and finishing off your own "mystery plate" from among the choices on the table.

Kids often like a challenge – even if it involves a food they normally wouldn't eat. This game can be more effective if you have a sibling issue the challenge, but it can also work if it's the parent. Start by offering a food that's small, like a bowl of whole kernel corn or peas. Then explain to your child that you want to challenge him, something along the lines of, "I bet I can eat 20 peas in 30 seconds." Have your child man the stopwatch and time you as you eat the peas. Then it's their turn. Make the challenge doable, so that your child feels like a success after it's over. Aim for one or two challenges. Again, the idea is to make trying new foods fun for your child.