14 Ways to Get to Know Your Neighbors

Southeast Michigan residents offer 14 surefire ways to get to know your neighbors and develop a relationship with them, too. 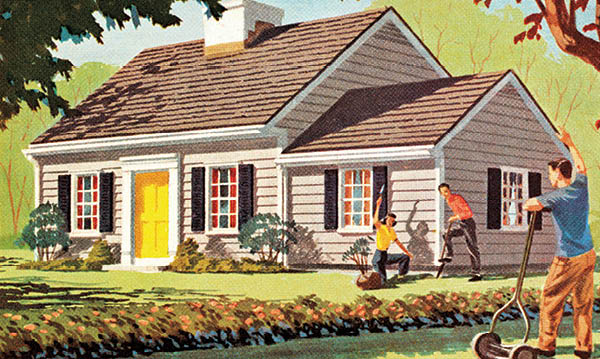 Do you know your neighbors by name? Would you even recognize them if you saw them at the grocery store? Sadly, too many of us would answer ‘no’ to those questions. But it doesn’t have to be that way. Here, we offer tips on how you can connect with the people who live in your hood.

Many of us don’t know our neighbors – those people whose cars you see in driveways or whose televisions flicker from windows at night – even though, in the words of Bloomfield Hills psychotherapist Pam Vaughan, we’re wired to be social.

But a neighbor can provide many benefits – like keeping an eye on your house while you’re out of town for a week or two. Or they can serve as an emergency contact for your child at school. They can even provide a bit of neighborly chitchat at the end of a crazy day.

So why is it that we don’t often make the effort? One reason could be that “the motivation or desire to get out of the house and meet your neighbors goes way, way down because we have everything at our fingertips,” Vaughan says.

That means your cell phone, iPad and laptop computer. And oh heck, let’s throw Netflix in there, too.

Vaughan thinks our interpersonal relationships are suffering – and are going to get worse before they get better – because of that technology. “Before cell phones … you wouldn’t be on your bed flipping through Facebook, so you’d be outside more.” And the simple act of being outside makes it easier to strike up a conversation with a neighbor. To get to, well, know him or her – even if you don’t become BFFs.

Lisa Peers may have struck gold with her neighbors, who host block parties, half block parties, women’s night dinners and drop-by happy hours in her Birmingham neighborhood. “We certainly have more of a friendship with our neighbors than a lot of places,” she says. “You start with one kind of social event and that can lead to something else.”

And in spite of our contentious political climate, they don’t let their views get in the way. “We have a varied group of people politically on our street, but we can set that aside and still have a good relationship with them,” says the mother of two, admitting, “We have times when we post a sign … that says, ‘Absolutely no politics.'”

So not only can neighbors fill a basic human need for connection – or a practical need in daily life – knowing them may contribute to a little more peace, love and understanding in the world.

If you are like most of us and need a little nudge in the “being neighborly” department, here are over a dozen ways to get to know those people who live down the street.

1. Give the neighbor’s Tupperware/jewelry/candle party a chance

I admit it. I dread those invitations. So when I received one to our next-door neighbor’s jewelry party several years ago, I looked for any excuse to decline. Instead, I said “yes.” Not only did I enjoy the company of our warm and funny neighbors, they explained (in all its glorious detail) the beauty of the DVR – which I promptly ordered from our cable company when I returned home. (Too bad I’m in the habit of recording shows I’ll never watch.) Oh, and I bought a pair of amethyst earrings.

No need to make it complicated. When Martina Rehm moved from Germany to Clarkston, she held an open house party, offering only finger foods and drinks. “It was a great way to meet everybody,” she says. Eventually, those connections segued into other activities, including an Easter egg hunt for the kids on the block and an annual potluck Halloween party, which neighbors took turns hosting. “One year, on the Fourth of July, we had a fireworks (display) where we all gathered and contributed (food). The kids loved it.”

When psychotherapist Vaughan and her husband watched a neighbor’s canine, Bugsy, for two weeks, they were introduced to an unfamiliar morning ritual: walking the dog. “It’s amazing. There’s a whole hidden social culture out there at 5:30, 6 a.m., when people are out walking their dogs. I met more people that way” – including the neighbors who live behind her.

Don’t underestimate the power of the fluke meeting. When Canton resident and grandfather Dan Riley moved into his current neighborhood years ago, “I was backing out of the driveway on an icy winter evening and slid across the street into my neighbor’s parked car. I went up to the door, introduced myself and we have been friends ever since.”

One event I look forward to every year is a holiday cookie party hosted by my neighbor two doors down. We all bring a plate of homemade Christmas cookies. The objective: to mingle for a couple of hours while eating everyone else’s cookies. I can handle that! Plus I get to compare the hostess’ 1960 ranch to our 1960 ranch. We have the same brick fireplace, slate floors and small kitchen, along with the large living room – built back when people actually used them – but with different floor plans.

Led by a dad known as the “cruise director,” it seems a group of fathers have transformed Laura Hedgecock’s Farmington Hills neighborhood into an intergenerational paradise. Last December, “I heard children laughing and the clip clop of horses’ feet,” says Hedgecock, whose children are grown. “I ran outside to see two beautiful draft horses drawing a sleigh (on wheels), full of children, through the neighborhood to look at Christmas lights.”

The adults weren’t left out of the proceedings – when it was their turn on the sleigh, “the dads even had coolers on board with a variety of beers.”

The dads have also made haunted houses, last-day-of-school banners for the kids to break through as they get off the bus and have instituted a 9 p.m. New Year’s Eve celebration.

7. Have some playful fun

The dads aren’t above good-hearted pranks, either. “When one family was gone for the weekend, a group of neighbors had breakfast on the family’s deck,” posted photos of their gathering on Facebook and waited “for the out-of-towners to catch on,” adds Hedgecock.

My husband thinks the mysterious (or even seemingly aloof) neighbor can be among the best. They may be older or single or hermetic or just plain anti-social, but they are also often interesting and helpful when asked. Ours retrieved our mail for us during summer vacations with our kids.

“One of my neighbors just installed one, and everybody is gathering around it now,” metro Detroit writer Karen Dybis says, referring to a little outdoor structure that stores books. The nonprofit organization Little Free Library “inspires a love of reading, builds community and sparks creativity by fostering neighborhood book exchanges around the world,” according to its website, which also explains how to install a library. “You can build your own little library, find someone locally to build one for you, or purchase a library through our online catalog.” For more information, visit littlefreelibrary.org.

10. Let your kids make the introductions

I know, I know: With all the nutty people in the world, you never know when one of your kids will be snatched off the street and blah blah blah. But hear me out. In a long ago and far away time, playing outside was crucial to my 9-year-old self. So when my family moved from Detroit to a Chicago suburb, I knocked on all the neighbors’ doors and asked if there were any kids at home I might play with. And I lived to tell the story!

When Dave and Jackie Fredrickson moved into their Troy subdivision over 20 years ago, they wanted to “get to know all the neighbors.” So getting involved with the neighborhood association “was one of the first things we did,” Dave says. For more than a decade, they have both held leadership roles, preserving neighborhood traditions: annual Halloween parades, Easter egg hunts, May garage sales and the distribution of Christmas Eve luminaries. They have since added a summer picnic to welcome new homeowners and, last year, placed miniature flags up and down the streets for Memorial Day weekend.

Dues are voluntary – $20 a year. While not all homeowners pay their dues, they collect from enough households – around 65 percent of them – to keep everything going. “Anything we do that focuses around kids is a bigger draw than things that focus on adults,” Dave says.

Having a core group of volunteers to rely on can be helpful, though he’s noticed that people are motivated by activities that interest them. “The person who does our Facebook page has a passion for it,” he says. “Someone else volunteered to clean up the subdivision’s sign in front and plant flowers.”

One tradition the Fredricksons are sticking with no matter what: their annual leftovers party between Christmas and New Year’s. “When you can’t stand the sight of that leftover cheesecake anymore,” says Dave, it’s a great excuse to share it with the neighbors – who bring their leftovers, too.

Every year, my sister-in-law Peggy attends a holiday party for the home dwellers on her street in Rochester. “When we leave, the host gives us all a ‘goody bag’ with something that was home baked.” Yum.

The guests reciprocate with a dog or cat gift – which is then donated to an animal shelter where the host’s daughter works.

In Peter Lovenheim’s book, In the Neighborhood: The Search for Community on an American Street, One Sleepover at a Time, the author discusses the impact of the Internet on neighborhoods. After “decades of experience … (we’ve learned) the Internet can strengthen relations among neighbors and it can weaken relations; it all depends on how it’s used.”

For some, it seems the social media site Nextdoor strengthens relationships. “It is a great place to network, sell or give away items and keep up with the neighborhood issues,” says Royal Oak resident Lynne Cobb. Former Ann Arbor resident Dennis Todic thinks so, too. “You can communicate with all the neighbors that join about contractors, burglaries, lost dogs,” he says.

Others swear by their neighborhood’s Facebook page. “I actually really like it,” says psychotherapist Vaughan, noting the irony of using social media to meet neighbors rather than outside while gardening or shoveling your driveway. “You get to know names.”