When to Tell Kids They are Adopted

Not sure how to tell a child they are adopted – or when is the best time? Local adoptees weigh in. 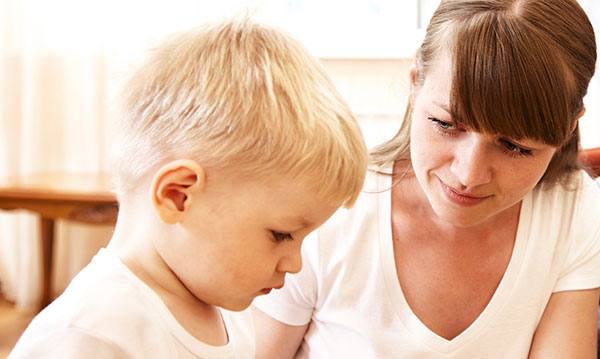 Carey Lariviere can remember telling her preschool classmates that she was adopted. While she knew the word, she says she didn’t really understand what it meant until her preteen years when she learned where babies came from.

Lariviere says her parents never kept it a secret that she was adopted and they shared everything they knew surrounding her birth, but they did make it clear that she was wanted and loved. Lariviere says knowing they felt that way made it easier to digest when she did realize that she was initially given up by her teenage birth mother, a woman she knows little about.

Many adoptive parents struggle with when and how to tell a child they are adopted. It begs the question: Is there a right way or time to tell a child?

Diana Ashley adopted her son from Thailand when he was 21 months old and he’s always been told he was adopted. He had lived in a foster home before being matched with the Ashleys. His transition to life with his new family, in a new home, in a new country was initially rough. To help ease his anxiety of leaving the life he knew, Ashley made a photo book of his adoption story and says that helped.

“When he was three, we made a storybook of how he came to be part of our family. I think that has helped a lot because he sees the pictures of those who were big parts of his life, the first time we met him and our family here,” Ashley says. “Kids join families in different ways, and we just let them know that.”

Ashley also has a daughter adopted from India. A first grader, Ashley’s daughter has been told since she was brought home at 19 months that she was adopted as well. However, she just understands she’s part of the family – even though not everyone looks the same. While there is no resemblance between her and the rest of her family, she prefers to keep her adoption journey a secret.

“We let them have ownership of it. We don’t talk about their family history without their permission because it isn’t our story to tell,” Ashley says.

Focus on the positives

“I was made aware I was adopted very early on,” says Macomb resident Jill Welch. “As a result, I was able to fend off the kids that teased me about it. I would say, ‘well, my parents really wanted me. They went to great lengths to get me.'”

Welch knows her story. She was surrendered at an orphanage in Korea. Her parents adopted her when she was 19 months old and brought to the United States where they were united for the first time.

“Instead of focusing on the negatives, I know that she wanted what was best for me,” Welch says of her birth mother.

Lariviere says she knows her mother was a young, Catholic teenager who was unable to keep her. However, it doesn’t stop the negative thoughts that come along with being adopted.

“Even though I know I was wanted and loved by the parents who raised me, I couldn’t help but wonder if there was something about me she didn’t like and that’s why she didn’t keep me,” says Lariviere.

Support the need to know more

Diana Ashley says she has no information about her daughter’s birth parents and very little to go on when it comes to her son, but he is interested in his heritage and has asked her to go with him to Thailand when he is 18 years old. He wants to try to find his birth mother.

“I have promised him I would go,” Ashley says.

Lariviere says she has taken the steps to unseal her adoption record and find her mother several times, but always gets cold feet.

“I told my parents about 10 years ago that I had some interest in finding my birth mother. I got a little bit of backlash from my dad. He wanted to know what he did wrong and why he and my mom weren’t enough,” says Lariviere. “It’s not really about relationship. The one thing I really want from my birth mother is my medical history.”

Lariviere doesn’t know if she’ll ever get up the courage to find her birth mother, but she says that regardless of the situation, she was wanted, loved and given the best life possible by her parents.

Welch says there is no chance of locating her birth mother since she was surrendered in such a rudimentary way, but she doesn’t let that bother her and hopes that other adopted children don’t either.

“God has a plan for all of us. I was supposed to be with these parents. This is my family,” says Welch.