It's a hot summer camp pick, thanks in part to films like 'The Hunger Games' and 'Brave.' Local programs provide a bull's-eye chance to get in on the fun. 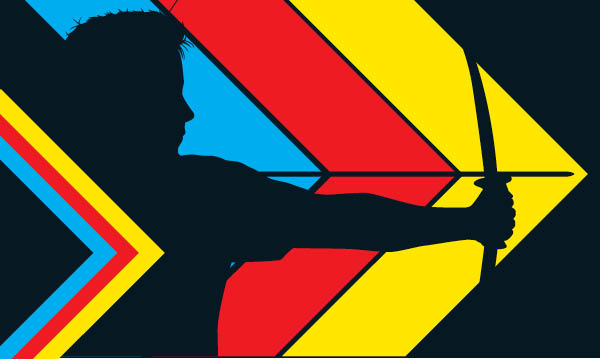 But Trisha Wright, 11, of Troy had her sights set on a banana.

“There was this giant six-foot-tall banana I wanted to shoot,” recalls Trisha. It was a carnival prize from Cedar Point that one of her dad’s archery students donated as a target. Dad agreed – if Trisha practiced with balloon and tic-tac-toe targets, first.

“I started shooting games, and that’s how I got into it,” says Trisha, who has her own pink camo compound bow. And it’s definitely different from the movies. “It was cool to see a Disney princess shoot an arrow, but we don’t shoot on horses!”

A couple years later, Trisha is an avid archer, along with older brother Travis, 13. And dad, Brandon Wright, is too: He now runs Rising Phoenix Archery in Troy, one of the largest archery training programs in the country.

“I guess you could say we caught the archery bug,” laughs Wright, who credits his wife’s father with gifting the kids bows for Christmas seven years ago. The family is in good company. Rising Phoenix is one of several Michigan programs offering kids a summer camp experience in archery – a sport that’s “rising,” too.

Archery has long been a traditional summer camp staple, with young campers training their arrows at five-color ring targets tacked to bags or haystacks.

“I think that’s where most of us got our little bit of taste,” says Wright who, before his kids got involved, hadn’t shot a bow since middle school himself.

But pop culture has definitely helped its bump in cool cred. The Archery Trade Association found a 14 percent increase in participation following the release of the first The Hunger Games movie in 2012. And many of those new archers are girls, Wright says.

“Female participation in the sport has astronomically grown,” Wright says. “In the past, probably one in 10 (archers) was a girl – now over half of the students are female. They’re competing at a very high level and it’s just awesome to see the sport grow.”

Trisha watched him, she warmed to the idea, adds dad, and now takes private lessons and competes semi-regularly. “I get excited when she says she wants to practice,” he says. “It’s pretty cool to watch your child grow and develop.”

At Rising Phoenix, he’s offering boys and girls ages 8-plus that same chance with beginner and intermediate indoor archery camps that run June-August.

Other new local programs have sprung up thanks to the Archery Trade Association’s expansion efforts. It created guides and grants for Michigan parks and recreation agencies hoping to build archery parks in their communities, explains Bryan Farmer, Farmington Hills’ special services director.

As a result, in 2015, the city opened Riley Archery Range at Heritage Park, which hosts camps for kids and open shooting for older archers. “It’s an awesome sport,” Farmer says. “You can get outside in the fresh air, and getting to shoot a bow takes you back in history and lets you be more at one with nature – it’s a unique activity.”

Farmer says other cities will soon join in, as mParks has received funding to assist six communities build ranges and train employees.

Riley now offers three camps, some with technical focus on proper skills and others that mix arts, crafts and survival skills with archery.

For the ‘atypical’ athlete

Wright says archery is also a good option for kids who aren’t interested in typical sports. “You don’t have to be the prototypical, ideal athletic specimen to excel at this sport,” he says. “You can be the kid that’s good at standing still.”

That’s not to say the sport isn’t challenging. In the seven or so years that Wright has been shooting, he’s never scored a perfect game. In the type he plays, that means hitting the X with 30 arrows at 10 points each, for a total of 300 points.

“You can always improve,” he says. “I thought I knew archery after all these years, but I’m still blown away by the fine mechanics.”

“It’s a huge mental sport,” Wright says. “There are 113 individual steps to execute a shot properly. It’s just like typing your shoes. You’ve got to not think about your steps.” Kids learn them all at his camp. “We don’t water down anything that we do.”

To boot, “I think it builds a lot of confidence, a lot of self-image,” Wright adds. He points to a young girl student who’s about 60 pounds and holds a bow as large as his son’s. “She shoots that amazingly well. You don’t have to fit into a stereotype. You can be a boy. You can be a girl.”

It’s also a fit for kids who like individual sports but miss the community of a team. That group feel is present both in camp and for archers who go on to travel with a club to competitions. The downtime between shooting builds relationships.

Trisha says she made friends with the girls she practices beside when they were all having an “off” day.

“We were all in the same line all right next to each other. We weren’t really that close of friends before, but we were making jokes, since we were all missing the target,” she says. “We tried to make excuses and it was all fun. You could make friends just by shooting next to them.”

Because the sport also involves watching teammates or competitors shoot, many archers say encouragement is another reason they love it.

“It’s an individual sport, but there’s a lot of encouragement,” adds Farmer, “so it’s self-gratifying when you improve your shot, but in the end you don’t feel that pressure of trying to win all the time.”

But is it safe?

At the Burgess-Shadbush Nature Center archery camp in Shelby Township, lead archery instructor Cameron Rieper says it can be nerve-wracking for safety-minded parents. “Usually the first day of camp a lot of parents come in and are worried about how the archery is going to be taught,” he says.

The children learn to listen to commands for loading the bow and firing arrows. By the end of the camp, Rieper says, they shout “ceasefire!” even before the instructors whenever another child stops shooting to collect his or her arrows.

“The kids are always keeping an eye out for each other,” he explains, “and a lot of parents are really impressed with that.”

If the thought of young children running around with equipment that can take down a full-grown deer still gives you pause, remember they’re in skilled hands.

The instructors at Riley, for example, have all been USA Archery certified and background checked, Farmer says, and take precaution to follow all safety procedures. The outdoor shooting range is flanked by wooden boards and the back wall has Kevlar netting, a material synonymous with military armor.

Archery is overall the fourth safest sport behind only ping pong, badminton and bowling, the Archery Trade Association adds. For youth specifically, the injury rate is 5.5 percent, compared to America’s pastime, baseball, with 41.3 percent.

“You can’t get much safer than that,” Farmer says.

Except, perhaps, in the case of that big banana target – which finally was retired about four months ago. “He was obliterated,” Wright laughs. But it did the job. “She had a blast.”