At Kids Camps, Uniforms and Dress Codes are Still the Norm 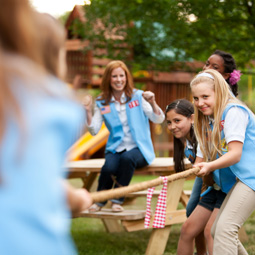 Clothing, makeup, swimwear and other personal accessories: What do they all have in common? A majority of kids’ summer camps regulate them.

All told, some 71 percent of camps recently polled by the American Camp Association enforce uniforms or a dress code. The survey assessed 361 camps – and only those that are ACA-accredited. Granted, the group only accredits 20 percent of “about 7,000 sleep-away camps” in the country, The Washington Post notes. But still, that’s a pretty strong showing.

Camps implement dress codes and restrictions for many reasons, varying from religious and moral beliefs to camper safety and environmental factors.

The camps that don’t have a dress code in place for their campers usually have one implemented for their staff. Camps usually rely on the counselors’ clothing to set a good example to the campers about appropriate dress.

The most common thing that has been given the boot from camp officials: Skimpy bathing suits.

“We are against things that are deemed inappropriate,” says John Carlson, executive director at Camp Copneconic in Fenton Township. “We don’t allow our staff to wear bikinis, just so we’re role modeling a little more conservatively. Same thing goes for campers.”

Instead of setting a specific dress code, some camps just suggest guidelines on the way campers should dress – not only at camp, but also in life.

“We live in a culture that doesn’t have a lot of discipline, and discipline has to be taught. We try to provide guidelines instead of mandates for our campers,” says John Grenfell, director at Simpson Park Camp in Bruce Township. “We ask our campers to look seriously into maintaining respectful modest dress even after they’ve left camp.”

Although the results also only represent a small number of the roughly 2,400 accredited ACA camps, the survey shows the strong number of sleep-away camps that recognize the original meaning of camp.

“It’s hard for them to understand the true value of camp,” adds Carlson, “Which is to experience a simpler, more relationship-oriented life.”