Classic Kids Camps: Getting Back in Touch with Nature 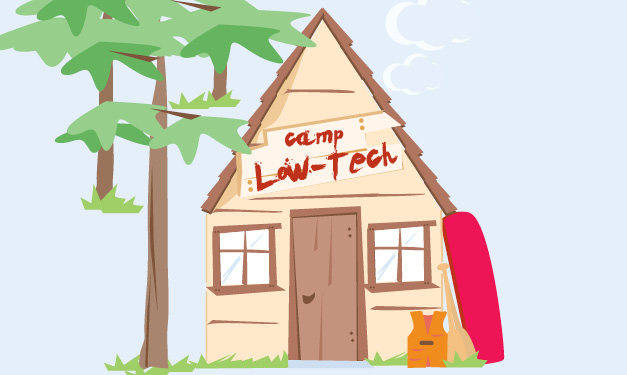 If you went to overnight camp 20 years ago, chances were you wouldn't see mom or dad until Visiting Day. Sure, you might get a letter or package at mail call, but other than that, kids at camp were disconnected from their parents.

But today, southeast Michigan parents can find their kids simply by pressing a button – even if they're 500 miles away in the wilderness. Cell phones, email, websites and other forms of modern technology have changed the ways we work and live. Camp is no exception.

Digital photos, for example, have replaced traditional photography programs at many summer camps, and pictures of campers are uploaded to the Internet where parents can get instant evidence that their kids are having fun. Pam Tepper, whose son Jason has attended Camp Walden in Cheboygan, loves that she can see camp photos on the web.

"This helps so much for parents who worry about their kids," she says. "To see your kids smiling and having fun is the best form of communication."

Parents also can contact camp directors online and sometimes have direct access to their kids. But some may ask: Doesn't all this technology defeat the purpose of going to camp in the first place?

Summer camps date as far back as the late 19th century, when more and more families were migrating from rural areas to cities. Parents felt it was still a good idea for kids to spend some time in the country in an outdoor recreational setting where they could develop independence and improve their self-esteem.

Today, these goals are just as important – perhaps even more so. Camp offers the ideal opportunity to appreciate nature and experience life away from the wired world at home.

That's why, according to the American Camp Association, most accredited camps don't allow campers to bring cell phones, iPods or video games, encouraging kids to be "unplugged" during camp. Individual camps often set specific policies regarding electronics and make sure campers and parents understand them ahead of time.

Why the tether is a problem

In an ACA article entitled "The Digital Umbilical," professional camp consultant and clinical psychologist Christopher Thurber explains, "Lots of campers will tell you they want unfettered access to all kinds of dazzling technology … and some parents will tell you they want unfettered access as well, but they are driven by a natural, overbearing desire to stay in constant, if virtual, contact with their progeny." He calls this developmentally unhealthy.

Plus, says Larry Stevens, one of Walden's directors, "The cell phone is a tantalizing option for a child to pass on gossip or misinformation, thus possibly upsetting a parent before the camp is able to look into the problem and discuss the situation."

There are other potential problems with technology, of course: It's easy to post inappropriate pictures online, which can lead to embarrassment for the camp, as well as cyber-bullying. Expensive items can get stolen, lost or broken. And campers can end up spending too much of their summer in solitary, sedentary activities.

Basic, with a digital upgrade

Harvey Rubenstein has worked at Walden since 1973, and spent 24 years before that at Michigan camps including Hiawatha and Tanuga. He explains, "If a summer camp is doing its job, it's not only teaching skills and providing a safe recreational environment, but also giving children the chance to begin to function independently while away from home.

But that doesn't mean camps have to avoid technology altogether. In many ways, it helps. Cell phones allow staff members to communicate easily while in boats or on trips. Better communication means greater safety, especially in cases of emergency.

The web facilitates ordering supplies and discovering new programs, and it sure makes predicting the weather a lot more accurate than running out to the meadow during breakfast and looking up into the sky to see if a storm's blowing in.

Liz Stevens, one of the assistant directors of Walden, loves her CampMinder software program, which allows her to accept applications online and compile important information directly into a database.

"The feature parents will probably use the most is the one that allows them to log-in to their own private account to view and buy camp photographs online, read camp news and email their campers," she says.

No, campers can't email back – but they are encouraged to write home at least twice a week.

"Many of the campers get emails, which we distribute along with the letters," says Laurence Cohn, director of Camp Maplehurst near Elk Rapids in northern Michigan. But, he adds, "There is no substitute for packages filled with goodies delivered by mail."

Walden communicates with parents about two-thirds of the time through email. But it aims to speak with new parents by phone or meet them in person, and not rely on the computer completely.

"It's easy to always shoot off an email," Stevens says, "but it's less personal, too. When you talk to someone over the phone, you hear the tone of their voice, and there's the opportunity to ask and answer questions that may lead to other topics or issues.

"It's how you get to know the family whose child you'll be responsible for that summer," she adds. "You can't get to know someone over email – at least not the way we need to know them and vice versa."

As is the case for many things, camps are finding that moderation is key when it comes to the use of technology.

If used wisely, technology can enhance the camp experience by providing a world of new ideas to help kids learn skills, develop independence and make friends, while freeing up time to focus on what's really important. But too much technology can do more harm than good.

Sure, technology has had an influence on the overnight camp experience – just as it has on the rest of the world. But a well-run camp is proof that there is still a place where you can sit around a crackling campfire – and the only things glowing are the flames and the stars.