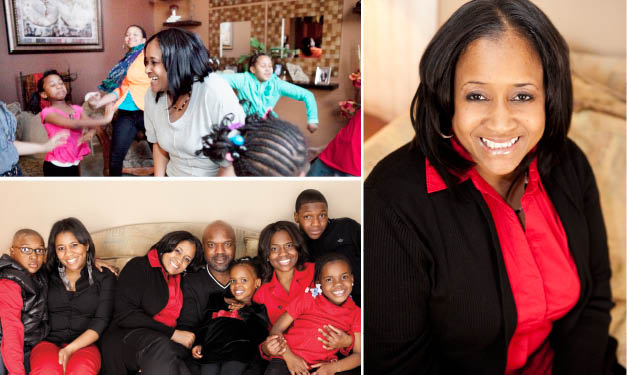 When it comes to show business, it’s a family affair in Tonya “Touchdown” Dallas’ household.

On an average day, which begins at 5 a.m., Dallas can be found driving from audition to audition and telling stories at local libraries, the Detroit Institute of Arts and places in between. For 10 years, she’s been a storyteller, voice-over artist, actress, acting coach – and, now, executive producer of an in-the-works reality TV show. Oh, toss in mother of four and grandmother of two.

“When I was acting, I would run lines with my kids,” Dallas says. “After so many times of them helping with my scripts, I noticed that they were kind of good at this. I submitted them to an agent and they were accepted.”

The showbiz bug bit her sons: Brandon, 9 and Bryan II, 13. You’ll often find the family practicing lines in their 2010 Dodge Journey while heading from one audition to another.

“I taught them early on that we do this for fun, entertainment,” she says. “If you get a callback, woo-hoo – but we’re not doing it for Hollywood or for a check.”

A couple of years ago, Dallas began an acting workshop in Van Buren Township to help other young thespians. What began with just a few kids grew to more than a dozen. It was only supposed to be several classes, but parents told Dallas she couldn’t stop. After a while, she started doing it at her Belleville home. Her First Impressions Acting Studio is slated to be open in Canton by April 2013.

“It can be really busy,” Dallas says of her life and career. “What I do like is that I don’t have a desire to be a big Hollywood actor. I’m fine with being a Michigan actor. As a family, that’s where we gel. I have the support of my husband and the older kids.”

Learn about Tonya Dallas’ First Impressions Acting Studio in Canton on Facebook – and, for details on her in-the-works Behind the Scenes TV reality show, email tonyadallas@gmail.com.

Her husband, Bryan Dallas, is all right with being the “Stedman to my Oprah,” mom jokes. The couple has been married 10 years, together 20. He knew his future wife was a talker the moment they met – which is perfectly fine for his quiet persona.

“I always like to go to sleep early, and I don’t have to take any drugs. I just tell her to go ahead and start talking,” quips dad, a pipefitter for Chrysler. “I’m the roadie. I’ve always been a fan of my wife and her gift.”

He’s not interested in the acting aspect of it, his wife says. Instead, he assumes the manager role, “making sure we’re not mistreated and taken for a ride,” she says. “For us, it’s been a balance.”

Her middle-name moniker, “Touchdown,” fits her success. Speaking of which, where did that come from?

“My husband’s best friend came up with the name,” Dallas says. “I don’t have my audiences clap after my stories. Instead, they put their hands up and yell, ‘Touchdown!'”

Her first “play” – and entry into the biz – was a fluke. While Dallas was working as a secretary at Wayne State University in her mid-30s, a passerby heard her speaking on the phone. The person stopped and told Dallas she should do voice-overs.

“I had never even heard of what a voice-over was,” Dallas says. “I went to a class workshop … and eventually I went to Tom Force (professional voice-over artist) and took some classes with him. That’s when the voice-over thing took off.”

Given her theatrical roots, Dallas says people have told her numerous times she needs to do a reality TV show. But she didn’t want it to be just about her family. So Dallas decided to take on the role of executive producer for her Michigan-based reality series, Behind the Scenes. The show follows the lives of a dozen children, including her son Brandon, their families and their quest for a successful acting career in the state.

“I never wanted it to be on me. I would always rather it be on the kids,” Dallas says. “Let’s do it on kids that want to pursue acting; kids that may have some experience or no experience. You don’t have to spend thousands of dollars on good training.”

The kids’ ages range from 6 to 13. Every Thursday, the little actors and their parents meet at Dallas’ home. They have dinner and spend time together. They work from 6 to 11 p.m. to practice acting styles and exercises. On the show, you’re not going to see kids fighting with one another, Dallas says; you’re going to see kids helping each other.

“I have a little girl who’s here because the parents noticed she was very shy,” she says. “At the beginning of class, she was crying, and by the end she was interacting. Three weeks later, she auditioned for an agent.”

But the tough part is getting the show, which Dallas would like to finish by summer, off the ground. The average cost to film a low-budget pilot episode is $35,000. Dallas says she’s had some offers, but they weren’t the right fit. She doesn’t want a scam artist or someone who will take advantage of the kids.

“I don’t know who gave Honey Boo Boo her money, but they can come here,” Dallas jokes. “We need some backing. We can do bake sales and fundraisers until we’re blue in the face, but it won’t get us there.”

For now, maintaining a busy lifestyle – which also includes self-publishing her first children’s book, Papa & Nana Sure are Strange, due in early summer – has worked out very well for “Touchdown.” It’s even given her another nickname.

“They call me ‘Vampire Lady,'” Dallas says, “because they wonder when I sleep.”