Anxiety Disorders and Kids: How to Identify and Handle Them

Little pain, big problem. Here's how to determine if your child has an anxiety disorder and what you can do to help him or her. 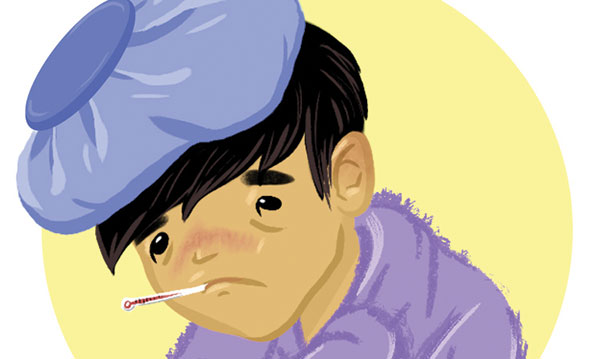 In an old Tom & Jerry cartoon, a lion steps on a splinter, yelps and overreacts. It’s an exaggerated example of illness anxiety disorder, formerly called hypochondriasis. But in reality, the issue is serious – yet tricky to pinpoint especially with kids, whose worries tend to grow as they do. Is your child fixated on aches and pains? Here’s some insight.

Fortunately, “For most kids it’s not an issue,” says Dr. Joel L. Young, psychiatrist and founder of The Rochester Center for Behavioral Medicine in Rochester Hills. “There is a subgroup of children who develop this condition. They become very anxious and apprehensive about having illness.” Family history is one factor.

“When we talk to the parents, they not uncommonly say, ‘Yeah, I had something like this when I was a child,'” Young says. “Other times, the child has seen someone be ill or experienced illness. Maybe a grandparent. They see a negative outcome that could be persuasive and trigger an episode.”

The disorder typically emerges in early or middle adulthood, Mayo Clinic notes. Only 2 percent of young kids have a severe form, says 2015 book Validity Testing in Child and Adolescent Assessment. Symptoms can emerge as young as 5.

If your child consistently complains about pain or letting the issue affect school and social activities, notes Child Mind Institute, this could be a red flag. “They make their life simple,” Young explains, trying to avoid school and friends. They may frequently request to see a doctor, check their bodies for issues, fall into an Internet-research wormhole or ask if they’re going to be OK.

Consider, too, that this anxiety-based issue can exist with other mental health problems, including depression, according to Mayo.

Again, some worry about health is natural for most kids. “Early on, it’s good to get reassurance,” Young says. “Telling a child that the body can repair itself and that even if you feel like you won’t get better, you will.”

If it’s spiraling, though, and signs persist three to four weeks, Young suggests talking with a professional. Your child’s doctor is a good start, says Dr. Eileen Pokriefka, a pediatrician at McLaren Macomb in Mount Clemens. “It certainly would be what we call a diagnosis of exclusion,” she says. “You do have to rule out significant illnesses or injury or (find out) if the child’s reaction was out of proportion.”

From there, some kids are recommended to a clinical social worker or psychiatrist like Young. Cognitive behavioral therapy might be in order or medication like Zoloft or Prozac, Young notes. Relaxation techniques, physical activities and avoiding excessive Internet searching can also help, Mayo says.

Ultimately, the doctors agree, listen to your kids. Assure them they’ll heal – but don’t ignore it if they refuse to leave it alone.