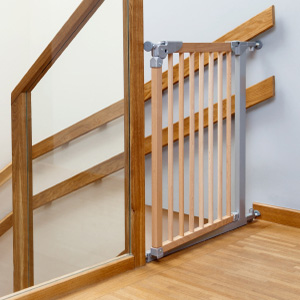 Wrap up the sharp corners and block the stairs, because baby is mobile! But parents should be aware, new research says, that the incorrect use of baby gates can cause injury.

The study, from the researchers in the Center for Injury Research and Policy at Nationwide Children's Hospital in Columbus, Ohio, was published in the May-June issue of Academic Pediatrics. It found that injuries associated with the use of baby gates nearly quadrupled – from four out of 100,000 children in 1990 to more than 12 in every 100,000 in 2010.

That means now, every year, nearly 2,000 kids ages 6 and under receive emergency room treatment for injuries caused by the gates, according to the Huffington Post.

"More than 60 percent of the children injured were younger than 2," a press release for the study says. "They were most often injured by falls down the stairs after a gate collapsed or when it was left open, leading to soft tissue injuries like sprains and strains and traumatic brain injuries." For kids ages 2-6, it added, injuries most often resulted when they tried to climb the gate.

What's going on? At Children's Hospital of Michigan in Detroit, most of these injuries are caused because a baby gate was not installed properly or was left open, says Roberta Davis, education coordinator for the Kohl's Injury Prevention Program.

"We get sprains or bruises, but some of the in-patient care that we've seen are broken legs and arms," she says. "Mom went through the gate with a laundry basket, and baby followed."

Though the study found that injuries are on the rise, Lara McKenzie, Ph.D., the study's co-author and investigator in the Center for Injury Research and Policy, does not think baby gates should be done away with. Instead, she recommends parents be aware of what type of baby gate to use at the top of the stairs, and remove the gate once the child turns 2 – or learns to climb it.

Davis agrees. "Kids will climb, and if they didn't climb today, they may climb tomorrow," she says.

The findings of this study do not mean baby gates should be eliminated from in-home safety rituals. But if a baby gate is needed for your home, a little research may be in order to find the right gate – and learn how to install/use it correctly.