5 Best Pets for Children with Allergies

Fish are popular choices, but there are also certain dogs for children with allergies. Get the details here. 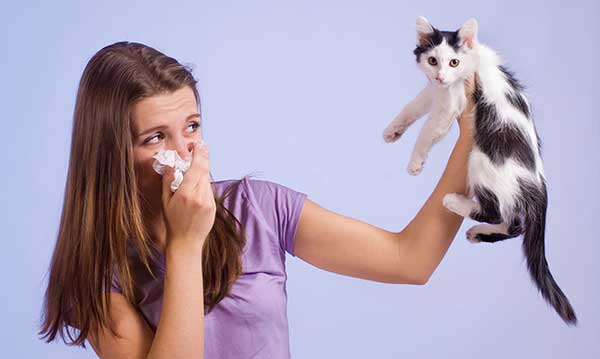 The bond between kids and their pets is one of the sweetest things you can witness as a parent. We discussed pet ownership – specifically the pros and cons of owning an exotic pet – in the May 2015 issue of Metro Parent. And, whether it’s a boy and his dog or a girl and her rabbit, connecting with and taking care of a pet is an experience many families want for their kids.

But when your child has allergies, adopting a pet can be much more complicated. It’s hard enough just going to other people’s homes and worrying about what allergens they might encounter. How do you choose the right pet to bring into your currently allergy-friendly home?

“We get that question quite a bit actually,” says Dr. Devang Doshi, a pediatric allergist, immunologist and pulmonologist at Beaumont Hospital in Royal Oak. “People want pets and if they have some underlying history of allergies or asthma it’s more important to know what pets are ideal or safe.”

Planning in advance for pets for children with allergies is key, Doshi says, as the last thing parents want to do is adopt an animal only to have it cause problems for their child.

“Getting rid of a pet and doing the whole clean up at home is a lot harder,” he says, pointing out that some families have needed to make that choice due to allergies. “It’s hard on everybody. [Pets] become part of a family.”

If you know your child has allergies, you may have already had him tested for which pets would pose a problem. If not, ask your allergist if testing is an option. Allergy testing can be used to check for allergies to almost any animal or it can be used to rule out any current animals in the home affecting the child.

“The most common pet allergies are cat and dog,” Doshi says. But he has seen people allergic to guinea pigs, hamsters, gerbils, pet mice and horses. “Anything with fur can potentially be an allergen.”

Plan ahead by exposing your child multiple times to the type of pet you’d like to adopt. When considering dogs for children with allergies, spend time around the specific breed.

“The more they can get exposed to that particular pet in advance before firmly committing to the pet and making sure that everybody’s fine with it, the better,” Doshi says.

Unfortunately, people can also develop new allergies at any point in time, he says. Remember that treatment is an option for allergies in people as early as age 6.

“Immunotherapy or allergy shots can train a person’s body to get used to that pet,” Doshi says. And with cats, veterinarians can sometimes prescribe drops for the cat’s food that help make their coats less of an issue for people with allergies.

“There are always different options and things we can do to hopefully make people feel better,” Doshi says.

Here’s a list of five pets that may work for children with allergies – every child is different, so do your homework first. Some of these may also be allergy-friendly. Find the exotic pets feature here.

1. Fish. “Fish are probably the best pet to get,” Doshi says. They won’t bother anyone with allergies, they don’t affect the home environment and they’re nice to look at, he says. “Granted you can’t take it for a walk but it’s not going to make you sneeze or wheeze.”

2. Reptiles. Frogs, snakes, geckos and lizards can be fun pets and they’re allergy friendly, Doshi says. If you’re considering a turtle, though, be careful because they can transmit salmonella and other bacterial infections, he says.

3. Dogs. Breeds like the poodle, some terriers, the bichon frise and the Portuguese water dog are often considered great dogs for children with allergies. No dog is 100 percent hypoallergenic because the dander on their skin can be an allergen. On the bright side, “clearly there are [dog breeds] that are a lot lower on the allergy threshold than others,” Doshi says.

4. Rabbits. They do have fur and can bother some people with allergies, Doshi says. Rabbits don’t usually sleep on your bed or spend time in other areas of the home like cats and dogs, though, so the impact on allergies can be lessened.

5. Birds. These pets also spend most of their time in their own separate environment, so they’re less likely to affect people with allergies than some other pets.