BollyFit Founder and Mom Anuja Rajendra is On the Move 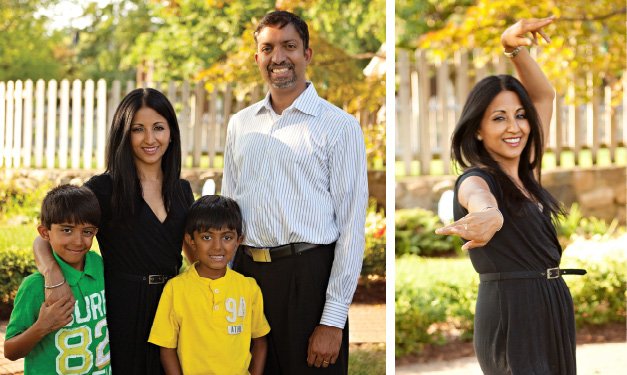 She grew up in Okemos dancing with her two sisters. She dreamed of going to Bollywood to star in the big musical productions the Mumbai movie industry brings to the screen.

But it took a wildly winding path – and a big ego struggle – to lead the Ann Arborite to create BollyFit, Inc.

BollyFit is a fitness class that melds mindfulness and an excellent physical workout with Indian dance styles like bhangra and Bollywood. Bollywood dance have been hot for of years, but BollyFit brings more than just movement.

“It’s a combination of dance, of community, of fun, of illumination – all of (it) together, all of us at our best, feeling alive and sweating, getting our exercise for the day,” Rajendra says. “We’re bridging cultural gaps, and different people with different backgrounds are learning and embracing this culture.

“It’s thousands of years old, and this makes it accessible to people who weren’t born of it.”

BollyFit is the latest step in her career path, which has taken her all over the country. Born in Lansing, she moved to India with her family as an infant. They returned when she was 6, settling in Okemos. She attended the University of Michigan and studied engineering and pre-med.

Shortly before taking her MCAT, though, Rajendra realized she didn’t want to be a doctor. So, after graduation, she decided to – no, not dance – work in sales for APC, a power-supply equipment company. Dynamic and bright, she moved into management fairly quickly.

But in 1997, while Rajendra was living on the East Coast and concentrating on her career, she got the call that would change everything.

Her middle sister had been killed in a car accident. She returned to Michigan – and stayed here. “I just didn’t have the heart to go back.”

Inspired by her sister’s memory, Rajendra opened Contemporary Art Lounge and Café, a place for people to do their own pottery painting or commission work from local artists.

“A lot of love went into it,” she says. “It was all about letting people create memories with their loved ones and enjoy that time with them.”

Her husband’s path then led the couple on a North Carolina detour, where he was earning his MBA at Duke. She worked for a tech startup. Then, after bouncing back to Michigan, Rajendra headed up development for a major nonprofit and returned to U-M for – nope, still not dancing! – an MBA, too. She interned at Lehman Brothers and lived in New York and Chicago.

“I knew I didn’t want to work in the banking sector,” Rajendra says. “But I wanted to extract as many experiences as I could out of there.”

Then, almost right after graduation, where she was commencement speaker, she got pregnant with her first son. A second soon followed.

Career mattered a great deal, but Rajendra wanted to be home with her little sons, too. She’d also gained 65 pounds with her second pregnancy and had a difficult delivery. It was in this state – she hadn’t danced in a decade – that, finally, dance reemerged.

Almost by accident. All around Ann Arbor, bhangra was hot. Rajendra jumped in and taught a class at 8 a.m. Saturday – the only time she knew she could get out of the house.

That was a lot of fun. So she added another one. And another.

“I felt something that had been dormant in me for many years, and I didn’t recognize what it was,” she said. “I didn’t realize how intrinsic a part of me it was.” But the pull of professional achievement lingered.

“Any time I wasn’t teaching, my ego struggled,” she says. “I felt I should be using my degrees. At the same time, I didn’t want to go and be in the corporate rat race. And I also knew I wanted to be an entrepreneur.”

After a year or so, she was able to let that go, and opportunities flowed. She was introduced to Olympic ice dancers Charlie White and Meryl Davis and choreographed a medal-winning routine for them. Then, she was invited to speak at a TEDx conference.

Next she opened BollyFit, and the response has been phenomenal. Instructors have come for training from as far as Mississippi.

One of the big pluses to being an entrepreneur and mom? She can set her own schedule and be available to her sons. Of course, striking a balance can be challenging – she’s started closing the laptop when her boys come home, instead spending focused time with her family. Her husband, who she counts as an inspiration, is very supportive, too.

“He just has no ego. For someone who is as intelligent as he is in his own right, he’s just always so happy when something happens with BollyFit.”

And there’s the other mothers she knows.

“It’s so interesting learning how they maneuver their lives and the choices they make,” she says. “There are so many amazing women around us, whether at home or pursuing careers.

“I am inspired by my friends, acquaintances and people in my classes,” she adds. “Each has her unique background and story, and I feel I take a little nugget from each of them.”

Naturally, her path isn’t stopping here. Rajendra was just appointed to the Michigan Governor’s Council on Physical Fitness and Health, and she’s excited to fill this role.

In short, Rajendra has followed her instincts – and likes where they’ve taken her.

“I’m enjoying the ride with my kids,” she says, “and enjoying a life that my husband and I have carved out for ourselves along the way.”

Try out an Indian-inspired BollyFit dance fitness class for yourself (they have BollyFit Kids offerings, too!) in the Ann Arbor area.

Photos by Kristen Hines
This story appeared in the August 2012 print edition of Metro Parent.