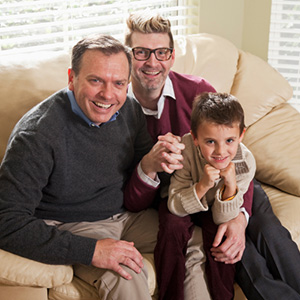 Some may think having two moms or two dads is unusual and confusing for kids. However, that’s not the case, according to a recent study conducted by the University of Melbourne. In fact, kids who have parents of the same sex actually have above average health and well-being – when compared to their peers.

Researchers surveyed 500 children of same-sex parents (315 parents were also surveyed – 80 percent were female parents while 18 percent were male) based on data from the Australian Study of Child Health in Same-Sex Families (ACHESS) and found that these kids scored roughly 6 percent higher than the general population on tests measuring their general health and family dynamic.

Meet a few of the same-sex couples raising their families right here in southeast Michigan.

“It’s often suggested that children with same-sex parents have poorer outcomes because they’re missing a parent of a particular sex. But research my colleagues and I published in the journal BMC Public Health shows this isn’t the case,” lead researcher Dr. Simon Crouch told the Washington Post.

His findings showed that on most tests measuring the child’s mood, behavior, self-esteem and mental and emotional stability, they were equivalent to the general population, but in specific areas like physical health and home environment, children of families with same-sex parents rated better than kids with male-female parent duos.

What is one of the main reasons that children of same-sex couples seem to be healthier and happier?

“It appears that same-sex parent families get a long well and this has a positive impact on health,” Crouch says.

Same-sex parents get along better because they share child care and work responsibilities – as opposed to traditional gender roles that heterosexual couples abide by. “This appears to be contributing to a more harmonious household and having a positive impact on child health,” Crouch says.

While most of the findings were positive, the study also found that stigma and self-consciousness played a role for two-thirds of these children. And this could continue to have an impact on their physical and mental health.

“Stigma can be subtle, such as letters home from school addressed to Mr. and Mrs.,” Crouch says. “Or it can be overt and very harmful, in the form of bullying and abuse at school.”

Today’s kids can start mapping out their career path as early as preschool. Here, a Macomb County expert offers insight on how you can take an active role in the development of your child’s future plans.
Read more
Advice