Many young athletes who play football, lacrosse and similar sports have had at least one concussion, the University of Michigan reports. What are the signs – and how can concussions be avoided? 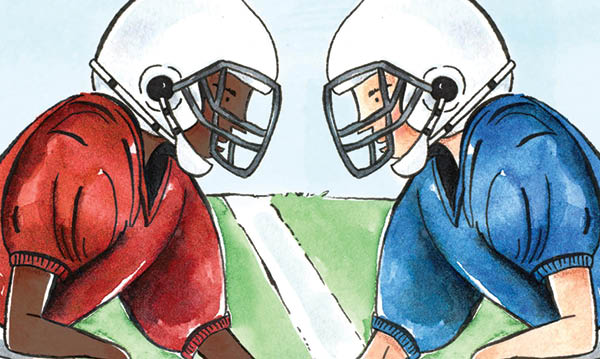 Football’s now-retired Brett Favre, hockey’s Sidney Crosby and basketball’s James Harden are just a few of the famous athletes who have suffered concussions in pro sports. While these men continue to live seemingly normal lives, not everyone is so lucky.

Take famed NFL center Mike Webster. His odd behavior leading up to his death at age 50 led to the discovery of a degenerative brain disease due to repetitive trauma.

And concussions routinely play out on smaller fields, rinks and courts, too, as middle and high school athletes compete in contact sports – an issue that has some parents calling for a total ban on kids’ tackle football. But there’s been limited information on the prevalence of concussions in adolescent athletes – until now.

Philip Veliz, an assistant research professor at the University of Michigan Institute for Research on Women and Gender, and his U-M colleagues took a closer look at these injuries, recently releasing the results.

In 2016, the question, “Have you ever had an injury that was diagnosed as a concussion?” was added to the Monitoring the Future, a national U-M survey, in order learn more about the prevalence of concussions among more than 13,000 adolescents in grades eight, 10 and 12.

It turns out 1 in 5 adolescents reported having a concussion in their lifetime, while 5.5 percent said they’ve had more than one.

As a sports medicine physician at the Henry Ford Hospital’s William Clay Ford Center for Athletic Medicine, Dr. Jennifer Trpkovski, D.O. is no stranger to concussions.

“With a concussion, usually there is some kind of trauma. There’s an injury either to the body or directly to the head,” she says.

With football, for example, a tackle that hits a player in the shoulder without his head making contact can still result in a concussion because of the force of the hit. That’s because it’s “a force to the body that’s large enough to cause a jostling up to the head where the head gets bobbled around,” Trpkovski explains.

If your child has sustained an injury, signs could emerge pretty quickly afterwards but can take up to 24 hours, Trpkovski says. “Sometimes it takes the adrenaline to wear off for the symptoms to come out.”

If a child is suffering from headaches, dizziness, nausea and light or sound sensitivity, it might be time for a trip to the emergency room.

Cognitive symptoms include tiredness, fogginess and difficulty remembering. “It can be any combination of those,” Trpkovski says.

And if the kid is having trouble remembering faces, confused about who is who, vomiting or has worsening symptoms – or if there is any fear of a neck injury – these are danger signs a doctor should address right away.

After suffering a concussion, kids should rest, so that means a few sick days at home.

“They can’t tolerate the busyness of the hallways and the noise and the lights and the computers and trying to focus and concentrate and read,” Trpkovski says.

“Make sure that they ‘shut down.’ There shouldn’t be any activity or sport. They should rest from phones, electronics, texting, computers – so the brain can rest and the body can rest and heal,” she adds.

Once kids are feeling better, there’s a return-to-play protocol to follow. It’s a day-by-day process. “There are about six steps, so that’s about six days when you’d be able to go back to sport once you’re clear from symptoms,” Trpkovski says.

If your kid is interested in playing football, lacrosse or joining the basketball team, don’t discourage him or her, Veliz says. Instead, have your child learn the techniques before jumping into one of these higher-risk sports.

“If your kid really wants to play football, think about putting them in flag football first,” he says, to learn skills and appropriate techniques to reduce risk.

Technique is important, Trpkovski says. Kids should be taught how to tackle properly in football and hit in hockey. Athletes also should make sure their helmets fit correctly.

Coaches are being asked to incorporate neck strengthening into sports, Trpkovski adds, which could be good for soccer players who head balls.

“If someone is going at a pace you’re not comfortable with, you can just switch partners.”

And don’t play through the pain. If you think you might have a concussion, Trpkovski says, “When it doubt, sit it out.”