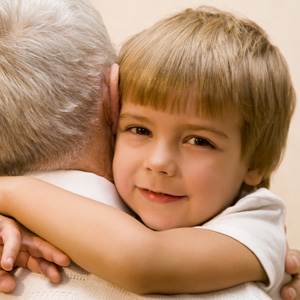 We know lots of parents are having kids later in life, and according to some studies, older dads have been linked to autism and bipolar disorder. But, more recently, a study from Clinical Endocrinology found that older fathers also impact a child's weight, height and cholesterol.

According to the findings, kids born to dads over age 31 were 2 centimeters taller than those born to fathers ages 30 and under.

Babies born to dads who were over 35 years old at their birth had lower body mass index (BMI) than kids whose fathers were 31 to 35. According to Med Page Today, the study notes that slimmer children who were born to older fathers will be at a lower risk for obesity in adulthood.

This then can mix with other substances and form a plaque that can make arteries narrow and less flexible. If a blood clot forms and blocks the narrowed artery, it could cause a heart attack or stroke. On the other hand, high levels of HDL have shown to protect against heart attack.

The level of HDL and LDL in infants is also affected based on the age of the father at the time of childbirth. The LDL concentrations in infants born to fathers over 35 were 11-percent higher compared to father’s ages 31 to 35.

LDL concentrations were 21-percent higher in infants born to fathers over 35 compared to fathers 30 years old and under.

Also, total cholesterol to HDL was higher among children whose fathers were 31 and older compared to those with fathers 30 years old or less.

Insulin sensitivity in girls was better for those who were born to dads ages 31-35 and those fathers over 35, compared to children born to fathers 30 or under.

The researchers noted that, "there are no clear mechanisms behind the less favorable lipid profile, though it could be that increasing age leads to epigenetic changes in paternal sperm genes that regulate growth and metabolism."