Deck the Halls with Amoxicillin: When Kids Get Sick on Christmas 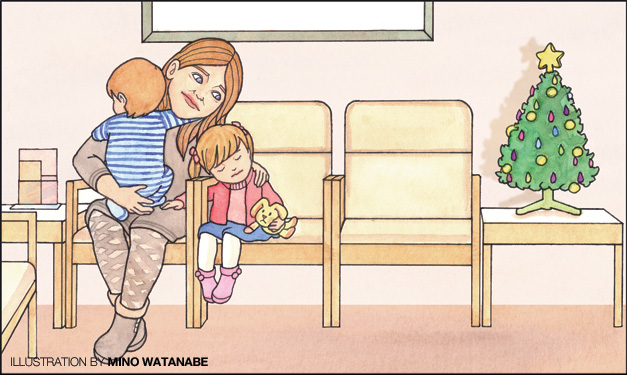 Christmas is for children. That’s what my siblings and I muttered in our single, childless 20s as we exchanged sweaters and gift cards and wished there were cute little ones tearing though toys and believing in Santa Claus.

Then I had children.

Chalk it up as one of those “nobody told you” factoids: Children’s immune systems don’t care about Christmas, and antibodies don’t believe in Santa. I’ve spent so many hours parked in my pediatrician‘s “sick room” flipping through FamilyFun magazine that I’ve considered myself a subscriber, even if I never did make those “quick and easy” holiday crafts. (As if snowman coconut cakes or hand-stamped holiday cards are either quick or easy … but don’t get me started.)

Our baby’s first Christmas was challenging enough. Our daughter was colicky, and I was, well, exhausted. I’m pretty sure she got a slew of gifts she couldn’t have cared less about. I know she looked adorable in her mini Santa outfit, because we snapped lots of pictures. The rest is a blur.

Christmases two and three must have occurred. There’s photographic evidence of them. We looked like we were having a nice enough time opening presents under the tree. If only I could remember.

Christmas of ’07 seemed particularly rough. That was the year we learned there are two more levels of antibiotics after that pink stuff failed to cure our son’s fourth or so ear infection. (They were tricky to count. Did he have four separate infections, or just one month-long infection with an occasional reprise?)

Then a nasty allergic reaction to amoxicillin on our daughter’s part introduced us to a whole new family of meds. That December, my husband brought the kids to urgent care so often, I joked that he might come home with a new toaster – or at least a punch card for a free peppermint latte.

Do you know who Bubbles the Fish is? Nope, he’s not the must-have toy of the season. He’s the apparently kid-friendly attachment to a nebulizer. Don’t know what a nebulizer is? Count yourself lucky. We found out on the fifth day of Christmas, when instead of five golden rings, we got a cold that settled into our son’s lungs in a crackly, wheezy sort of way. (By the way, a nebulizer is a sort of medicated vapor treatment for such a cold.)

Last year, we braced ourselves for a tough season, and not just because we can claim to be seasoned pros. Unfortunately, our 4-year-old son was diagnosed with lymphoma at the end of the summer. That made my Christmas list considerably shorter. And those small pharmacies we felt like we were packing for past holiday travels? They now seem like mere appetizers for what would come.

But the angst and struggle of sick children is a sort of reality check against all the marketing hype for a once-holy holiday. Although it can be miserable to muddle through some of those tiresome, sickly days, it’s humbling to watch my son troop through bigger challenges than a crowded Black Friday sale and still smile. And getting out the perfect gift or pristine Christmas card is hardly important when you’re holding an inferno of a feverish child to your chest, a child that doesn’t want a Barney or an Elmo … a child who simply wants you.

I might still take a stab at that crazy holiday to-do list – the tree, the gifts, the cookies, the lights that don’t work once you actually get them arranged. But then again, I might just read about it in holiday People. Meanwhile, I’ll hold out for the gift of hope and health.  Because after all, Christmas is for children.

This post was originally published in 2013 and has been updated 2016.