Dogs and Kids: How Dogs Help Childhood Anxiety and Asthma

Having a dog at home reduces anxiety and asthma in children, recent studies say. 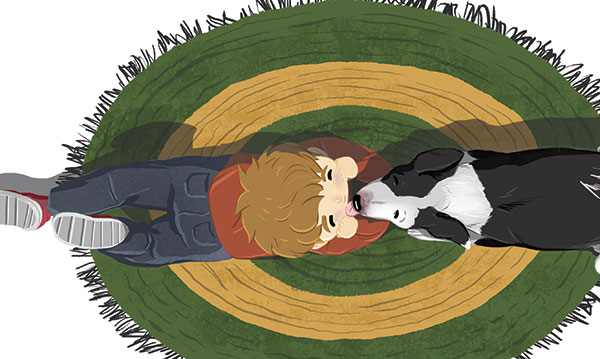 Are your kids begging for a dog? Welcoming Fido to the family could bring your brood some joy, but there are other perks. In fact, early exposure to dogs could make your kids healthier.

“We found that having a pet dog in the home was associated with less child anxiety,” says Anne Gadomski, a pediatrician and research scientist at the Bassett Medical Center in Cooperstown, New York. Gadomski is the lead author of a recent study conducted over an 18-month period at rural pediatric primary care settings in upstate New York.

These findings are just the beginning.

A second study, released in JAMA Pediatrics, found a correlation between dog exposure and a lower chance of childhood asthma by age 6. Could this be the hygiene hypothesis – i.e., immunity through exposure – at play?

Research has shown positive health benefits for adults who own dogs, but less was known about the impact pet dogs had on children’s health until now.

“We recruited parents of children who were ages 4-10 that were coming in for a well-child visit,” Gadomski says of the anxiety study.

To gather data, researchers asked parents to fill out web-based “screeners” with questions about body mass index, physical activity, screen time, mental health and pets. The researchers were able to get information on 643 children. Of those, 73 percent had pets and 21 percent did not, while the rest were missing pet data.

Interestingly, when it came to dog-less kids, 21 percent qualified for further anxiety assessment. That’s compared to only 12 percent of kids with pooches.

When you pet a dog, Gadomski says, the dog and person’s levels of oxytocin go up, which “causes cortisol related to stress to go down. That means that there’s an association here. We still have to work out whether it is cause and effect.”

As the study concludes, “Future studies need to establish whether this relationship is causal and, if so, how pet dogs alleviate childhood anxiety.”

In order to determine whether dogs – and farm animals – lower the risk of asthma, researchers in Sweden looked at a nationwide cohort study that included kids born between 2001 and 2010. They found a 13 percent lower risk of asthma in school-aged children who were exposed to dogs in their first year of life, Time reports.

Why? Researches noted the hygiene hypothesis, which says exposure to different germs is actually healthier for kids, could be part of the reason.

“You have a dog and it’s probably going to be outside and bring all sorts of pollen and dirt,” she says. This helps teach your child’s immune system what’s normal and what isn’t.

Pillsbury’s 13-year-old daughter has been exposed to animals all her life, including three dogs, and did not develop allergies – although mom isn’t sure she would have. Pillsbury believes it’s important to let a child’s immune system know what’s out there.

Before you hit the pet store or a local shelter, there are things to consider when adding a dog to your household. Pillsbury suggests doing your homework.

“I think it’s important to research what dog you’re going to bring into your house,” she says. Certain breeds – like chows – can be very aggressive.

You always want to be sure your dog is the right fit for your lifestyle and family’s schedule. Pillsbury also suggests teaching your kids about dog protocol.

“Don’t let them climb all over the dog. There’s only so much they are going to take,” she says. Poking the dog, pulling on it and trying to ride on its back are no-nos, too, so teach kids how to play nice with pets.

Still not sold? “If you weren’t sure if it was going to work for you or not, you could try fostering,” Pillsbury says. It’s a great idea, she adds, and helps puppies and dogs get socialized.