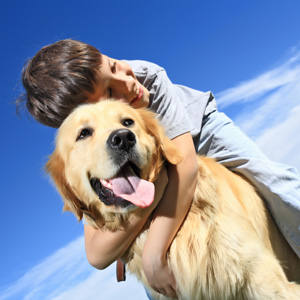 Let your baby get close to Fido without always breaking out the hand sanitizer. You may just thank your furry companion later in life.

According to a study by the University of California-San Francisco, pet dander from household pets can build a child’s immune system. The study, conducted under Dr. Kei Fujimura, found that when mice were fed a dust solution containing dog dander, their immune responses were better vs. other mice after respiratory syncytial virus (RSV) – a major cause of breathing illnesses in kids – was given.

When a child has RSV, she is at a higher risk of suffering from asthma in the future. The study notes that 90 percent of children are affected with RSV worldwide. In 2008, the Centers for Disease Control and Prevention estimated 254,583 children in Michigan had asthma.

RSV is a virus similar to the common cold, but for at-risk groups like premature infants, its symptoms can lead to bronchiolitis.

Dr. Milind Pansare, a pediatric allergist at DMC Children’s Hospital of Michigan in Detroit, says if a child is predisposed to RSV, she is likely to develop allergies later in life.

However, now experts are thinking consistent exposure to animals at a younger age can decrease the risk of allergies later in life.

“That exposure has to happen.”

From birth until six months – and up to a year – is the time in which a child will be most influenced by microbes to stave off possible allergies and asthma in the future. The body is being exposed to particles and proteins that train the body to accept this exposure as OK.

The takeaway (for now)

There has been other research in this area, too. Dr. Pansare says for about 15 years, different studies have been conducted with similar results: that pet dander can strengthen a child’s immune system.

And over-cleaning could actually have a negative affect on a child’s immune system by not giving them the proper exposure, DeGraw says.

“Parents don’t have to walk around with their kids on an everyday basis and think that every second they touch something or are exposed to a horse or dog or pet, they have to purify their body,” he explains. “That type of exposure is thought of as a bad thing now. Normal interaction with the environment is supposed to happen.”

But, Pansare adds, there’s still need for more exploration: “The next step will be to do a large population based study.”

In particular, the bacterium that is causing this immunity has not been identified.

“This study helps to foster a decrease in the general anxiety (over) children exploring and moving out into the world as a normal part of growing up,” DeGraw says. “Parents should be reassured by the studies over the years.”