Dry Drowning: What You Should Know

What is dry drowning? Or 'secondary drowning?' Is it something to be concerned about? A local doctor weighs in. 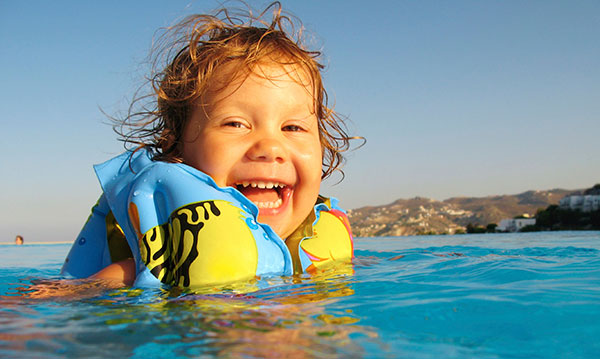 Ah, summer! In Michigan, the season brings visions of sunny days spent being lazy by a pool or one of our many wonderful water playgrounds. But, lately, dreams of summertime fun can turn into deadly nightmares. If the Centers for Disease Control (CDC) warning about Shigella sonnei, a “superbug” that could be swimming a in pool near you, and many articles about pool and spa hazards aren’t enough to scare parents away from swimming, a rare condition called dry drowning has been bobbing up in the news, too.

What should you know about dry drowning, and how can you help your kids enjoy swimming safely?

First, parents should be aware of this occurrence, but are urged not to worry too much about the possibility of an event of dry drowning, or another rare condition called “secondary drowning.” These cases make up only 1 to 2 percent of all drowning incidents. This is when water enters the airways and although water never reaches the lungs, the vocal chords spasm and close up as a result, cutting off the airways, WebMD explains. Something called secondary drowning is when water actually reaches the lungs, but the trouble breathing starts to happen later.

“It’s not even on my radar,” says Dr. Jaime Hope, a board certified emergency medicine physician at Beaumont Hospital in Royal Oak. Along with being the busy mom, Hope is also an assistant professor of emergency medicine at Oakland University. “As a parent, keeping them safe is more important.”

Whether ending in death or not, Hope favors focusing on avoiding any and all drowning events, or what doctors call “submersion injuries.”

“We have a pool, so this is a big issue for me,” says Hope. She points out that drowning is the second leading cause of death for young children, just behind birth defects. “We need to prevent drowning.” Hope’s husband is an ER physician as well. “We would love to never see another drowning kid again,” she says.

Pool owners should enforce safety rules, and restrict access to the pool, Hope says. Items such as a four-sided fence with a lockable gate surrounding the pool are necessary. Also, a locking safety cover to keep children out when adults are not present is good to have. Hope recommends keeping pool toys hidden away so that unsupervised children won’t be tempted and possibly fall into the pool.

Parents should remain alert and continue to keep a close eye on their children, even in public pools with lifeguards on duty, Hope advises. “I want to be the one watching my kids,” she says. Hope and the AAP say that the supervising adult should always be within arm’s length of children, providing what is called “touch supervision.” This adult should be focused only on the child, not socializing or involved in other distractions.

Wearing standard life jackets are preferred over flimsy inflatable devices, which Hope says can give parents a false sense of security. “If it can inflate, it can deflate,” she says.

Most people tend to think of a drowning victim as thrashing about in the water and calling for help. Not so. “When drowning, you don’t have the energy to do that,” Hope says. She would like caregivers to know that drowning tends to be quiet and quick. “It’s estimated that after 20 to 30 seconds, the victim will dunk under and not have the energy to surface again.” Hope points out that this is far less than the time it takes to answer a text or make a call on your phone.

Keep a close eye on your child for the 24 hours after having any problems in the water. Some of the symptoms seen after problems in the water include coughing, trouble breathing, chest pain and feeling extremely tired. “Parents of any child with any symptoms after a submersion injury need to seek help immediately,” Hope says.

“Drowning is a preventable problem we can all take ownership of,” Hope adds. “No family should have to go through this.”

Want to have some fun in metro Detroit this summer? Check out some of these hot July fairs and festivals Macomb, Oakland, Washtenaw and Wayne counties.
Read more
Health