Eczema in Kids: A Chelsea, Michigan Teen Shares Her Story

This chronic skin disease affects how millions of children feel, think, sleep and look. Take a closer look at this condition through a local teen's eyes. 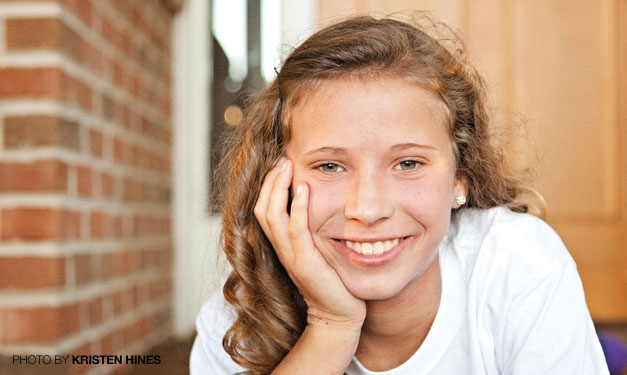 “Right now, I can feel the tingling in my ankle. I’m not going to itch it.”

When Jacquelyn Busch, 13, scratches, she knows what’ll happen. First, it’ll feel tons better. But a few minutes later, it’ll tickle again – worse – and she’ll have to keep attacking it, even if it starts to sting or hurt.

“If I scratch hard enough, it’ll really open and bleed and ooze,” the Chelsea teen explains. So she twiddles her thumbs or focuses on flipping pages in a book. She’ll smack, pinch, push or rub the area. Or she’ll apply cold water, ice cubes in towels, or pop a Benadryl.

But it’s crazy tough. It’s like when someone tells you they know a secret.

“The itching is worse than the cuts that you get.”

A prevalent issue in kids

For the 20 percent of U.S. kids with eczema (EK-zeh-ma), a chronic skin disease, this can be a daily, even minute-to-minute battle. Jacquelyn has the severe version. “Atopic dermatitis” is marked by itchy, dry, scaly skin – especially the elbow crooks, backs of knees and face, according to the National Eczema Association. On Jacquelyn, it “jumps.” Her ankles are the worst; then her knees, wrists and elbows. Recently, it’s flared on her face.

And it’s the first thing people notice, says Jacquelyn – a bright, green-eyed teen with dirty-blond hair who loves skiing, Glee and no-bake cookies. “Did I get sunburned? Why does my skin look like I’m a grandma or alligator?” are typical questions. “It looks kind of reptile-y. I just have a lot more wrinkles than everybody else on my knees and my hands. Creases.”

There’s no cure – yet. Still, there’s lots of support to help families manage it – and live full lives. That’s a message Jacquelyn, her family and other allies hope to spread during October, which is National Eczema Awareness Month.

As in so many cases, the itching started early, when Jacquelyn was only about 4 weeks old, recalls her mom, Carol Froczila.

“It was all the time,” says Frocilza, 46. “She was very ingenious. She’d scratch, and she would use anything she could,” from pointed Barbie hands to brush bristles – even Velcro on the infant mittens she wore at night.

“We were pretty desperate. Nobody was sleeping, and everyone was pretty miserable.”

At least 17 percent of kids experience eczema symptoms before the age of 5, the NEA notes. While roughly half can “improve” between ages 5 and 15, others, like Jacquelyn, may have life-long flare-ups.

The cause isn’t clear. But it often coexists with asthma and allergies, particularly hay fever. Physicians call this the “atopy triad,” since all three issues cause instant, hypersensitive reactions.

“People have different triggers,” adds Dunn. Jacquelyn, who’s allergic to nuts, pollen and pet dander, has to be careful with her two dogs – especially Bedo, a Chesapeake Bay retriever who lives with her mom.

“Me and him still play and everything,” Jacquelyn says. “When he sees my cuts, he licks. The licking makes me really react. I get patches of rash.”

Genetics can play a role, too. Froczila’s brother had eczema as a child, and some nephews and nieces had mild cases. Even she had a brief brush.

“I thought it was gonna be something she grew out of,” she says. “I didn’t think it was going to be so long-term, and every day.”

Managing and treating it

Bathing and moisturizing are especially time-consuming – yet critical to controlling eczema. “Every day, I probably say that I spend maybe a good hour on it,” Jacquelyn says. After a 10- to 15-minute lukewarm shower or bath, she gently pats dry. Then come all the creams. Greasy ointments, like Aquaphor, lock in moisture at night. By day, she uses lighter Eucerin or Vaseline, that don’t block her pores. “I don’t want to be all greasy for school. It gets really hot. It doesn’t really let my skin breathe as well.”

“She would fight it, like any little kid,” Froczila says. “It was hard to contain her. It was just like a greased little pig, trying to catch her.”

Treatments are a moving target, too. For some, a bit of bleach diluted in bath water is key. Coconut oil and UV light therapy have helped Jacquelyn.

Still, something may work for six months, Dunn says, then stop. “There’s this process of starting all over. That can be very emotionally draining.”

And appointments abound. Between her UV and pediatric allergy/immunology specialist, Jacqueline is at the doc’s up to twice a week. It adds up economically, too, Dunn says – between prescriptions, OTC meds and lost school and workdays. Yet the alternative is worse. Due to high levels of bacteria on the skin, improper care leaves kids more vulnerable.

Even then, things happen. One morning, Jacquelyn had a tiny mark under her armpit. By the time she came home from school, she was in a makeshift sweatshirt sling.

“It was just all raw – like it had burnt,” Froczila says. “It’s unpredictable. When the phone rings and it’s the school, you’re like, ‘Oh my gosh.’

“You’re just kind of always thinking about it.”

Scares can spiral into an ER trip and prescriptions for antibiotics. Fortunately, for Froczila, who co-parents with Jacquelyn’s dad over in nearby Ann Arbor, insurance has covered all the costs.

Clothes, sports and other challenges

Jacquelyn can’t wear polyester, wool or skinny jeans. Too tight; too hard to scratch. And black shirts show dead skin if she scratches her neck.

“It does sometimes get annoying that I have to put on cream all the time or that I look different from everybody else,” she says. “And that I can’t do certain things because of the way my skin feels.”

Stuff like that adds up. For vacations and sleepovers, she brings her own pillow and bedding, washed in fragrance-free detergent. When she goes on her eighth-grade field trip to Washington, D.C. this school year, she’ll need to bring an extra bag just for her creams.

“My school’s really good about that,” Jacquelyn says. “I have to go and put on my lotions and stuff, and they’ll excuse me from class.”

Sweat is a trigger, making sports tricky. Take soccer. A kid with hay fever out in the field is miserable. Then, add those abrasive shin guards.

That’s one reason Jacquelyn had to quit. Volleyball’s worked so far – though the kneepads can cause outbreaks. And skiing, which she’s done since age 3, isn’t too bad. Cold air helps her skin, and she removes layers if she needs to.

Puberty’s brought other skin challenges, like shaving and bra elastic.

Her wardrobe has lots of cotton linen. “Sometimes, I try to purposely pick an outfit that doesn’t show everything.” But this summer, she did start wearing more shorts and tanks – a big step. “I’ve gotten a lot better about that.”

Meeting other kids with eczema has helped. With her mom and older brother Nat, 16, Jacquelyn has attended NEA conferences, which include workshops for parents and a Kids Camp.

“It’s just really nice to be around a group of people who know why you’re doing this. They know everything.”

Mom can’t say enough about the NEA being a lifeline, too, like its online support forum, “The Scratch Pad,” and long-distance help from staff.

“I’ve called them over the years and cried,” she says. “They’re very helpful and supportive and compassionate.”

Last April, Jacquelyn attended her first Teen Camp, where she made new friends – and got advice for high school.

“People are gonna be mean and they’re gonna say things they don’t mean,” they told her. More so, she’s dreading having to explain, over and over, though she knows she has to.

“You’re in charge of the way you take something,” she says. “You can be so upset about it and it can bug you. Or say ‘whatever.'”

Peers have been unkind in the past. In kindergarten, she recalls, “People wouldn’t hold my hands. They thought, ‘Oh she looks terrible. If I touch it, I’m going to get it too.’ It’s not contagious. Still, they didn’t want to interact with me. It hurt my feelings. And just made me feel neglected.”

Luckily, bullying hasn’t been a problem. “I’m amazed: Kids tend to be more forgiving than adults,” Froczila says. “I’m surprised with what people at the grocery store say.” Like suggesting Jacquelyn use lotion or sunscreen.

“People try to be nice about it,” Jacquelyn says. “Just the pity – people say ‘I feel bad for you’ or ‘You poor thing.'” But she’d rather not be defined by it.

A book series called Under My Skin has helped, too. She loves that it shows kids with eczema like hers. It irritates her when ads or websites tiptoe around it.

“That’s the truth,” she says. “I think that people get scared of the way that we look.” But that kind of public awareness is key.

“That brings research dollars,” Dunn explains. “There’s a misnomer that it’s just a little rash. It’s much more than that.”

She’s only 13, but Jacquelyn seems like she’s in a great place. “Now that I’m older, I think I’m more accepting that this is the way I am,” she says.

Her doctors, family and friends have played a strong role in that.

“They just never were mean to me like some people. They’re just a lot nicer about it. I know that they care, and they’re going to love me either way.”

Says mom, “Her dad and I want her to have as much of a normal childhood as she can, and experience the things that she wants to.”

That, of course, comes with future worries. Like dating. “Jackie itches when she is nervous, so I am not looking forward to the nerves,” Froczila says. Career choices can be limited, too, based on triggers. But Jacquelyn – who thinks it’d be cool to be a doctor, lawyer or interior designer – doesn’t see her eczema as a limiting factor.

“Which is wonderful. And scary,” Froczila admits. “An adult has to let go. Your instinct is to always try to fix it or help her.

“She informed me last night that I need to trust her, and she can take care of it.”