Electronic Cigarettes: What Parents Should Know

These battery-operated e-cigarettes or personal vaporizers have gained popularity among adults and teens. What risks do they pose to kids? 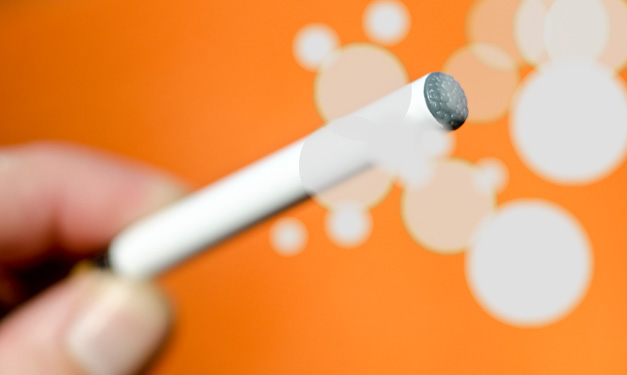 our kid may not be puffing on cigarettes, or hitting the hookah, but thanks to electronic cigarettes, he could still be damaging his health.

Also, known as e-cigarettes or personal vaporizers, these are battery operated devices, which hold replaceable cartridges of liquid containing nicotine and other chemicals. When activated, a heating element turns the liquid into a vapor that is then inhaled by the user. Nicotine in cartridges is used up after about 20 minutes of active puffing. E-cigarettes come in an assortment of flavors, like root beer or chocolate and have varying levels of nicotine. Some even include caffeine.

“Anyone using these vapor cigarettes are still ingesting nicotine, which has been proven to be a serious health risk,” says State Representative Rick Outman, a Republican who introduced legislation last fall that would ban sales of e-cigarettes to under age children in Michigan. “The use and sale of nicotine to minors in the form of tobacco products is already prohibited, and I believe the ban should extend to e-cigarettes, as well.”

Data from the Centers for Disease Control and Prevention 2012 National Youth Tobacco Survey shows that recent electronic cigarette use among middle school students rose from 0.6 percent in 2011 to 1.1 percent in 2012 and among high school students from 1.5 percent to 2.8 percent. The CDC notes that while use of e-cigarette products has increased, there was no significant decline in reported cigarette smoking or overall tobacco use by young people.

Nicotine is an addictive substance. The American Academy of Pediatrics is concerned about the risk of nicotine cartridges and refills posing a poison risk to children.

The Michigan Department of Health and Human Services (MDHHS) warns that the vapor produced, either from exhalation or emitted from the e-cigarette itself, may not be safe. E-cigarettes contain varying levels of nicotine, a toxic substance known to contribute to heart disease and heart attacks.

“We would like to see e-cigarettes classified under the tobacco laws,” says Angela Minicuci, MDHHS’s public information officer.

Kincaid, who smoked conventional cigarettes for 40 years, does not sell e-cigarette products to anyone under 18 years old. “We self regulate,” she says. Kincaid, who has two teenage boys, says she advises customers to keep devices out of the reach of children and pets.

Parents should be alert for symptoms of nicotine overdose in children, particularly if there are e-cigarettes or nicotine gum or patches in the home.

Some side effects of nicotine include anxiety, breathing problems and upset stomach. At lower doses, nicotine may cause a fast or irregular heartbeat, while an overdose of the drug can cause a dangerously slow heart rate. Some symptoms of nicotine overdose to be aware of are confusion, cold sweat, seizures, tremors and pale skin.

Supporters of e-cigarettes say they are a better alternative to tobacco smoking and using the device may help smokers quit. Critics point out that the Food and Drug Administration has not approved e-cigarettes. The FDA contends that e-cigarettes meet the definition of a combination drug device product and therefore should be regulated by the FDA.

Critics also note that e-cigarettes may have health risks and could encourage kids to smoke tobacco. This belief is shared by many parents nationwide. According to poll results from University of Michigan Mott Children’s Hospital National Poll on Children’s Health, nearly half of parents are concerned their child will try e-cigarettes, and 86 percent of adults support prohibiting the sale of e-cigarettes to anyone under age 18.

How busy moms can really — and should — make time for themselves.
Read more
Sponsored Content